There are basically two kinds of girls in VietNam. One is a prostitute and the other a poster girl for Acme Chastity Belts. Because the VietNamese gossip ruthlessly, few “nice” girls are prepared to be seen with a foreign male, a shame because they are picture perfect, the benchmark for sensual femininity. The two-piece traditional VietNamese dress, the Ao Dai (pronounced “ow – yai”), covers from the neck to the feet. The top is a tight fitting knee length blouse, slit on either side from the waist. Baggy legged slacks fit snug in the derriere. The light, flowing silk teasingly catches and clings to delicate curves or, according to one VietNamese beauty, “covers everything and hides nothing.” How right she was. The women augment their seduction with an innate, delusion-inducing look (that is all thunder and no lightning) that leaves the foreign male with the feeling of an impending inevitability of getting laid at any moment. These beguiling, unattainable little kittens only added to feelings of puzzlement.

The tourist ghetto in Saigon, Pham Ngu Lao (pronounced Fum New Lao) Street, becomes its own little village. The bar hookers would see a new face and probe for possible business. After they realized the latest cash cow gave no milk, they relaxed — or gave up. One particularly attractive independent contractor mired in a bad spell of business complained one night. I lent an ear but declined to mention that maybe her sitting alone at the end of the bar picking her nose so deeply I had fears her face may cave in had something to do with her lack of success. To break a VietNamese’s finger, punch them in the nose. All members of an opposite sex can be divided into two categories: they are either a Yes or a No. A definite No, and about as sharp as the edge of town, came to me every night for weeks on end with the same line, “You and me, we go hotel, 50 dollars.” I wouldn’t have gone with her if she paid me. Nevertheless, she couldn’t figure out that $50 US, plus a hotel, is more than anyone is prepared to pay among VietNam’s wall-to-wall low prices. Dropping her bottom line to, say, ten bucks would score her two to four tricks a night with the horny toads passing through town — good money in a country where 40 to 60 dollars a month is the going rate for a real job. One night, as she approached, I readied myself for her bid. Instead, she took my empty bottle, wiped the table, and looked at me like it was my fault she was, ugh, working in a bar. Another equally unappealing tart and a real broad was particularly forthright. Market value — 20 bucks plus hotel. She waddled up to a guy and fired her opening salvo. He turned the tables and undercut her, a seat sale as it were. “No, no, no, you pay me,” he shot back. “You give me 10 dollars, we go hotel, I make you happy, you very happy, you feel soooo good, you pay me. Only 10 dollars!” “VietNamese girl no pay! Girl in VietNam never pay! Only man pay in VietNam!” she cried out in the company of Elainesque pushes and punches. With extravagant stomps, she fled to one of her colleagues at the other end of the bar. The ally nodded and gasped in genuine compassion as she learned more details, for she had witnessed the audacity from afar. A sudden, unexpected rash of handshakes appeared before his eyes from a number of strangers who must also have tired of her annoying advances. A fifteen minute walk from Pham Ngu Lao Street, is District 1, or typically known to the VietNamese as “Saigon.” The hotels, restaurants, and bars are a notch higher and the prices at least double. The bar scene is typical where each sex trolled, and each sex is in competition, and pairs believe the bliss would never end. The major difference is greater displays of male chauvinism because the women are the more desperate camp. At night, walking meant bids from roving motorcycle hookers. Mr. Glenn, my Canadian pal, had no patience and was nothing less than misanthropic in his brush-offs. At first, I humoured the girls’ requests but after some time, VietNam’s many angles of exploitation tired me. Loaded with pathology, I began stealing rides in a futile attempt to fight back. “Where you go? You want massage?” she would ask. “Let’s go!” I’d call out, jumping on the back. She was thrilled at such an easy close. Vroom, down the street. “Go straight…now turn right…keep going…stop, STOP!” Her head spun looking for the hotel as I walked towards my next destination. “Thanks…see ya.” “No massage?” “Nope, thanks for the ride.” “Money? Money?” “Nah, no money.” Another pigeon wouldn’t heed my directions and steered away from Pham Ngu Lao Street. I reached in front, removed the key, we coasted to a stop, I hopped off, and returned the key. “Massage? Here? Where?” “No thanks, no massage.” “Money? Money?” “No, you wouldn’t listen, now I have to walk, no money.” She drove off. Le Duan Street runs in front of the former U.S. Embassy. The street girls line up at 20 yard intervals as if they’re all waiting for the same bus. Any ride on a cyclo after 9 automatically detours down Nguyen Du Street, and takes twice as long because of the hoards offering on foot in the darkness. One afternoon, in my hotel, the front deskman knocked on my door. “You have visitor.” “Send them up,” I said. “I can’t.” “Why not?” “She a lady.” “So.” “She a VietNamese lady.” “So.” “It’s impossible.” “Why not?” “Impossible, can’t do it.” He ran back down the stairs. Furious, I followed. I was working as an English teacher and my visitor was a student looking for help. `NO VIETNAMESE FEMALE MAY ACCOMPANY A FOREIGN MALE TO HIS ROOM UNLESS THEY PRODUCE A MARRIAGE LICENCE’ rang another rule from the posted boilerplate. The official excuse was it combatted prostitution. “Can a foreign lady go with a foreign man?” “No problem.” “Can a VietNamese man go with a foreign lady?” “No problem.” “Can a VietNamese man join a foreign man?” “No problem.” “What if the VietNamese man is a man prostitute or the two men are boyfriends and they have homosexual sex?” Blank stares, closed lips, and emergency paperwork. “So, a foreigner man cannot have sex with a VietNamese girl but a foreigner man can have sex with a VietNamese man in your hotel?” “Two men no have sex!” “Men don’t have sex together?” “No in VietNam!” The “mini-hotels”, real hookers, and cops are in cahoots with payoffs. Even VietNamese heterosexual couples rent rooms by the hour with only their ID cards, no marriage licence. Lead headline one week in The VietNam News, the state-run English language newspaper: PROSTITUTION ELIMINATED IN HO CHI MINH CITY. 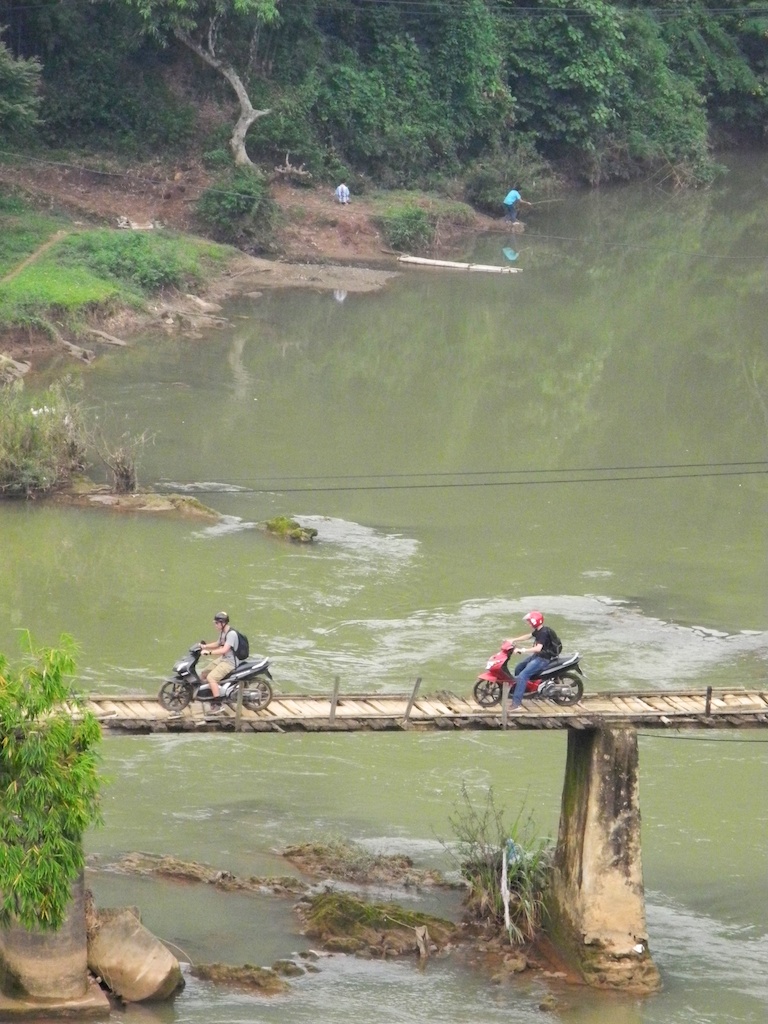 Hand it to the Capitalists