It’s small, expensive and difficult to get to; and that’s exactly what makes it one of the most beautiful and unspoilt holiday destinations on the planet. You’ll probably only get one chance in your life to go to the Seychelles but if you head out to the island of Praslin, Alex Black can guarantee the memories you take away from this tiny jewel in the vast expanse of the Indian Ocean will stay with you for ever

Stepping through the trees I came across a semi-circular bay sheltered by lush green palms. The pure white sand beach sloped gently down to waves the colour of which can only be described as that most over-used of sea hues: Azure. As I stood at chest-depth, the astonishing clarity of the water allowed me not only to see the my feet standing on the bottom, but also the shoals of tropical fish that swarmed inches away from my toes. Little wonder they voted Anse Lazio the best beach in the world.

The Seychelles International Airport barely looks big enough to avoid breaking the Trades Description Act. Anyone who wondered what became of the stuntmen responsible for the handbrake parking manoeuvres in The Blues Brothers will be delighted to learn they seem to have found gainful employment landing 747’s on a runway the size of a train platform. The ‘BA’ emblazoned across the jumbo’s flanks might as well have stood for ‘Brobdingnagians Airways’ as it loomed above the Lilliputian airport terminal.

Safely through customs (a small queue ending in a Coco de Mere stamp in the passport and a cheery ‘Welcome to Mahe’ from one of the three officials on duty), it was a short walk to the adjoining room marked ‘Internal Flights’. The ground crew stuffed our bags into the stern of the little twin engined Air Seychelles island hopper as we bickered about who was going to get the window seat on the half hour flight to Praslin.

I always get childishly excited by flying, but there’s something particularly irresistible about flying in a small plane over little tropical islands. I got the window seat two rows back from the wing struts and snapped away at little sand-ringed islands in Mahe’s marine park.

Although uninhabited until the mid-eighteenth century, the early history of the 115 or so islands in the Seychelles archipelago was one of mis-management, petty squabbling and near ecological disaster.

Initially colonised by the French, early attempts at commercial sugar cane farming were abandoned in favour of a far easier enterprise: tortoise catching. Weighing hundreds of kilos (to date the biggest known specimen on the islands is Esmerelda – a male tortoise who tips the scales at a staggering 320 kilos) these Triassic behemoths were exported in their thousands as edible ballast for the sailing ships of the eighteen and nineteenth centuries.

Not content with wiping out at least two species of tortoise, whilst the French and English bickered over ownership rights the early settlers quietly got on with the business of decimating the local coconut and timber populations too.

But in an admirable attempt to reverse some of their devastating ecological past, the Seychelles government has imposed stringent conservation laws since the nation’s independence in the 1970s. Although everything on the islands is relatively expensive, the extra revenue generated has enabled the country to preserve the remains of its native wildlife and where some island destinations have handed over their natural assets to wealthy real estate developers, the Seychelles have so far refused to swap virgin forest for high-rise hotels. This cannot be commended highly enough. In this case beauty may come at a cost to your wallet, but spend a week anywhere on the Seychelles and try telling me it’s not worth it.

On our fourth morning, as we sat at the end of the restaurant jetty tucking into strong coffee and a bizarre tasting pastries (imagine how a croissant would taste if it was made by someone who had French ancestry but lived in the middle of the Indian Ocean and had never actually seen the genuine article in the flesh – no, you’re still not even close), the hotel’s entertainment boss asked if we fancied a trip over to the tiny island of La Digue. Forty minutes later we were wading through the shallows to a 20-foot fishing launch with two muscular Yamaha Marine outboards growling in the stern and a grinning Jean at the helm.

Although La Digue is the third largest island in the Inner Islands archipelago, it only has a population of a few thousand and just one real road to speak of. A quick haggle over the hire of some bikes on the quayside of La Passe harbour and we were off, cruising around the old colonial house (complete with its particularly impressive tortoise pen) before settling down on Grand Anse beach for the obligatory swim/sun/nap combo.

On returning to La Passe, we found Jean had acquired a passenger. Rather than let her hang around for the more sedate schooner ferry, Jean had done the gentlemanly thing and offered Marie a lift back to Praslin. We sprawled out in the stern and took sneaky bets on whether they were a couple, flirting or just old mates (under questioning in the bar later that evening it transpired she was the latter, a revelation that obliged me to get a round in).

He dropped her off in waist-high water a couple of beaches before our hotel, and as she waved goodbye Jean gunned the engines and cruised past the six-figure yachts moored above the tide-line.

Promising ourselves we’d tackle the twenty five minute walk back to the hotel after the heat of the midday sun had abated a little, we hitched a lift with the hotel minibus to the Vallee de Mai forest.

The Seychelles’ position in the Indian Ocean means its climate and rainfall stay hot and low respectively all year round. But daily notices left in our room encouraging us to limit the use of showers and baths were a constant reminder Praslin was currently in the grip of a particularly serious drought.

Our driver Michael admitted droughts had become a more frequent occurrence in the past decade, and unsurprisingly the locals were suffering under far more stringent restrictions than us pampered tourists. What was being done to tackle the problem I asked?

‘The government talks of desalination plants,’ said Michael in his lazy Creole drawl. ‘That could solve the problem no question. But these things are expensive to build and even more expensive to maintain. If the government can’t find anyone to help them pay for engineers then they might just fall apart after a couple of years and we’ll be back where we started!’

If you think you’ve seen palm trees, believe me – you ain’t seen nothing until you’ve been through Praslin’s Vallee de Mai. A bite-sized chunk of prehistoric rainforest, this little World Heritage Site is home to Palmiste palms, huge semi-circular Chinese fan palms and the ever-present Coco de Meres; all hiding a plethora of exotic tropical fauna among their dense, overlapping fronds.

Carved through a dense rock face of vegetation, the winding track led to a waterfall so picture-postcard we initially suspected some bright spark in the Seychelles tourist board of an elaborate scam. By the time we reached the trail’s end, we half expected to see a Stegosaurus peering back at us from behind a moss-covered granite rock.

Saturday night’s sunset cruise took us to a prime snorkelling spot half an hour’s westward sailing from our hotel where we dived with brightly coloured tropical fish until the sun started to drop.

As the hotel’s little schooner headed for home, the setting sun provided a perfect layer of golden light sandwiched between the sea and the perfectly parallel layers of cloud that hovered above the horizon. We were escorted back to our little bay by a shoal of flying fish; their miniature wings buzzing as they twisted and turned through the air for far longer than a fish should really be allowed.

As we dried ourselves off and tucked into a vat of brutal rum punch the crew had thoughtfully stowed in the cabin before we left the hotel, the cares of working life seemed a million miles away. With another cloudless 30C day ahead, that’s where they were going to stay too – at least until we were strapped into our seats and blasted off from that ridiculously tiny runway again.

‘Top-up?’ enquired the first mate, inclining his head towards the large jug of dark fizzing liquid he clutched in a massive weathered hand. After a hard day exploring some of the finest beaches in the world, that sounded like an extremely apt suggestion.

2012 update
Ten years on Island Hopping in the Seychelles has become possible – and surprisingly affordable. Companies such as Seyvillas will help you explore the 115 islands, mostly uninhabited, that make up the Seychelles archipelago. 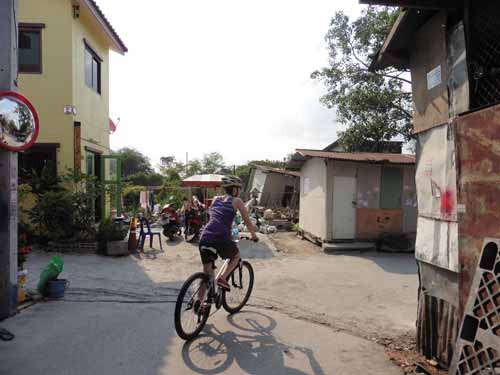