As the boat cruises slowly across the impressively encapsulated Lake Titicaca it is easy for passengers to forget that they are coasting at 3810 meters above sea level.  It would be easy forgive someone to think that they were effortlessly sailing along one of the world’s great seas.  The lake, at one point in time, must have been covered with a myriad of fishing boats.  Local people have netted these waters for the small native fish that live in its cold waters for years.  However, recently, these waters have been overrun by large kingfish and trout put into the lake as a more readily available source of protein.  And much like the new foreign fish that are occupying the depths of the water, a new foreign visitor is beginning to grace the surface of its waters as well.

The boat begins to approach its island destination.  Women dressed in brightly coloured clothing that has been inspired by traditional, Christian, and Muslim influences sit patiently along side the concrete dock awaiting their timid new guests.  As they sit, the women’s hands are in constant motion as they hurry to knit a locally inspired beanie which they hope to sell to their intrigued visitors.  The foreign guests nervously crawl in to meet their homestay mamas and then are quickly whisked away to be shown how the people live here on Amantani Island.

The truth is that most people who arrive to this remote island in the middle of the world’s highest navigable are somewhat expecting the local inhabitants to live in completely primitive conditions.  I’d like to believe that it’s not the case that people go to these islands in hopes of finding out that its occupants live in relative poverty, but I’m sure some travelers seek, and maybe even relish in, that situation.  The truth is however, that despite the traditional clothing, the jagged pre-Inca terraces, and stone walls that describe this island, many on the island are living quite a modern life.  Much of the new found “luxuries” that the local people are beginning to enjoy are a direct result of the growth of a tourism market.

Academics and journalist from around the world all so often discount travel as another arm of globalization’s or the “Western World’s” imperialism.  However, it seems that far too many dispel the possible positive affects brought in with the footprints of responsible tourism.  We sometimes live in a fantasy world imagining that tourism people would live their lives in peace, traditionally, sustainably, and happy in a world without the stresses of the “real world.”  It seems, however, that on Amantani Island I have found something to the contrary.

As I sit down with my homestay papa, who tells me he is fifty although he looks to be closer to seventy, I shake his hands and notice that they are warn and rough from long days working the terraces of potatoes and of corn.  He begins by telling me about how happy he is that we have come to stay with them, how much it means to their family to be able to earn a small wage.  “Tenemos todo que necesitamos (we have everything we need)” he tells me in a firm voice as if reassuring his pride as much as he is letting me that they don’t need us, “we can grow our crops, drink our sheep’s milk, and eat our chicken’s meat.”  But as he explains, life is much more comfortable than it has been in the past.  He has seen three of his sons run off to the city of Puno to work odd jobs for meagre wages amongst the noise and stress.  As they work in the city, he worries, they could lose their birth language of Quechua, their traditions, and maybe even their minds.

Tourism, here on Amantani, seems to be reinforcing the cultural norms of the people.  Each night a local dance is put on by the local population.  Locals and guests alike are dressed in traditional garbs as rhythmic tunes of pan flute, charango, and drums entice the people to share hands, beers, and dances.  Near the end of the night the tourists take seats along the walls of the community hall as the locals perform local dances describing work, love, and life.  It would be hard to imagine such a cultural exchange happening on a nightly basis if it weren’t for the groups of tourists who grace the island’s green turf each day.

Despite the anticipatory notion that travelers may have in regards to the island the houses aren’t rickety old shacks with straw thatched roofs.  In fact, the vast majority of them are well build cement painted houses, fitted with modern toilets and powered by modern solar panels; both of which are amenities only made possible by the boat loads of tourist groups and backpackers who seek to understand this lake culture.

As I sit down with my family for a final breakfast of pancakes, something I’m sure is about as Andean as sushi, my papa speaks again and I listen intently.  He tells me that he isn’t sure why we decide to come and stay with them, but hopes we return.  “I will always work this fields,” he tells me “and I hope someday my sons have the opportunity to return here to work them once I move on.”  His life on the island is peaceful yet rich in its own right.  But as his handheld radio beings to play Michael Jackson it is obvious that the modern world has found its way to this island and along with that a desire for a little bit more; a little bit more comfort, a little bit more luxury.  Despite our most romantic notions, there is nothing we can do to stop this desire, to deny the right of comfort and luxury.  However, tourism, it seems has begun to work in a way which can enhance both causes.  It enforces the local traditional ways of life, and at the same time provides family with a side pocket with some disposable income.

Amantani Island is changing; there is no doubt about that.  The houses are now painted with latex colors of pink, blue and yellow.  There are a number of well funded primary schools.  The houses light up at night with solar powered light bulbs instead of wax driven candles.  The hope is that somehow these modern amenities can be melded successfully with the tranquility of traditional island life.  The dream is that some day the sons of farmers will no longer need to seek employment in the chaotic streets of the cities, and will be able to start a family under the peace and calm of the thousands of stars that hang carelessly over Amantani Island each night.  It seems that with the help of responsible tourism to this island these dreams may be possible.

Brendan Van Son now produces photobooks and calendars that he sells on his own website. 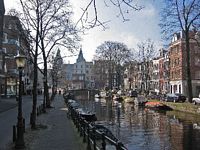 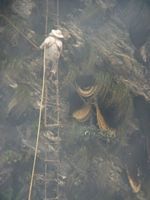 Hunting for honey in Nepal’s Himalayas