In England I am a beekeeper, and when I move my beehive I first remove its solid roof and attach a travelling screen; a screen that allows fresh air in to circulate around the hive. The hive entrance is secured and the bees are shut in their home until they reach its new location. On arrival the entrance is opened and the bees flow out like lava from a volcano, orienting themselves to the new place.
It is like this on the train (without the travelling screen because it is –18oC outside). Whilst my fellow passengers and I have the freedom to roam inside the train, the doors are locked shut for the hours spent travelling between stations. Each carriage has its own Chinese guard who stokes the coal boiler, maintains the hot water boiler, and, in our case, sells us Chinese beer and asks us to change $100 bills for his card games with the other guards. When the train reaches a station the doors open and we pour out on to the platform like lava from a volcano.

At the first station stop I stand on the platform and ask the Chinese guard ‘How many carriages are there?’

He looks at me and holds both hands up. ’10 minutes’ he replies.

This is my chance to take photos (there are times however when I am cautioned not to take photographs of some parts of the towns we visit) and stock up on food from the elderly Babushkas on the platform. These Babushkas sell meals of hot roast chicken and potatoes, fresh salads, bread, juices, dried fish, fresh cooked mutton parcels, beers, vodka, sweets, and even ice creams in -18 degrees winter cold (and yes, I did have one – I wondered if it would feel warm compared with the air temperature. Of course, it didn’t).

Moscow is on the eastern side of Russia. By the time I reach Mongolia I will have crossed 5 time zones and I will be 5 hours ahead of Moscow time. But the train runs on Moscow time all the way to the Russian/Mongolian border. At all the train stations along the way the clocks are set to Moscow time. So when I arrived at midday in Irkutsk the clock says 7am in the morning.

The train reaches the Russia/Mongolia border, and uniformed, gun-carrying guards parade through our carriage before disembarking. After crossing the border, a fellow passenger reads from his guidebook:

‘It says that two out of three border guards are so unstable that they shouldn’t be allowed to carry guns.’

People on the Trans Siberian train are making journeys, some just beginning, some almost over, each unique. Arthur James Llewelyn Watkins (I love that name) from Geneva fell in love with Japan at the age of 5 after seeing pictures of it in a book. Then he fell in love with a Japanese woman (by now he was 8 years old). Now at the age of 20 he is making the journey to the country he loves.

Wong from Beijing is travelling home from West Africa. He spends every day simply standing at the window looking out, sometimes singing Chairman Mao poems, always drinking green tea from a jam jar.

Chris left his home and his job in America over a year ago and travels the world without flying. When he reaches Beijing he will catch a container ship ‘home’ to the States.

Youngsters Emelia and Melina are backpacking the world for the first time from their home in Sweden.

Tom is leaving England to work in Australia.

And Anna? Anna wants to travel, to see something of the world, to see local people and local places, and to take the long slow journey to Nepal.

Aside from the carriage where my bed is there is a restaurant car. The menu is in Russia. Only in Russian. I am picking up the language now and can recognise a few words. I ask for chips and the waiter replies:

I love this carriage. I drink endless cups of chai (tea), watch the landscape trundle by, read and talk.

The journey on the Trans Siberian line is beautiful. I don’t want it to end. 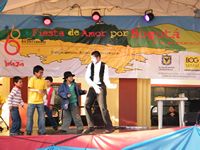 Bogota has a birthday