Somehow, I ended up the third party in a three-way betting war with a foul-mouthed bar owner and an alcoholic thatch farmer. It’s only 3 in the afternoon and already the cards are beginning to blur a little under the influence of Botswana’s local beer, but the King of Spades is on the table, and it complements the pair of kings in my hand. It probably won’t matter. I’m getting fleeced. In Maun, Botswana – a town commonly referred to as donkey town – I can’t shake the feeling that, today, I’m the donkey.

I’m a late starter in this particular poker game. The game has run every Saturday, without fail, for three years. It’s usually a locals-only affair in a tourist town, but it seems they make the odd exception, probably when they recognise an inept Aussie who is loose with his cards and looser with his wallet. It’s worth it – win or lose – to meet local characters like these.

The red-faced South African senior in the corner is called Weasel. He has the ruddy cheeks and trembling hands of a man who has lived most of his life with a few stiff drinks in his system.

Geno is spitting some creative four-letter combinations at Weasel. It’s not clear if that is because Weasel is taking too long to play again, or if Geno objects to cleaning up the beer that Weasel absent-mindedly knocked off the table. Weasel didn’t even seem to notice – for his part, he is weathering the salvos thrown his way with one bleary eye on his cards and the lecherous other on the ladies hockey tournament that is being played out on the TV above the bar. Geno’s barbs are falling off him like rain off a thatch roof.

Geno is the owner of this bar. A tall, dark Greek man of 50-something, he is gruff but shrewd. Like a man and his dog entered in one of those bizarre pet/owner look-alike competitions, this bar and Geno were made for each other: each of them slightly dinghy, maybe a little rundown, with beer on every internal surface. Still, something tells me that Geno is a player to be reckoned with.

Basil seems the most threatening player at the table. Fortunately, Basil still looks shell-shocked. Whilst having an allegedly magnificent time out on the town the night before, he bought six mokoros (traditional canoes) that, at the time – apparently – seemed an absolute bargain. Basil is a 60 year-old former architect, not a connoisseur of traditional watercraft, and in the light of day they look like firewood.

Basil got me my seat at this poker game. We got to chatting and hit it off a few nights before. There is something instantly likeable about this man; he is a mix of eccentricities and dignity, the type of character you’d get if Sir Ian McKellan had played Captain Jack Sparrow in place of Johnny Depp.

“They can be onsold”, Basil is telling the others at the end of the table who, sensibly, have already folded this hand. Will, a 25 year-old Kiwi bush pilot, gives Basil a resounding whack on the back and tells him to keep up the good work. If Weasel lacks steady hands, Will does not. He flies daily sorties into the ever-changing Okavango Delta, ferrying in a cargo of food, supplies and – worst of all – tourists. “Sometimes even French tourists”, he tells me, waiting for a sympathetic nod. There are a few encouraging murmurs as Basil outlines his plans to get his moneys-worth from his dilapidated canoes, but the guffaws of laughter that echo round the table every time Basil visits the bathroom suggests that these plans won’t float either.

“I swear to God you are actually retarded” Geno mutters, before turning his attention to me. “And you?”

Geno looks at me thoughtfully for a moment before throwing his cards in and pushing the chips my way. It’s a temporary reprieve. “Basil”, he asks with the briefest sideways glance at me, “if it’s tourist season again, remind me why we can’t shoot them.”

I’m pretty sure he is joking, and there is no need to flee town just yet. It might seem an unexpected sentiment for a place commonly referred to as donkey town – to be honest, there really are a lot of donkeys here – but: I don’t want to leave.

More by this author at www.findingemo.org. 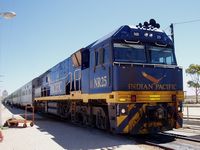 Across Australia on the Indian Pacific

A driving tour of northern Spain