It was August 10 and the provincial holiday of British Columbia Day. What better way to celebrate B.C. Day, I thought, than with an exploratory trip to Lasqueti Island, across from the Vancouver Island town of Parksville. During my childhood my family had spent every summer at a cabin across from Lasqueti, which itself blocks only a small portion of Texada Island. On clear days, the mountainous Sunshine Coast of the North American mainland is visible in the far beyond.

For years, my brother and I pestered my father to take us to Lasqueti. To us it was a floating strip of forest as mysterious and remote as it was frustratingly close. One summer we did load our bicycles onto the daily ferry at French Creek Marina, and made the sailing. For a few hours we slogged up and down a gravel road and returned home tired, hot, and dusty.
This time again, I took a bike. It was a cold grey summer morning when the passenger ferry pulled away from the dock at 9:45. I glanced about the cabin, noticing a young girl wearing a tie-dyed tee shirt and an old man in a red training suit. By the ease with which they entered into chatty conversations, I judged that most of the locals knew one another. Lasqueti Island, unlike Texada, is off the power grid. Many of the residents grow their own fruits and vegetables, like the homesteaders of over a century ago, and use bucolic exigencies such as outhouses.

Fusing my scanty childhood memories with what I had heard of Lasqueti being a haven for marijuana growers, I wasn’t sure quite what to expect. In a 2004 article (by Stuart Hunter in The Province) about that year’s cannabis bust by the Royal Canadian Mounted Police, an annual ritual that involves low swooping helicopters searching for crops of homegrown, the RCMP was cited as apologizing for calling the island “B.C’s ‘Marijuana Mecca.’” I suspected that the island’s isolation had contributed towards this reputation with outsiders.

The ferry docked at False Bay, near the southern end of the long island. A man waiting to board commented, “Wow! A clean bike! No gravel dust!” The few businesses and community facilities are clustered around False Bay. Near the dock is the Lasqueti Hotel, with an adjoining restaurant that opens at three in the afternoon. Further on along Main Road are a few crafts shops, a bed and breakfast, and the school. Then I came upon the first string of Tibetan prayer flags wrapped around tree trunks.

I began to notice a curious bartering system along the roadside. At the head of many of the private driveways were roofed boxes that reminded me (though the resemblance was weak) of the neighborhood shrines of places like Tsushima, Japan. Inside, behind glass-paneled shutters were tomatoes, eggplants, and peppers; or eggs ($3 a dozen), or loafs of bread, or plates of cookies. Each of these unmanned stalls had its own collection box.

I kept a leisurely pace, stopping to examine the old abandoned cars and trucks, many of them vintage models. There were also a series of signs nailed to trees, each dedicated to a different planet. The sign for Uranus showed a powder blue orb against a black backdrop, with the terse wording:

Gasoline is expensive on Lasqueti and vehicles can only be transported there through special arrangements, but even so I was surprised by how few I met on the road. Every driver that passed gave me a wave. My destination was Squitty Bay Maritime Provincial Park, at the southeastern end. The bay is magnificently protected, and there were several sailboats tied up along the dock. On foot now, I picked my way toward the furthest point of rock, past serpentine peeling arbutus, past dry yellowed grasses and wind-stunted trees. At a jam of logs between the rocks I set down my pack and rested in the shade. The logs were whittled smooth by the action of the sea, and tanned white by the sun.

With the satisfaction of occupying a private found place at the remote end of an undeveloped island, I began to realize the logic of those who make Lasqueti their home. From what I had seen so far each of the locals was a unique character, and each were here for different reasons. While appreciating the grand anti-establishment gesture of those who had decided to live on solar panel-powered homesteads, it seemed to me now that the island itself, abounding with rugged natural beauty, was its own perfectly sensible reason.

On the way back I stopped at the old cemetery. In the green, subaqueous shade, I found a curious rhyming inscription on the moss-worn foundation of a stone cross. The words resonated all the way back to the bay on the dusty, hilly road through the close forest.
IN MEMORY OF WILLIAM LAURENCE
PEMBERTON FISHER M.C.
LATE ROYAL HORSE ARTILLERY
AND OF RILLOCKBY IN NORFOLK ENGLAND
WHO WITH THREE OF HIS CHILDREN
(WHO LIE BURIED HERE) WAS LOST AT SEA
ON NOV. 11TH 1960 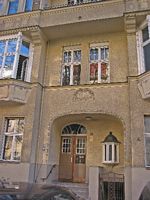 Back in time to a painful Berlin past