It is just about 10:30pm when the bus from Seoul arrives at the low-lit Jeungup City Bus Station in Chollanamdo Province, in the Southwest part of Korea, facing the Yellow Sea. Some taxi drivers ask “Taxi, taxi?” in the road past the fruit stands and family run convenience store, under the bare lightbulb’s dull glare, beneath a dusty roof held up by painted metal supports, a walkway partly enclosed in Plexiglas.

The street outside has some parked cars but little traffic. The handful of other passengers on the bus disappear quickly down side streets. Hotels are many near the bus station, and a couple of blocks over, past restaurants, a hardware store, a photo store, grocery, the miscellany of culture mostly closed for the night, windows darkened, metal bars pulled down over store fronts, there is the “Tae Pyongyang Hotel.” The “Grand Pyongyang Hotel” as its name is in English, is a white brick building five or six stories tall down a side-road lined with coniferous shrub-like trees.

When asked if indeed this “Pyongyang” of the hotel’s name is the same Pyongyang as the city in North Korea, the proprieter, a middle-aged, stout woman, assures me that it is. Since the word “pyong” an take at least three different meanings and “yang” at least seventeen, it was a good idea to ask.

This room in the Grand Pyongyang Hotel is like many in inexpensive lodging facilities here: yo, as requested (the Korean style futon), small refrigerator, TV of a vintage ten years prior, dresser with large mirror. Yet, the details of this room harken to its nomenclature.

There is a tray under the assortment of communal toiletries, cigarette tray, small office supply stand covered with food delivery advertisement stickers, intended to contain small sheets of paper, pencils, paperclips, but at the moment only containing a box of matches for the “Hannam Norebang-Music Room.” On one side of the box there is the name and on the other “Coffee and Cocktail” in English, along with in Korean, “Red Green.” Here is an encouragement to take part in the carnival-like social role experimentation that goes with the drinking territory, an indirect reference to post-Cold War red being turned into green in the previous USSR.

The plastic tray itself is of a curious design. Several cartoon chicks are hatching out of eggs, one of them placed in a special dish for soft-boiled eggs, waiting to be eaten, a perplexed stare on its face. A chicken in a blue bowtie, with a gun in each wing, is sitting, or apparently bouncing, on a wine cask. To one side is a smaller green bird (not a chicken), beak wide open, to catch one of the falling bullets. The English words on the tray read “Animal Land.”

The lotion and aftershave on the tray are a similar re-working of Western products combined with historical references. The two bottles of “X-Pert” brand are a re-tooling of “Pert Plus,” the American shampoo and conditioner “two-in-one” product. One of them, containing a white lotion, has the word “Quenam” under “X-Pert” as a kind of “Vietnam” reference. “Miss Quenam” is on the “X-Pert” bottle of semi-transparent aftershave, along with the words “skin lotion.”

On the bottle the fine print says, “It has been a stable leader in the men’s cosmetic category. It is formulated to provide fresh and clean.” Traditional roles of men and women could be the issue here, as the convents of these two bottles seem to have been reversed.

A painting and a circulating fan on opposite walls continue this theme, but in the guise of class struggle. A pastel blue fan in a wire cage is high on the wall above the refrigerator and television. Underneath, someone scrawled the phone number 533-2100, an indirect reference to studying, perhaps. (On the third wall, scrawled low by the door, is a note for the Da Sang Ta Bang, a tearoom, with the phone number 532-4747. Clearly one may find fulfillment in the tearoom, but it will be less than scholarly.

Then there is this painting or this painted print as it is, pinks and greens added to the black lines. It is next to some hooks on the wall. This picture is set in the Chosun dynasty. Three washer-women attired in colorful hanboks, the traditional Korean dress, look up from their work by a streak in the foreground, to watch a woman carried in a palanquin go over the bridge above the stream as it winds into the background and out of site. Another figure precedes the palanquin and a man in a yangban (literai) hat follows, and in the print embroidery livens the colors of the figures and trees further. That it is embroidered speaks of this as a woman’s artwork and a female concern.

Framed in simple black, centered in a cream-colored matte board outlined in a thin line of gold paint, this print is faded behind the glass and the wood of the frame chipped in places. Under the artwork on the wall someone scrawled in ballpoint pen 8, 13, 18. The wallpaper itself is faded and yellowed, an off-white color with pearlescent blue tree designs, one in a square and one half out of the square, at regular intervals, like at the intersection of a grid where the lines were removed. These trees are reverse images in that they utilize each other’s negative and positive space.

A short bus ride later, the next day means leaving the Grand Pyongyang Hotel and Jeungup behind, with the city’s apartment towers and streets lined with family-run stores. Fields of early summer rice and other crops extend to tree-covered hills on both sides of the road. This is the bus to Naejangsan, a national park. Getting off the local bus at a small tourist village of restaurants and chain convenience stores, hotels, there was another 2km walk to the actual start of the path. Highlights of the deciduous forested mountains were its main Buddhist chul (temple), Naejangsan, two fishponds, one with a large gazebo, tram to a lookout area.

The building for the cable car has a restaurant and store selling souvenirs and hikers’ paraphernalia. The only hiking socks in stock for summer were black, although several types existed for winter This is a point to ponder while looking at the cable car then searching for 4-leaf clovers in the immense fields of clover nearby under the trees by the road and fishpond with its gazebo.

Of 4-leaf clovers there were an unusually large number. In three meters’ space there are about 30 or more. Granted, some of them are 5-leaf clovers. Indeed, this could be a different species than in the West, but all things considered, it is a lucky day. 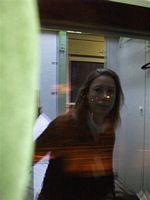 Bounced from the border on the way into Russia