Ours is a tale of four friends, big appetites and a bit of gear, touring in a small automobile in the last days of autumn 2010. Well organized, we were off to experience the best of Romania beginning with the Tranfagarasan Road (dubbed the TF). Regarded by many as “The best road in the world,” we found Romania’s TF pocked and potholed but yet easily one of the most dramatic roadways in Europe. Sporting Arefu’s castle, the glacier Balea Lake, viaducts & tunnels, the narrow two lane route twisted and turned 90 km through the tallest sections of the Carpathian Mountains. Just three months out of the year the TF is open and due to few other travelers it became obvious we were amongst the last of the season. We were enthralled with the scenery but our attention fixed on the dashboard thermometer signaling an alarming fall of mercury, conditions deteriorated rapidly. Moving up, up and up, the white weather on snowy peaks dropped to envelope us as we made our way over the range into Transylvania. Lack of vision provokes its own set of emotions but it was the combination of precipices and a road reduced to a tight sinuous track by high winds, snow and hail that prompted our hearts to pound. In a cocoon, we could see neither high nor low but solely focused on the slick hairpin turns in front of us. In our silence one unspoken thought guided us upward, “Just peak and drop, just peak and drop into Transylvania.” Once at the summit we scrambled out of the car laughing, taking photos and eating falling flakes. Throwing off tension and throwing snow balls we knew we’d be alright on the way down. Exhilarated we got back in and began the descent.

We were en route north to see a cluster of Painted Orthodox Monasteries which are designated as a UNESCO World Heritage site because of highly stylized mural paintings that for centuries have adorned the exterior walls of the buildings. Also in this region are the Wooden Churches of Maramures, which are unique examples of combined Gothic style and traditional timber construction. They’re an incredible sight, monasteries and churches all! We loved the countryside, the horse drawn wagons, the farming people and the extraordinary natural foods prepared with an attitude that fresh ingredients are the cornerstone of every kitchen. Nothing frozen, microwaved or pre-packaged would do. It’s a huge commitment to quality, but surely this is the best approach when coaxing flavors out of unprocessed foodstuffs. In Northern Romania at Hilde’s Residence, even the chicken soup requires 24 hours’ notice and a minimum of four orders. Seems they kill a hen and hand-make the noodles for each order taken. The exceptional flavor went a long way to moderate our guilt for having played a part in “Chicken-cide.”

Continuing on we were fortunate to perfectly hit Mushroom Season. All along the wooded roadsides, vendors offered what they had foraged that morning. We bought a large amount to be cooked at our next B&B, only to be told the variety was very strong and best for pickling. We made a gift of them to the cook who rewarded our generosity with bowls of her own Mushroom Soup and fresh baked hunks of Country Bread. With our spirits lifted, we asked for more and received it! All too tasty to be shy!

Next day after hours of early driving we needed to stretch. We pulled over at the appealingly named “Happy Fish” which was tucked in a tall stand of trees. Inspiration for the name became clear upon seeing the restaurant was built on pilings over fish farming ponds, each chock full of a different size baby trout. Mounting the stairs, we looked with surprise onto schools swimming under the entire eatery and beyond. Inside we were greeted by tables of rough-hewn hunters who were having beer. But being late morning, we turned a blind eye to the local pilsner and the varied fish plates and opted for crepe-like pancakes slathered in homemade currant jam and powdered with sugar. Punctuated by strong coffee this was a rest long to be cherished. Later armed with the best detailed map available we barreled through rustic villages beside the River Tisa on the border with the Ukraine. In just a few kilometers, the paved road reduced to a mucky track between cornfields which rendered us red faced & holding a map that hadn’t indicated that when it rains it’s a no go! Shortly thereafter we encountered a family group of four generations, all women and who had seen our debacle. They put us back on track (some spoke English) and telling jokes at our expense they laughed with us and shared their Grappa. Gifting us a bottle they waved and kissed us goodbye.

Traveling in a country with a three thousand year history of wine making heightened our curiosity and desire to sip the local production. Now according to legend, Plato acknowledged Thrace’s vineyards (present day Romania) as being the finest in the world. At the very same time, Dionysus was the god most revered there. And being the divine task of Dionysus was to bring an end to cares, worry and woe; I think his mission has found good expression in Alba Iulia. The Alba Iulia vineyard, surrounded by mountains, makes good use of a cool climate to produce fruity white wines. The vineyard has been active since the 1st century BC and the ancient catacombs traditionally utilized for keeping wine are still in use today and are open for wine tasting tours. Personally I found the wines crisp and easy to enjoy. Any light menu would readily be enhanced by their inclusion. The medieval city of Brasov bubbles with energy. And there we experienced two great gifts of kindness the very first day. Upon entering the city we were swept up in traffic running swiftly through beautiful avenues. It was simply effortless to be disoriented while driving, consulting a map and reading street signs simultaneously. Overwhelmed, we parked next to a family where upon asking directions the husband abandoned his brood with mama & grandpa to drive us to the front door of our hotel. Later being famished and having little local currency (our cards hadn’t worked well there), the hotel receptionist Alex jumped into a taxi swooping us off to his bank, used his personal account to exchange our dollars for Romanian New Lei and then suggested a tremendous restaurant, as well! Above and beyond the call of duty? Yes, but that’s the attitude of present day Brasov. It’s odd to think that in 1989, this is the city that began the country’s overthrow of communism by mass revolt. In those difficult days others could have been embittered but never Brasov. Here you’ll find the triumphant spirit I enjoy in people and when you visit you’ll find it exciting too. I anticipate that the future holds good things for this city.

From Bucharest back to Bucharest in seven days, I sit early morning in the Airport Angelo Hotel. The light filters gray through the window as I watch sheep and cows heading out to graze, while cocks crow and first flights rise off to points unknown. A Romanian folk saying often used to express perfect fulfillment comes to me, “Ate well, drank well, in the morning woke up dead.” Truth be told, having traveled a large circle, eating, drinking and laughing our way through the countryside of Romania, we honestly thought we’d died and gone to heaven.

Shanghai’s World Expo: a vision for the future? 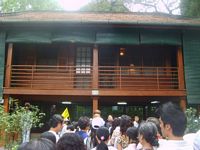 Adopted by Hanoi on a visit to Uncle Ho