“If you can imagine that these thick grey clouds aren’t here, the view is truly AMAZING!” I eagerly assured my parents, as we shivered through our lunch break in the fog enshrouding Nelson Ridge en route to the summit of Mt Aix in Washington state’s Cascade Mountains. Mom gave me that look that I knew too well. It said “I’m cold and wet and I don’t fully believe you.”

I draped the spare jacket I’d carried just for this moment over her shoulders and thought back to my first trip to Mt Aix. As an overly energetic sixteen-year-old, desperate for a taste of the rich adventures in the mountaineering travel books that graced my Dad’s bookshelves, I signed myself up for the eastern Washington hiking club that made frequent trips to the central Cascades as well Washington’s lesser-known but equally dramatic shrub-steppe deserts and basalt coulees in the rain shadow of the mountains. Although it’s not part of one of Washington’s famous national parks like Mt Rainier or the Olympics, Mt Aix and its surroundings are just as stunning. Secretly nestled away in the William O Douglass Wilderness, a 166,000 acre area that shares a boundary with Mt Rainier National Park, is protected under the Wilderness Act of 1964, and is barely a three hours’ drive from Seattle including the long stretch on rocky dirt forest roads that’s best accomplished in four-wheel drive, Aix gets all of the views and none of the tourist crowds.

One gorgeous July day, George Hunt led a trip to the 8000-ft summit which provided a pedestal from which to view the most beautiful peaks in Washington: St Helens, Adams, Rainier, the Stuart Range, and the Goat Rocks wilderness. I loved spending the night in one of many free camp sites that dotted the back roads; the physical challenge of the long steep hike through vanilla-scented mossy trees (Douglass fir, I believe); the shrieks of pikas as the fuzzy rabbit-relatives darted amongst the rocks; and the in-your-face experience of wandering out of the trees onto sunny Nelson Ridge with the grey summit of Aix looming ahead. The rocky scramble posed a new challenge, but confident coaching from George coaxed me to the summit. Several years and a move to Connecticut later, I dashed up Mt Aix for a cheeky weekend’s trip away from my summer job. The outdoor culture of Washington – fashion statements marked by blue jeans and hiking boots, bicycle or kayak racks on every Subaru Outback, and place names like Cougar Lake and Rainbow Falls – contrasted the bustling, concrete east coast. After the same thrill and another day of snow-capped views captured my imagination, I realised that I’d be chasing snowy summits for the rest of my life. And perhaps the equivalent of that special bowl of home-made ice cream at Whistlin’ Jack’s café on the way back to civilisation, a Cascade mountains trademark.

Summer after summer, my Dad kept saying he wanted to see this summit too. He’d spent his share of time hiking and scrambling in the uniquely arid forests on the east side of the Cascades, so it would be an easy trip for him. I spent the next years flirting with the world of ropes, rock, snow, and ice at the expense of my mother’s nerves. So a trip home last September with my boyfriend seemed like the right time to introduce my parents to my first love in the alpine world.

I didn’t want to exclude my height-fearing Mom from the fun, so suggested she might join us for the day. If she didn’t like the exposure once we got above treeline, she and I could walk back down to wander in the Gifford Pinchot National Forest, or perhaps along the nearby Pacific Crest Trail which goes all the way from Canada to Mexico and criss-crosses the William O Douglass Wilderness, while the boys continued on. The evening before the climb, Dad pulled me aside and asked “do you really think this is a good idea?” I surveyed the situation—Mom nervously packing emergency gear that I scoffed at; Iain wearing a jumper that would get soaked and cold at the first hint of rain; and a weather forecast that was less than ideal.

“Nope, definitely not, but we’re going to have a good day out,” I said confidently.

Six o’clock the next morning saw me snoozing in the back of the car as Dad drove the Subaru down Highway 12 to the trail head near White Pass. In contrast to the European Alps which are easily accessible by public transportation, a car is really necessary for getting into Washington’s backcountry. The slightly overcast sky provided a cool morning as we started the hike and everyone was in good spirits. Mom kept smiling the entire way up the trail, and I was childishly excited to be back in the land of high alpine lakes and forest that still smelled of the same vanilla pines. By the time we reached Nelson Ridge, any hopes of the view that I loved so well were fading, but there was no reason not to continue. Mom was clearly getting tired, and as Iain scouted out a sheltered spot for lunch, we assessed what to do. To my pleasant surprise, Mom was enjoying herself and decided to stroll down by herself whilst the three of us continued to the top!

Dismissing Dad’s mumblings about uncertainty finding the path if the weather got worse, I confidently led the way into the frigid greyscale outline of cliffs and glacial bowls, happy to be there even without the views. Typical Washington mountain weather! When it’s sunny there’s nothing better; when it’s not sunny there’s nothing better than a Goretex shell and mittens.

Stories of Dad’s youthful mountaineering adventures leaked out, and it’s probably just as well that Mom was safely on her way back to the car for those. As is usually the case when I’m out in the hills with my Dad, his wide knowledge of location specific sub-alpine birds and plants secretly impressed me. As we crept up above the trees, he pointed out the pink finch, alpine herb, and especially the bendy pine, a waist-high evergreen whose limbs have evolved to be flexible elastic appendages that won’t break under the weight of heavy snowfall.

Finally, we reached the base of the scramble to the summit. I bounded up the first bit, pointing out good handholds to Iain and Dad, making sure to keep them in sight as they followed my lead.

“Isn’t this fabulous rock?!” I shouted down, delighting in the sticky black volcanic chunks. Just a little bit more until the top, then we topped out and I eagerly asked my Dad how he liked it. “Well, I’m glad that scrambling is done, but it’s great to be up here!” Cameras came out, and we upheld the Washington mountaineers’ tradition of signing a notepad kept in a waterproof plastic tube stashed underneath a rock at the summit. Although the clouds only cleared very briefly to give a view of the hills rolling away to arid lands in eastern Washington, I insisted that we stood in the presence of a panorama more stunning than any work of art. And I’d like to think that the others believed me.

After a slow descent back into the forest where a hint of autumn tinged the late afternoon aspens, we found my Mom reading a book and enjoying the peacefulness of a day in the hills. The smiles on both my parents’ faces after sharing my childhood-favourite mountaintop with them provided just as much satisfaction as any technical climb that I’ve ever accomplished. 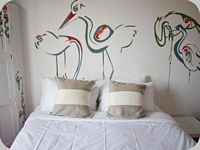 At home in Brighton’s art hotel 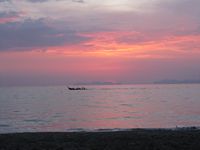 Cooling down on Koh Jum