At first I wasn’t too bothered about visiting Germany it had never appealed to me before, my initial reason for the trip was to see a friend who was from Oldenburg and another friend from Stuttgart was meeting us there. I’m glad to say I was wrong, going to Germany was a massive highlight of 2010 and I saw just how beautiful and diverse the country is which some people forget about.

We bought some cheap tickets and on the 4th September we landed at Bremen airport at 1 PM the flight only took an hour. At the airport and all over Bremen is the animal statue Die Bremer Stadtmuiskanten (the town musicians of Bremen). This represents the folk-tale recorded by the Brothers Grimm, the tale is rather ironic because the characters don’t even make it to Bremen. The weather was comfortable at 12 degrees, in the summer the top temperature in Bremen and Oldenburg is 25 degrees. Now I was in Germany I didn’t know what to expect. Our friend met us outside the airport and she drove us to Oldenburg. It was about 25 miles from Bremen(40.23 Kilometres) but there wasn’t much traffic. Seeing Vehicles driving on the right hand side of the road can be quite strange at first but as I and my British friends were informed most European counties and America do the same. That night we went to a German house party, it was quite daunting at first as I didn’t know anyone and neither did my friends who I had travelled with. As a normal tourist you wouldn’t get an experience like that, the students at the party were eager to hear about my culture and I was to hear about theirs. Everyone at the party spoke English, we got told that most people in Germany speak English, it’s considered “cool” to speak the language. Oldenburg is what I would consider “Real” Germany, it not a tourist part of the country. Oldenburg is a “normal” German city where the locals go about their everyday business. This makes the city even more appealing and interesting to explore. One of the first things you will notice is the lack of cars, the mode of transport that is mainly used is the bicycle. There are numerous designated paths for bicycles in the city, the cyclists have priority, if pedestrians are walking in front of a cyclist, he or she will ring a bell on their bicycle indicating that they want you to move for them. This may seem a little rude at first until you get use to the local customs. Using a bicycle is so popular that there are places where you can rent one from if you haven’t got one of your own. The main shopping area is pedestrianised and bicycles are prohibited, they have to be chained in one of the many bike racks in the surrounding streets. Oldenburg is full of stunning parks but one of the most famous parks in the city is Schlossgarten (The Castle Garden). The park is based upon the style of an English landscape garden. The Rhododendron garden in the castle of Oldenburg is one of the oldest in Germany. Many of the trees being preserved are from the 1800’s and you can see a lot of them by looking across the lake. Another attraction in Oldenburg is the (Landesmuseum Natur und Mensch) it’s the state museum of Nature and man. There are many new weird and wonderful things to see as well as the old. The cost for entry for adults is 5 Euros, Concession rate 3 Euros and family 8 Euros. The museum stays open till 5PM apart from Mondays because it’s closed.

Oldenburg is in lower Saxony, this borders on the North sea. This means that Amsterdam isn’t too far away. It’s only 149 miles from Oldenburg (239.74 Kilometres) There are plenty of beaches near the city too if you want a change of scenery.

Hamburg is the second biggest city in Germany, and when you look around you can definitely feel the vibe. To get to Hamburg from Oldenburg you will have to get two trains. The first train you need to get is the train to Bremen. When in Bremen you need to get on another train to Hamburg this should take just over an hour. Hamburg is a tourist hotspot, people from all over the world come to see the sights of the city and there is many attractions you must see.

1. St Michaelis church is an extremely tall building and is the largest church in Hamburg. You can go to the top of the church and see a unique view of the city and the port from 106 meters above the Elbe. The price for the tower tour admission is 3,50 Euros for adults and for children under 12 2,50. 2. The Warehouse Complex is the oldest complex in the world. The warehouse is a century old and it’s still in use for storing exotic goods from around the world.

3. The Museum of Hamburg history gives a detailed description of the city from 8th to the 20th Centuries. The museum has three floors. The permanent collection that is displayed are: paintings and graphic art, crafts, culture, history, fishing and shipping.

4. Blankenese, the Elbe hillside use to be a fishing village favoured by retired sea captains.

5. The Reeperbahn is the red light district to the east of the city. There is a restricted street where only men aged 18 or over can enter, women will be turned away at the gates. It’s also home to a sex museum and only people over 16 can enter. 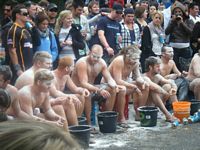