Although certain cities in India may be deemed ‘expensive’ by some people’s standards, the bulk of the subcontinent is exceedingly cheap. Furthermore, certain areas of the most expensive conurbations have their value-for-money quirks. Take the ancient Colaba district of South Mumbai, for instance. While Mumbai at large is liable to drain a backpacker’s budget within a very short period of time, Colaba seeks to aid those on tight budgets by offering a broad range of accommodation and grazing options.

Rising tall and proud behind the iconic Gateway of India, ‘The Taj Mahal Hotel’ is by far and away the most breathtaking hotel in the area, but even its cheapest room threatens to send most potential ‘residents’ running for ‘The Salvation Army’ just around the corner. For fresh-off-the-plane newbies to the city, ‘The Salvation Army’ guesthouse cannot be faulted in terms of its pricing structure. For those unperturbed by the thought of roughing-it amongst like-minded individuals, a dormitory bed can and should be snapped up for in the region of just two-hundred and twenty-five rupees. A double room, meanwhile, shouldn’t set you back much more than seven-hundred rupees.

In the wake of a paranoia-inducing taxi ride to Colaba on the darkest side of midnight, I booked into ‘The Salvation Army’ without hesitation, hollering through the shuttered entrance to the guy who was snoozing on reception. Despite feeling guilty for waking him up, I was glad to be rewarded with a bed. Shame I had to trudge up to the third floor, before negotiating a debris-flooded corridor which shouldered the room I’d been assigned. Out of respect for those backpackers already asleep, I crept into the room with silent stealth, only to trip over a backpack and fall into bed with a guy who really didn’t appreciate my accidental wake-up call. Above him, my upper bunk awaited. Consisting of nothing more than a spinally challenging mattress, there was no pillow or sheet in sight. I had to make do, so I slid my backpack into the nearest corner before hoisting my weary body up and into a woefully uncomfortable state of repose. Breathing a deep sigh of relief, only now could I appreciate the fact that I’d arrived in the most cosmopolitan city in India. Moreover, I was safe.

Breakfast greeted me with multiple surprises. Expecting a mouthwatering tray of myriad curries to be thrust in my direction, I hastened to display utmost gratitude for the plate of bread I was handed through the service hatch in the so-called dining hall. The mere thought of succumbing to ‘Delhi Belly’ on my first day in India was enough to make me hesitant. The three slices of bread were tempting, but the sliver of accompanying butter sent a subtle shiver of trepidation through me. Complementing such carbs, a banana and an egg both dared me to pick them up and gulp them down. Having no rupees with which to buy food anywhere else, I realised that to shun such sustenance would be foolish, hence why I found a seat and devoured everything I had to hand.

I finally hit the streets of Mumbai at ten in the morning. Given that it’s a city spread over seven islands, I wasn’t sure where to begin my forays on foot, so I kowtowed to logic by heading straight for the waterfront, and The Gateway, through which the last British troops left when India celebrated its independence.

The act of seeking shelter and shade beneath its heaven-bound arch proved to be frustratingly difficult. Not only did an army of touts stall my progress, but an intimidating wall of military personnel also sought to stop me from standing where I wanted to set foot. I soon learnt that such personnel were preparing for Barack Obama’s historic visit to Mumbai later in the week. Extricating myself from the area around The Gateway, I ventured deeper into Colaba, uncharacteristically stumbling upon ‘Leopold’s Cafe’ in due course. One of the oldest and most popular haunts for backpackers who are perhaps wary of sampling food and drink from the barrage of stalls which flank Colaba Causeway, the joint’s homely vibes are legendary. While it’s certainly not the cheapest place to indulge (in fact, it is probably the most expensive place in all of Colaba to eat, drink and be merry), Leopold’s is most definitely a fabulous place to meet fellow travellers. The only reason I ducked inside boiled down to the burning fact that I needed to escape the heat. I flicked open my copy of ‘The Celestine Prophecy’ and ordered a chicken omelette in tandem. In the past, I’d never been renowned for my ability to multi-task, but India had already forced me to focus on the bare necessities if nothing else. Thirty minutes later, I was out of there, heading straight for the nearest vendor of fresh sugar cane juice. It’s impossible not to notice the huge number of roadside stands on street corners which come complete with a crushing device so devastating that to trap one’s hand in the mechanism could give rise to a scream so piercing that it might be heard way over on Chowpatty Beach. At first, I thought the guys running such stands were in the throes of furiously liquidising bamboo. Questioning my own assumption, I asked a passer-by if it really was bamboo that was being crushed. ‘No… it is sugar cane,’ vollied the no-nonsense, time-saving response. And for just ten rupees, I promptly got to grips with the scandalously sweet elixir. A further twenty minutes and three glasses down the line, I was hopelessly addicted to the juice to the extent that I couldn’t resist stopping at every stand I passed, sheepishly handing over a ten-rupee note to each individual vendor.

However, my addiction to sugar cane juice proved to be nothing more than a fad. Once I reached CST, the biggest and busiest railway station in Mumbai, my attention was deflected towards the cheap tea and coffee available within its built-to-last walls. For five rupees, a scolding hot punnet of Nescafe hit my throat where it hurt. For one rupee less, I was able to swish a few mouthfuls of Nestea down the hatch.

As diligently as I tried to save money in Mumbai, I wound up spending far more than anticipated simply because everything seemed to be so cheap. A sucker for sampling local culinary delights, I became progressively more daring when it came to sampling street food.

I dubbed the day ‘a miracle.’ Twelve hours in, and I’d never felt better. Jet-lag still hadn’t caught up with me, and my digestive system was thankfully being responsive in a wholly positive manner. 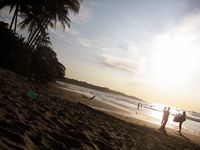 When America could have become.. Russian?