Cruising across the land of the midnight sun, drinking strong coffee and listening to bad dance mixes from a CD found in the glove box. In a kind of semi insomnic daze. The journey is far from over, and is a long way since it began. Stepping out into the ever present pre dawn that lasts from around midnight until 2:30am. An orange line hugging the horizon, the street lights rendered useless as the darkness never stands a chance. Loading the van and hitting the road after little more than an hours sleep. The Sun rising high enough by 3:30am to say it is full daylight.. Deer and wild boar visible in the fields that break up large stretches of forest. A kamikaze pigeon that flew into the drivers side window. Its feathers leaving a greasy smear where it struck.

Rocks, lakes and trees fly past on the E4 motorway at 150km per hour, a high speed cross country sight seeing extravaganza. All the while the brain is numb from lack of sleep and a weekend of excess. A little bit of everything crammed into a few days. Camping by the lakes and drinking cheap beer from Finland, fishing and putting the world to rights through to the small hours. A traditional midsummer festival in the castle grounds of Tyresö Slot, drinking Fernando Vat 19 rum and throwing a Frisbee with some more than merry Swedes in the noon sun before jumping the train into Stockholm, the capital and getting messy in Pub Anchor, a seedy rock bar on Sveavägen, in what turned into an all-night drink-a-thon.

Once suitably recovered some adventuring was the order of the day; Just east of Tyresö which lies about 20km from Stockholm, is the perfect place; just off a little back road called Noretvägen is a little outdoor enthusiasts paradise, swimming in the clear and freezing waters of the sea and climbing the cliffs shaped by ancient glaciers with plenty of bolted routes and opportunities for the trad-climbers among us. Exploring some nearby Klövbergsgrottan cave, enjoying the thrill of trying to crawl through a gap that looks impossibly small, twisting and turning your way through. Inhaling the deep, damp earthly smell of rock and finally appreciating the first kiss of sunlight after a time entombed in the rock..

Back to the journey; the mindless repetitive rhythms of the stereo; a perfect accompaniment to the current situation. Feeling rather autonomous, the mind is uncluttered by static, we are our own. The world becomes simple, its all taken in a slumbering stride. Heading back to Falkenberg on the West coast. The drone of the engine running on full bore and the hum of the tires adding a resonance to the music. A sympathetic vibration to our cosmic beat.

What distractions – pleasant or otherwise – await us at our destination I can only speculate. Yet as I gaze out across a lake the size of a small ocean that we will be driving past for the next 35 minutes as we approach Jönköping I cant help but feel a sense of freedom, and that despite how insignificant we are in the universe, that we as individuals, are mightier than those far off spinning galaxies, dancing their cosmic ballet that, like our very presence on earth, no one really understands or can fully explain. 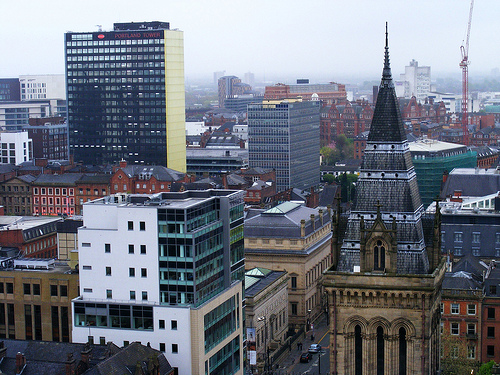 Manchester, England’s ‘Capital of the North’

A heartfelt insight into rural Curaçao