A last minute flight and no plans. Two Brits found ourselves in the stereotype of a regimented city, Zurich. When squeezed by the pressures of work and responsibility that creep with the years it is easy to plan away every spare minute. An opportunity for some spontaneity shifted a weight from the shoulders. Over a day and a night wandering around the sights of this tick-tock town, it grew on me. From the grey, quiet place we first encountered, the sun broke through, the people broke out and scattered themselves on the banks of Lake Zurich. Sunbeams change a city. You see it in London. The clothes get shed, the muscles relax and the smiles come out. Against its rigid reputation I ask anyone to walk along the Zurich lakeside in the early evening of a bright spring day and not be taken by the place. Green banks littered with people kicking back, watching the small white sail-boats skirt amongst the swans.

The town is blessed with a mixture of impressive churches, grand town houses and the odd ginger-bread street juxtaposed with bits of modern monstrosity. I suppose nothing out of the ordinary for a central European city, but, sipping a coffee by the side of its crystal clear river, I noted a distinct lack of stress. Just what I needed.

Or maybe that was the unexpected all-nighter we pulled. Highlights included failing to score a goal against the best table football players I have ever met (an obsessive people the Swiss), being nodded into an unpleasantly up-itself nightclub by some overly stylish ladies we had met on the street, leaving said nightclub and ending up in a thoroughly disgruntled, but welcoming Spanish bar. From the slurred banter it was clear Latin and Germanic culture do not always mix well. These flickering memories pale in comparison to a surreal moment of Alice in Wonderland proportions. Had someone slipped us some potent hallucinogens? No? The beer hall was full of an ageing but energetic “oom-pa-pa” troop dressed as exaggerated Royal Box frequenters of Ascot. Think My Fair Lady on mushrooms. Feathers, top-hats, boas, monocles, the lot. Inane grins intimidated and Dave and I looked at each other confused. Apparently this was a traditional post-Carnival activity. The Swiss are a strange but, certainly in this instance, entertaining people. Tradition has told them to be momentarily off their respective rockers, so, as good, conservative people, that is exactly what they do. And in some style.

Somewhat under par, we jumped on a train to the hills. Where exactly? A place called Braunwald. Neither of us had heard of it before an inhabitant of Zurich had pointed us in its snow-capped direction the day before. Our passage took us along the long, narrow glimmering lake, before skirting off into the rising, narrowing valleys. Before we knew it we were in postcard Alpine territory. Steep fertile valleys cut by cobalt blue glacial streams and sprinkled with wooden houses that combine a twee matchbox quality with necessary hardiness. The particular selling point of Braunwald, apart from the stunning mountain scenery, is that it is car free. Apart from the little John Deer Gator, a miniature fire truck and a diminutive taxi, the nearest thing to an automobile has four legs and goes moo.

On arrival, we made it all of 50 meters to a cafe, dropped the pack, took some much needed refreshment and soaked it all in.

Simply, unashamedly spectacular. Peering down over steep green slopes, far below, to a valley floor scattered with mountain villages and rising up to the crowning glory. Approaching from our right, the valley climbed across the panoramic to a sheer end. Jagged, snow-capped peaks extended across the far side of the valley and cupped around its demise, increasing in their precipitous nature as they neared our very own piece of connected rock. Confused with the dullness of sod all sleep, a headache and non-diminishing elation, we sat for what felt like hours. To top off the scene, a herd of cow-bell clanging mountain bovines munched their way past. The following day was spent trekking a circuit up and around the mountainside. The views only got better. As we traversed up the hillside we crossed fields carpeted with wild flowers. We had lucked out. The same breaking of the weather on our first day in Zurich had broken the winter hold. The snow had within a day been banished to the peaks and spring bloomed in yellow, blue and red.

The inclined fields sloped up to sheer cliff, cutting up to the last of the forest. The water newly freed from the clutch of winter crashed over these precipitous walls in a multiple of cascades.

Passing, or more frequently being passed, by troops of healthy Swiss, we eventually broke off the main path to touch the snowline. A couple of kilometres high, the predominant flowers were now white crocuses. To my delight, an illusive marmot showed himself. Again, we sat and savoured.

Via a dodgy ice-strewn tunnel we broke out onto the other side of the mountain. A fresh, different panorama, leading down to an alpine lake. Perspective was rammed home when, on commenting to a Swiss how special this place was, he replied with a moustachioed smile “this is normal in Switzerland”. Lucky, lucky people. We trekked down and back to normality. Refreshed.

Hitch-hiking amongst the peoples of Africa 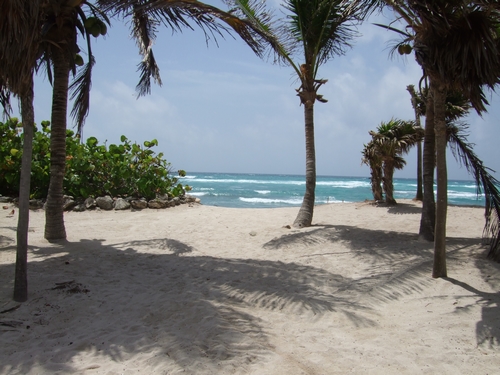 Wet-season Mexico and sunshine on the cheap