“Please take me out of this city before I die.” – My answer to the taxi driver’s question, as he took me to the airport after three nights in A’dam.

The first day begins at a pub near Dam Square. Beth and I are starting a long weekend in a city famous for its artists, architecture, and…I always forget the third thing. We start with Strongbow cider beers and leave, noticing the Euro pub to the left. Heading down Rokin street , winding around the canals (stopping at a smart shop to price hallucinogen mushrooms) we find the coffee shop named Dutch Flowers where we buy a snow cone sized joint, smoke some and order coffees then stop at a small café and have drinks, mini-pizzas, a tuna sandwich, see a person dressed as a super hero, and then take pictures next to a giant painting of the Dutch Masters (the same guys on the boxes of cigars). Around the corner is the Torture museum where we treat ourselves to viewings of “The Chair”, “The Stretcher”, and finally “The Saw” which was used to cut people in half. Next, more sights: narrow house, canals, and a draw bridge. After sights, it’s time for drinks at bars with names like STAGGER and COME IN TOURIST where they only play live DVDs, random clippings hang from the walls, and you take three flights of stairs straight up to the bathroom.

A hard crashing nap is had (we make it back to the hotel for this) and then dinner at a restaurant next to the Euro Pub (cheeseburgers all around) and then it’s off to the Red Light district. First stop is Baba’s coffee house, a techno booming joint surrounded by fifty other coffee houses. We smoke, drink space tea, eat muffins, then cross the canal over to “Prostitute” street where the women are naked and staring at us from their windows. At a bar with a Heineken sign we drink Heinekens. Walking again (sort of), we pass Casa Rosa sex shop and then pass the Casa Rosa live sex show and then arrive at the Casa Rosa Theatre where we have tickets to the “show”. Inside we drink a round of Captains, watch live sex (the show is pretty much couple after couple going on stage and having sex), move up three rows, watch a woman smoke a cigarette with her vagina, order another round of Captains, move up three more rows, watch more live sex, and then watch audience members eat a banana from inside one of the porn stars vaginas. Note that a gorilla (may or may not have been an actual gorilla, I was pretty fried at this point) is also on stage jerking off and spraying the audience with water.

Day two begins after a couple hours of shut eye and waking up still hammered. Breakfast is “toasties” and eggs and then a canal ride and then a walk to the Van Gogh museum. On the way a kind toothless gentlemen with a pen gives us directions. After the museum we find ourselves at the Hard Rock café and have multiple Margaritas, learn how the locals get drunk and throw their bikes into the canals, then go to the Internet Café Coffeehouse and smoke while listening to Snoop Dogg (Drop it Like it’s Hot becomes the trip theme song) and then to a random bar where more Margaritas are had. Back to the hotel to shower then walk back to Rembrandt Plein. On the way a stop at McDonalds to order a couple Royale with Cheeses; however, the man cashier doesn’t understand even when I yell our order. We eat quarter pounders with cheese and then go to a coffee shop that advertises Internet and drink, smoke, and drink some more. Beginning to visibly stumble we approach Dan Murphy’s, a pub, and drink Strongbows and B52’s, and more Strongbows.

Pirates is the next place and it’s dead when we arrive so we order white wines for the ladies, Stongbow for the men and enjoy the bar as it fills up. What appears to be a gay bartender with a surfer wig is serving us and after much discussion (and watching him rip his hair off) we decide it’s a wig, but that he’s definitely gay. Kamikaze’s are ordered and so are more white wines, dancing, followed by many more Kamikaze’s, more dancing, and shots of Jack Daniels. We are invited to come back in an hour, but instead get in a taxi and go back to Dam Square where we smoke next to the monument. Back at Euro Pub we drink beers, dance, drink Captains, do more shots of Kamikaze, drink Margaritas, dance more, more beer, and then a round of Tequila shots. The run of Dan Murphy’s, Pirates, and then Euro Pub in one night has never personally been topped since.

Day three, a.k.a. “Last day” begins with a torturous (saw like) hangover and Burger King cheeseburgers followed by a walk up Damrak past a mime to the Sex Museum where there is a flasher saying “Hey” and “Psst” as you walk through. Moving West we find Pink Point/Homo Monument and then a café where drinks and coffees are served as you look across the street at the monument.

Over at the Cannabis College we learn that anything can be made out of hemp. “The wall behind you, that’s hemp!” They told us. Downstairs in the garden under the glow of heavenly lights is a little slice of paradise. So much pot, just feet away. Lying down, in the middle of the plants looked like the perfect place for a nap. Leaving, we realize it’s almost two o’clock so we go to “The Other Side” coffee shop, buy a joint, smoke, and then go find a bar and have a round of drinks, followed by another round of drinks, then we go to the floating flower market to buy souvenirs (to have something like wooden tulips and plastic Van Gogh ears and not just a hangover to bring back) followed by a trip back to the hotel, shopping (hear J-Lo’s new song-the one with the trumpets-three times), Beth buys boots, and then it’s back over to Rembrandt Plein to start the final night with two bottles of wine at an Italian restaurant. Because when you think Holland, you think Italian.

After, back to the Internet Café coffee shop for more Snoop Dogg, more wine, more smoking giant joints, a new dance called simply “The X”, another giant joint from pot called The Black Widow, a poor display of pinball, and a discussion revolving around hiking boots with red shoe laces.

A brief visit to the Black & White and then Stongbows are quickly poured at Dan Murphy’s and then we find our selves at Three Sisters drinking more beer, more wine, and a round of shots.

Across the street is The Bulldog. Inside we smoke, drink tea, smoke some more, and drink water. I wander into some random building where two guys are sitting and yell “You’re Hollywood”, and then take their pictures and then we get on the tram and try to give the driver a “Fifty” (50 Euros) and she is very confused, refusing to move the bus until we come up with change. I blame the last sequence of events on The Black Widow.

Back at the Euro Pub we drink Captain and Cokes, B52’s, glasses of Kamikaze, Strongbow cider beers, and then the girls have blow jobs on the bar. Note that after the blow jobs their breasts were stamped with FAILED INSPECTION, this is important if only because it shows the way Europeans do business. More beers, more shots, an invite to a club named “No Escape”, and then we go to the Red Light District and end up at a bar with a Heineken sign and meet two gay men who give us “mini” matches and after five minutes invite us to stay with them in San Francisco. We drink wine and do shots with the gay men (Kamikaze for us, Jagermeister for them) and then have another round of drinks. Finished with the round we go to a bar next door that has an Amstel sign and have another round, but something is missing so we go back to the bar with the Heineken sign and have two more rounds of drinks.

The next morning in the lobby waiting for our taxi someone enters and I have an urge to run up to them, punch them and scream “Welcome to A’dam bitch”, in part because it would be comical, but mostly because I’ve never been so intoxicated after waking up in my life. Barely able to stand we get a taxi and rush to the car. As we pull away from the hotel the driver asks, “Good morning, how was your stay in Amsterdam?”

David S. Grant is the author of BLOOD: The New Red. For more information go to http://www.silverthought.com/blood/ Follow David on twitter: @david_s_grant 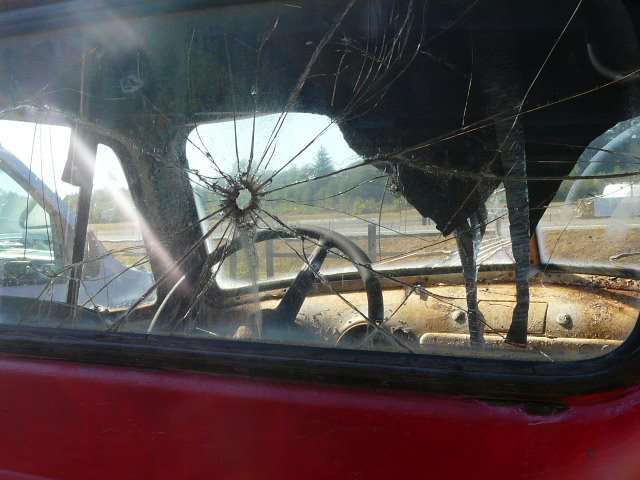 Into the ‘Twilight Zone’ with vampire Ed Cullen