Entering Lourdes in South West France for the first time, I was first struck by the fact that there is as much bric-a-brac as Blackpool, albeit of a religious tone. The desire to mark and remember the pilgrimage, as with any form of travel, has created a mass market for kitsch. Nowhere before have I seen a more concentrated collection of gaudy gimcrackery as in the souvenir shops of Lourdes.

Ever since Our Lady appeared in visions to Bernadette Soubirous in 1858, Lourdes has been a place of pilgrimage and alleged miraculous healings, attracting millions of visitors every year. Nuns, priests, pilgrims and tourists intermingle in the shops and streets. Lourdes has more hotels than any other town or city in France next to Paris. These sheer numbers of visitors have given rise to commercial tourism at its tackiest, in stark contrast to the pious nature of the pilgrimage.

In the main streets shop after shop sells the same plastic Our Lady of Lourdes shaped water containers, glowing, glitter clad Jesus icons, Our Lady in a snowstorm and even ‘I prayed to Our Lady of Lourdes’ dishcloths. The gift shops are repetitive. To stand out from the competition some shops use numerous blue neon light displays more reminiscent of the Las Vegas strip in the 80’s than a centre of worship and spirituality. Bernadette’s visions have been transformed into plastic idols which probably pay as much homage to China as they do to the Catholic Church.

It is not just the shops that reap the rewards of high tourism. The cafes on the high street sell junk food with the careless attitude that comes from easy money to be made by trade passing through. Hurriedly prepared, poor quality meals pump out of the kitchens and I struggled in vain to find any I desired to eat in.

Despite the thousands of modern Euros pouring in to Lourdes, I felt that it is a town left in the past. Perhaps it is the hundreds of old fashioned wheelchairs with their tubular steel and chipped paint pushed by nurses in dated white uniforms, reminding me of postcards of Victorian spa towns. Some of the shop fronts looked like they hadn’t changed since the 1960’s.

In contrast, the grand basilica feels almost Disney-like with its wide approach, turrets, arches and gold. Behind it, the grotto where the visions were seen is approached by a wide expanse of tarmac and a row of stainless steel taps where pilgrims, chatting on mobile phones, continuously fill plastic bottles with the spring water described to Bernadette in her visions. This area had none of the spiritual feel I was expecting; however, as one draws closer to the grotto, a silence descends giving a strong sense of piety despite the car park feel of the setting.

One could say that the trappings of tourism are not part of the Church itself; however sadly that was proved not to be the case when in 2008, Father Raymond Zembelli, treasurer of Lourdes, was investigated by financial police over misappropriation of donations.

I left Lourdes with mixed feelings created by contrasts and strong beliefs. The tourist information website says “Water, rock and light are the key elements, and are closely linked to the history of the Virgin’s Apparitions to Saint Bernadette” however for me the key elements of Lourdes today are plastic, tarmac and neon. The town felt both hopeful and desperate, exploitative and pious, it displayed extravagance and poverty.

Whatever your views, one can join the hordes and visit Lourdes for religious reasons, as a cultural experience or, quite simply, for the fun of hunting for the tackiest souvenir. Mine was a glowing nun. 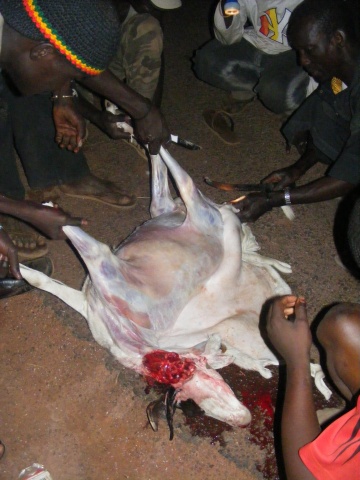 A shared-taxi ride across West Africa

Return of a native for Christmas in Beirut