What inspired me to check out a Muay Thai fight in Thailand for the first time? I read in The Green Book, the manifesto written by Colonel Muammar Gaddafi. The late Libyan leader states that boxing and wrestling is evidence of mankind’s inability to rid itself of savagery. But fighting forms are not about two people beating the living daylights out of each other. The Neanderthal behaviour is more likely to occur from spectators whose adrenalin surges while watching a fight. Contestants are required to undertake rituals, perfect techniques developed over hundreds of years, and ensure they are in peak shape.

When Muay Thai combatants are in full flight, they are as graceful in applying their knowledge and training outside of the ring as they are brutal in administering punishment upon their opponent. But respecting tradition always comes first before any battle. Before the match’s commencement, fighters place their palms together in front of their face and perform a wai, bowing to all four corners of the ring. Traditional music plays throughout the fight, driving the fighters to engage in a battle of wits, athleticism, and physical and mental strength to determine who will be victorious.

I wanted to take in the authentic atmosphere of seeing Muay Thai live – the sights, the sounds, and if necessary, the smells. This is why I handed over 400 Baht (USD $10) at Chiang Mai’s Tapae Gate Stadium. At least that is what I thought my ticket would entitle me to – the local experience.

I arrived half an hour early, giving me the chance to look around and soak in the atmosphere of visitors mixing with locals. When I saw that the only available seats were next to fat, dribbling men slapping the bottom of anybody looking like a female, or guys in their late teens and 20s engaging in a race for who could drink the most alcohol in the quickest time, I cursed myself for not attending something less intense, like a Thai cookery class. The venue resembled a seedy strip club, minus the exotic dancers.

At 8.30pm, a voice announced over a crackly amplifier that the opening contest for the event was ready to begin. I reached into my pocket and unfolded the pamphlet. The first bout was in the 45kg group. My first assumption was that two teenage boys would be competing against each other, but I was shocked when two small boys were led to the ring by their trainers. The children did not look more than 12 years old, and that was being optimistic. Both fighters kept their eyes fixed to the floor; they must have felt uncomfortable to have been part of a circus act, watched over by drunken spectators. A male dressed in a pink-floral shirt wandered up to me, pointed to his trousers and asked “Who you like, pink or yellow?”, referring to the fighters’ trunk colours. Gambling has never interested me, so I had no problem in turning the other way. But I must have been in the minority, as plenty of men were ready to bet on the outcome of the fight.

In placing all my attention on what was happening outside of the ring, I forgot that the formalities had taken place and the fight was now underway. Neither boy initially committed to draw themselves into apposition to be struck or kicked, doing their best not to fight. This agitated a small section of the crowd, who made their displeasure known by booing. They paid 400 Baht and expected to view a battle of two individuals with killer instincts, not two brave kids willing to risk injury and show off their skills. Eventually the verbal abuse started. “I WANT TO SEE BLOOD!”, yelled out one pot-bellied foreigner, impatient at not having seen one knockdown in the first 60 seconds. Another shouted out, “SOMEONE MUST DIE IN THAT RING TONIGHT!”. It would not be long before crowd members started fighting with each other to determine who shout out the worst line. Where was the beautiful art that I had paid to see? It had degenerating into an exhibition of savagery, just like Colonel Gaddafi had warned.

So this is all I would take away; the musings of a madman. And a handful of foreigners were to blame.

I needed something else to take my attention away, anything would do. So I signalled to a kratoi (ladyboy) who was heading towards the bar.

“They are eight or nine years old,” she responded. I gasped in disgust. To her this sounded like a routine question that every ‘concerned’ foreigner would come up with, so she answered in the best way possible; matter-of-factly. All she wanted to know was my drink order. That would have got a reaction, possibly a smile. But I continued to ask questions.

“Where do the children come from to fight here?”, I asked, as the crowd cheered when the referee stopped the fight at the end of the round.

“Most come from the countryside to earn money,” she said. “The prize is $USD30, but none of it goes to the winner.”

“The trainer gets some. So does the stadium owner. The boy’s parents get the rest,” she said. “Now do you want a beer?”

I politely said no, and that was enough as far as the kratoi was concerned. She smiled as if to say ‘Thanks for wasting my time’, before walking off to find a customer more willing to accommodate her needs. Bars are no place for discussing morals with staff because changing the world is not on the drinks menu. The referee declared the winner, the boys were quickly whisked away from the arena, their feats and existence soon to be forgotten by the crowd, and gamblers who bet on the right colour shorts won enough money to continue getting plastered, all in time for the next match-up. The cycle of moronic behavior would corrupt the beautiful art once more.

I wondered if anybody agreed with me, and amazingly, I found an ally at the bar. Since I did not catch his name the first time we introduced ourselves, the name ‘Dean’ stuck in my mind, even though it could have been Edgar or something completely different.

“Awful, isn’t it, mate?” Dean slurred in his Cockney accent, taking a swig of beer and then letting out an enormous belch.

“The service or the surroundings?” I asked, not sure what he was referring to.

“Both. Did you see that last fight?”, he continued. “Watching two kids in a place like this. F—-ng awful. Were the grown men too gutless to show up?”

I nodded in agreement. We began talking about what led us here. It turned out that he, like me, had made feeble attempts to learn Muay Thai as part of being indoctrinated into the “Thai experience”. Neither of us, however, stuck with the grueling regime of dietary and training requirements. “I won’t give up my booze and ciggies because some tough looking guy yells in my face about unhealthy my habits are for the sake of doing sit-ups and practising hits and kicks. I went through all that with my Dad when I was younger.”

Dean’s father was in the military and considered fitness and discipline two essential ingredients in a healthy diet. “When he sprung me drinking and smoking in my teenage years, he dragged me off to a boxing gym to teach me a lesson about taking care of myself,” Dean said. “I followed it for a while, not to make him happy, but so I could be the toughest in my year level. If someone I didn’t like the look of brushed against me, I threatened to belt him. I was addicted to fighting and got into a lot of trouble from the teachers and principal. Every time my Mum picked me up from school after being kicked out, I would get in trouble from Dad. He would blast me for not showing discipline and respect. Yet he was the one who initially lectured me about the importance of defending myself. I couldn’t win.” Shrugging his shoulders, Dean added, “I dropped out of school and started hanging out with the wrong crowd, looking for fights. Being in a street gang, I nearly got my head kicked in, so I left. When I look at people fighting on the streets here to impress, I say bollocks to that. We should not be teaching kids that fighting is the best way to solve problems in life,” Dean said. He paused, downed the contents of his bottled beer, and then continued.

“I have a ten year-old nephew with autism who lives in a rough neighbourhood in London. You know, a council housing estate with lots of crime and violence,” he said. “All he knows is how to love everybody around him. What matters to him is giving hugs and saying ‘please’ and ‘thank you’. The kid is oblivious to hatred. When he gets into high school, he will be easy pickings for bullies. I learned the hard way to stick up for myself and managed. But who is going to protect him? Whatever hell he endures now will impact him for the rest if his life.”

An awkward silence fell over us. I felt obliged to say something, but I could not think of anything in-depth. “I hope he manages to get through,” was I all could utter. It sounded insincere and unintelligent, as if I wanted to abort the conversation. But that is not what I meant to convey. Not that it mattered, as Dean kept talking. “It’s worst for these kids who fight just to keep their families out of poverty. They deserve much more in life, but one day they will make great fighters. That is, if they get there.”

He pointed to an area close to the ring where the most raucous section of the crowd was seated. “It is so easy to look and sound tough from the outside. But put that lot inside the ropes and they will be begging for mercy.” Dean finished his beer, slammed down the bottle and then ordered another. He was one beer away from going up to a stranger and challenging them to a fight, but maybe he was happy somebody would listen to him talk about a sensitive matter. I sensed he wanted to air more grievances, but I did not dare ask.

My encounter with Dean made me glad about turning up. Having withstood the lunatic asylum masquerading as a boxing arena, I felt as if I had extracted aurum de stercore, or gold from dung. Originally published in Primo Levi’s book The Periodic Table, Levi used the phrase when recalling how he sifted through chicken excrement to find a valuable metal while working in a mine in northern Italy during the Second World War. Although I was not quite on my hands and knees, unearthing Dean’s sensitive story was equally as precious. His words were what I remember the most.

There were another five fights for the night, including a tag team event where four participants were blindfolded before taking part in a Muay Thai fight. Towards the night’s end, I had overcome my disappointment of not seeing an authentic Thai boxing bout, for the night was about entertaining spectators and catering to their needs. I had seen traces of courage, but not the spirit of the beautifully crafted warrior movements I had been craving for. Thankfully, nobody outside of the ring developed an insatiable taste for uncontrollable violence, or integrity would have been dealt a knockout blow, and a dictator’s prophecies may have been proven right. 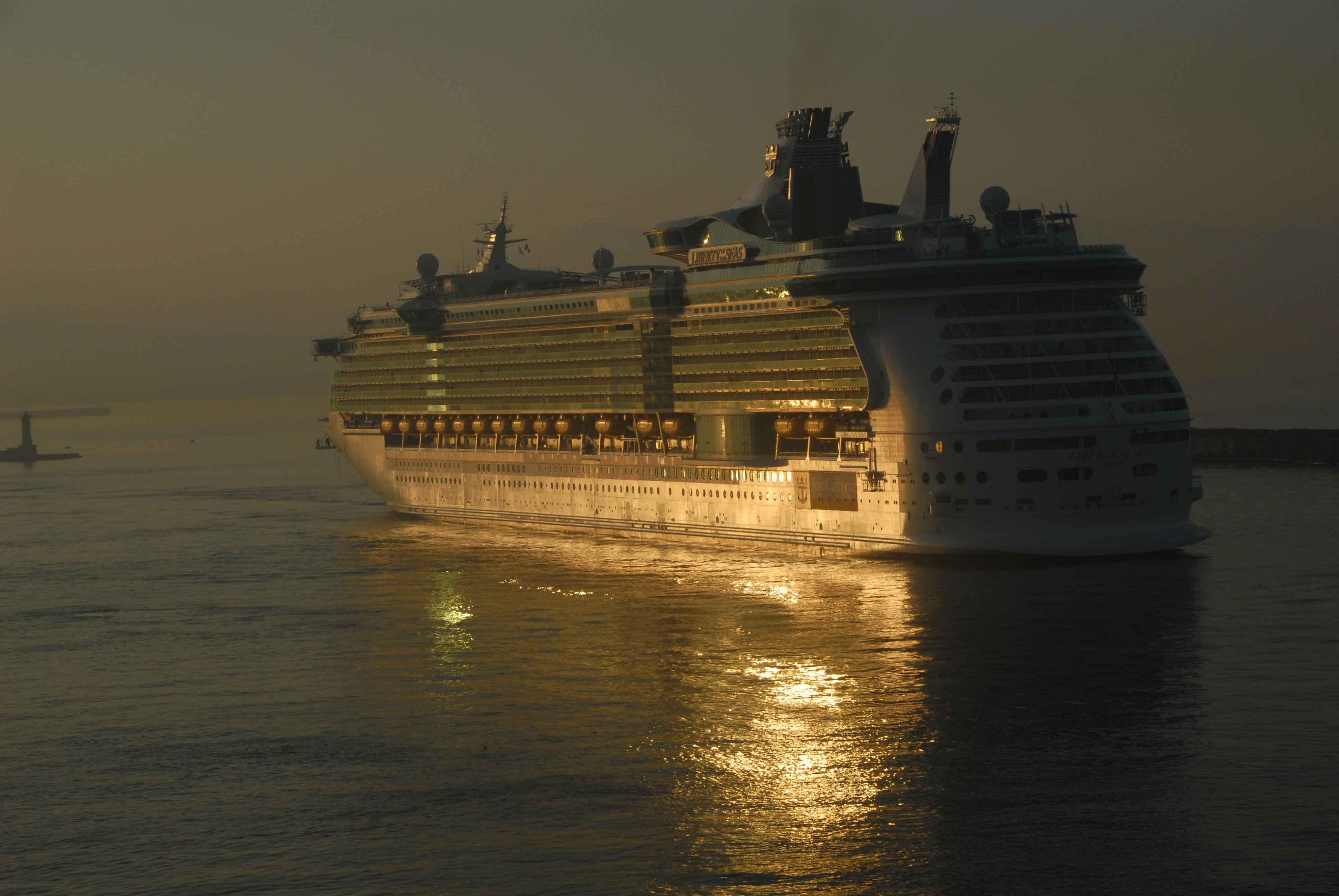 Plenty to moan about on a Caribbean cruise