‘I didn’t think people did their own distilling nowadays,’ I said, and that was the trigger for a flood of moonshining stories.

Making whiskey ran in Haggerd’s family but, as always, Earl led off by recalling his own father being hauled up before the judge by a new town deputy for being drunk in public. The judge fined Pa ten dollars and sent him out of court. An hour later, he was picked up again, even more drunk than before, and back to the courthouse he went. The judge now infuriated the lawman by handing out another ten buck fine and throwing him and his freed prisoner out.

By this time of day the judge was well into his own cups, and as the deputy opened the door, the judge called out to him to quit bothering the court and to let the old man bring him in a couple of bottles. It was well known by everyone in town except, it seemed, the sheriff’s new representative, that the judge kept a supply of moonshine in a gallon jar that was painted white so it looked like milk. Earl’s pa gave the deputy a jaunty ‘good day’ and went home for the bottles. When he returned to the courthouse everyone had left except the judge, who had passed out on the bench.

The next arrival on Haggerd’s porch was his son-in-law, Jim, who continued to work a still up the mountain as part of his own family tradition even though, as he observed, trade had quietened down as living standards had risen across the country. He opened a heavy banjo case and intermittently picked out tunes as the talk rambled around to building the simple apparatus needed for the job.

Haggerd lamented declining standards in the automotive industry. ‘Time was when you could take the radiator out of a ‘Cat’ tractor, clean her out, and set her up in the woods. They was pure copper and they made the dandiest little stills. That’s all gone to hell now, though,’ he sighed, ‘them new radiators is all steel. You can never get all the rust out.’

I asked if people were ever caught in the act of distilling ‘You still need to be careful,’ he sipped his drink, ‘but thirty years ago them revenuers was everywhere. Folks would always set their stills half-way up a hillside. If you heard the revenue men comin’ through the woods you’d have to leave it to get busted up, but they’d never catch you on account of how you’d placed yourself.

‘They’d have to be on foot,’ he explained, ‘because there weren’t no four-track vehicles to get into the woods in them days. By the time they reached you, they’d already climbed a few hundred feet so they were pretty well washed up. You were fresh. So long as you ran uphill, you’d leave them standing.’

Earl had never been a prime mover in the distilling industry, but back in his extreme youth in the 1950s he had been a runner, carrying moonshine down to Georgia and North Carolina in souped-up automobiles. It had been a sort of deadly game, like motor racing with an honest profi t for the winners. These were usually the moonshiners, but there were accidents and occasional convictions as state troopers with massive V-8 motors latched on to them. There were also shoot-outs, sometimes with tragic outcomes. The truth probably was that much of the trade had been far from homely fun, but in Earl’s memory, the whole business had taken on a Robin Hood flavour.

Earl’s favourite car had been a 1940 Ford with a three-speed on the column and a vacuum two-speed axle. This mighty motor was so hepped up that it would pull 125 mph in second gear and Earl knew there wasn’t a patrol man in three states who could catch him. Then a rumour began spreading about a ‘hemi-head’ Mercury with two four-barrel carburettors in the pay of a giant revenue man, but nobody in Earl’s circle had ever seen this rocket ship. ‘Feller who told me about it claimed it burned so much gas that you either had to switch off the engine to fuel up or find a fast pump, because even at idle it was using up the stuff quicker than you could fill that tank.’ One night, Earl had unloaded down in Georgia and was driving home to the hollow through North Carolina. The absence of speed limits in the happy days before the 1970s oil crisis meant that you couldn’t be pulled merely for driving fast, so long as you weren’t killing people. Earl was cruising through the darkness at a modest 100 or so when a pair of headlamps appeared in his mirror.

‘That car come up fast,’ he said, ‘and he drove in so close behind me that I couldn’t see the lights no more ’cause they were under my trunk, just this bright glow. It had to be either a cop or a criminal and either way I didn’t want him, so I booted the Ford on some. At 130 the lights were still under my fender, so I stamped the gas pedal hard down on the fi rewall. We was flat out through them pine woods. That road ran dead straight for fifty miles clear to the state line and I knew I’d out-run him. At 160, when I had no more to give, he just cruised up alongside me an’ turned on his blue light.

‘I stopped and he pulled in ahead of me. Wasn’t nuthin’ else I could do. I didn’t want to end up in the ditch at that speed. I climbed out quick, ’cause you’re always better looking ’em in the eye, and I checked their car. It was the Mercury all right. Fat bulge on the hood an’ it was burble-burbling away on idle, the whole thing sort of shaking like there was a wild animal inside it just waitin’ for the gas pedal to let her out.

‘Well, let me tell y’all, one of the biggest men I ever saw climbed out of that car. The trooper who was drivin’ got out too. He was a sizeable man, but he looked like a little kid alongside this revenue man. That guy weighed three-fifty pounds and then some more and he had tobaccer juice runnin’ down from both sides of his mouth.’

Jim had lit a hurricane lamp and now he passed around the bottle. I had been so engrossed in Earl’s tall story that I didn’t even realise my glass was empty. I poured a stiff slug as Earl continued.

‘The trooper kept me covered while the big guy checked through the car. All the jars had gone of course, but we used to keep a whiskey tank in the trunk. He opened her up an’ she smelled to high heaven, but there wasn’t even a puddle left inside.

‘“Not in this state anyway,” I told him. I thought I’d get a pistol whippin’ at least, but they just steps back an’ the big feller says, “There’s a diner open twenty miles up the road. Seems it’d be the neighbourly thing for me to buy y’all a coffee there, but your ol’ Ford’s so slow the coffee’d be cold by the time you dawdled in to drink her.”

‘It’s three in the morning by this time and it’s midsummer, but it’s still dark. Away goes the Mercury. I heard him burn rubber as he changed into third an’ he must have been doin’ well over 100 by then, but I wasn’t about to let him get away with his mouth. I was still tremblin’, I’ll tell you, but I give the Ford her head and ten minutes later I was walkin’ into the diner. Like the man said, it was twenty miles. They’d bought me a coffee, an’ it wasn’t cold. I drank it and tried to get neighbourly, but they just stared me down, so I cleared out an’ never used that road again.’

‘Quit your jaw, boys. Supper’s on the table.’ Dolly called us through the open front door.

More about this author’s motorbike ride across America in his book. 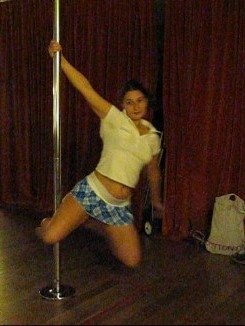 A pole-dancing lesson in not-so-strict Singapore