The morning newspapers brought photographs of the devastation in the delta and a death toll that would multiply each day. Estimations of the fatalities seemed to vary greatly according to source and, as with the war in 1971, the political agenda of the author. The main direct impact on Dhaka itself was the loss of electricity and also a huge chunk of its workforce that had headed south in search of their stricken families. Fortunately for me, I was about to go north.

Mr Razu arrived as agreed to collect his dollars, proudly introduce his chauffeured minibus and explain that the driver would need to stop for fuel shortly after leaving Dhaka. All being well we would be in Srimangal five hours later, he confirmed, but “all being well” is a mighty big expression in the not so developing world. Sure enough it took two hours to get through the madness of the capital and a further two to search for, and wait at, a filling station that was blessed with both petrol and sufficient electricity to power the pumps. And that was the best part of the journey. The road was of normal width for two vehicles, flanked by dusty pedestrian pathways and – as is always the case in poorer countries – packed with people transporting cargo by hand, head, cart and animal. The flat, semi-waterlogged fields stretched as far as the eye could see in all directions though only on the rarest of occasions did my eye, either of them for that matter, stray from the road ahead.

In case you’ve never been there, be warned that the system of driving in Bangladesh is very different from anywhere else in the world. It is so utterly flawed and absolutely terrifying that every second of every journey is dominated almost entirely by thoughts of impending disaster. The crux of the problem is that the driver of an overtaking vehicle transfers the responsibility of death-avoidance to all other motorists upon the sounding of his horn, thus pulling out at high speed in front of an oncoming bus then becomes the bus driver’s headache. Or limb amputation. Or funeral. It’s a philosophy that gives the approaching vehicle a real incentive to brake as hard as possible and, when that doesn’t quite do the trick, swerve through cyclists and pedestrians to create that extra bit of space.

My taxi travelled faster than most other northbound vehicles so I got to see more than a fair share of buses and trucks moving at pace towards my forehead. Not very manly, I know, but I couldn’t prevent the release of a gasp-cum-whimper with each manic manoeuvre, nor could I stop the reverse body thrust – arms and legs fully outstretched – that would extend my life by 0.2 of a second. The frequent sight of crumpled wrecks in the paddyfields, often part submerged, did little to lighten the mood and it was only when darkness had fallen and we swung into the driveway of the Tea Resort that my fists and teeth and buttocks finally became unclenched.

It had probably been the most terrifying afternoon of my life. I felt sick. I felt more exhausted than if I’d crawled from Dhaka on my hands and knees. I felt angry that I had been stupid enough to choose a car instead of letting the train take the strain. I felt cheated that a whole day had been wasted. Yes, I felt pissed right off, as they say in Manchester. (And possibly one or two other places).

A scruffy man led me down a corridor where several million flying insects had gathered around a dangling light bulb. Then he handed me a key and walked away. No wonder. The room was so damp and smelly and utterly disgusting in every detail that I couldn’t even bring myself to sit on the sagging bed with its repulsive floral eiderdown, or touch the shabby motheaten curtains or even look in the bound-to-be-revolting en-suite bathroom. Resort! They actually had the temerity to call this a fucking resort! What a stinking, festering, God-forsaken dump. Alphabet travelling? Bollocks to it.

And then I lay down and fell asleep, the first of my three nights at the Tea Resort. 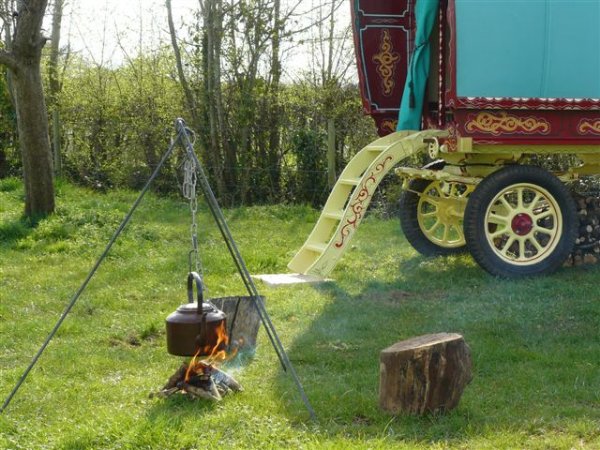 One gypsy caravan and a couple of Somerset ciders