When Pablo Picasso painted his famous Guernica back in 1937, I wonder if he knew what its impact would be. It is a symbol of the tragedy of war and a monument to the universal suffering that conflict brings to all involved. It is a controversial work of art named after a town in the Basque region of Spain which was destroyed in 1937 during the Spanish Civil War. At the moment you can see this masterpiece in the Reina Sofia Museum in Madrid. I was disappointed by its size when we actually saw it a few years ago, but there was no disputing it’s visual impact. Such is its value that the Guggenheim Museum in Bilbao has a space designated to house it when they negotiate its return to the Basque region! You may well be wondering why a story about a place in Navarra would begin with such a history lesson. Well, a small part of the region is experiencing its own tragedy and suffering at the moment. In the foothills of the Pyrenees lies the village of Zilbeti. Nearby is the massive magnesite mine and processing plant. This valuable mineral is prevalant in the hills and Magna have been given permission to destroy part of the forest to create a new open cast mine. That’s a real shame because it’s a beautiful area. It’s also criminal because it’s supposed to be a protected forest!

Now, should this scenario occur in the UK, every Swampy activist and his dog would be camped out in the trees and chained to the branches. The story would be all over the TV and newspapers on a daily basis. Here the story seems to have escaped the public’s attention. Maybe that was the idea! In Zilbeti though, the environmental campaigners have come up with a unique way of bringing this tragedy to the public’s attention – Guernica in the Woods.

We parked up at the end of the road, strangely nestled in amongst the hunters’ jeeps. Their gunshots rang out as we walked along the forest road through an autumnal red sea of fallen leaves. The road twisted and turned as it made its way up towards the top of the hill. We knew we had reached the right place when we saw the beech trees proudly wearing their white ribbons (or bandanas) complete with sponsors’ names. Nearby a small platform gave us a view of this work of environmentally friendly art. 46 trees have been painted with biodegradable paint and from this vantage point, they join together to form an almost perfect replica of Picasso’s Guernica. It was truly incredible.

Walking back down the hill we stopped by the river for lunch. To think that soon this part of the forest could be replaced by the ugliness of an open cast mine is quite terrible. Maybe it can be saved. I certainly hope so. 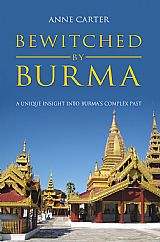 Overland from Burma to Asia – in WWII

Buenos Aires, where the living is easy