This is a strange place. It’s a place where Chicago meets Karachi, where Moscow meets Madrid. It’s a place where the living dead congregate. Blurry eyed, stomachs still circling high above the ground and minds lost somewhere over the ocean. A thousand faces disoriented and tired. Welcome to the transit lounge of Dubai International Airport.

I lost my mind. Some might say I lost it years ago. And they may be right. But, on this particular occasion, I lost it somewhere over the Indian Ocean in an Airbus jet. No doubt It will catch up once the jet lag dissipates in a few days from now. My belly still churns in the turbulent atmosphere some miles above Dubai airport, which we circled around for an eternity because of the heavy traffic landing and taking off.

An early morning take off out of Chennai’s Anna International Airport already ensured one sleepless night. Now stuck inside another airport for the next six hours in what is laughably called ‘transit’, yet going nowhere fast. From Madras to Marrakesh via Dubai and Casablanca with a dozen cups of coffee and countless meals on trays delivered to my seat courtesy of women in the sky with painted on smiles and airline uniforms.

From a world of sambar idli, dosas and rava kesari to a land of olives, tajines and mint tea. From Mint Street in Madras to mint tea in Marrakesh in the blink of an eye. Hardly that fast, but it kind of sounds poetic. And, believe it or not, air travel was once actually quite poetic in a period long before crowded skies and ‘stacking’ and circling high above mega-sized airports became the norm.

In Britain, during the 1970s, there was a TV commercial for a particular airline which zoomed in on the beautiful face of what was called back then an ‘air hostess’ – ‘cabin crew’ in today’s non-sexist parlance. And, as the camera focused on her, she seduced the male viewer with the phrase “I’m Mandy, fly me!” Commercials may not have been as slick as they are today, but what they lacked in slickness, they more than made up for in impact.

Mandy represented all the beauty, poetry and glamour of air travel in the days before air passengers were scanned, scrutinised, questioned, cattle prodded and virtually criminalised for daring to set foot inside an airport terminal. It was an age before paranoia and wars of terror that are deceptively passed off as wars on terror.

Mandy’s smiling face could even be seen looking down on the public from billboards in many a dull concrete-grey British city. Mandy, the air hostess and temptress of the skies, adding a splash of excitement and colour to the drab urban winters of my youth. With her smile as bright as sunshine, she called me through the poster and welcomed me aboard. Where did you go to Mandy?

Even the British rock band 10cc had a huge hit record called “I’m Mandy, fly me.” It was a great song, but given the ad campaign of the time, they were always going to be on a sure fire winner with the title alone.

After countless flights, I’ve yet to meet Mandy. That’s just as well because she’d be in her 60s now. Still beautiful, no doubt, but disappointingly not the youthful heartbreaker I remember from my teenage years. But that was being a teenager in the 1970s for you. Indeed, that was the 1970s for you. It was a much simpler time, an era when the TV viewer might even have thought that the Mandy in the TV commercial really would be waiting to greet them and welcome them aboard their next flight. Life was more uncomplicated. Just three TV channels in Britain, a handful of radio stations, trade unions against business, the US against the USSR, no internet, jobs for life and a certain structure to living and life. It’s all gone.

And somewhere along the line, Mandy and her promises from above went too. As she waved goodbye, we also said farewell to glamour in the skies and on the ground. Airports now resemble giant shopping malls that are cynically laid out in order that the hapless passenger is ‘guided’ through endless pathways to ensure maximum ‘footfall’ for the same big-named stores that are to be found in airports from LA to London and beyond.

These days, that’s how our stairway to heaven (or hell), our pathway to the skies, begins – on a carpeted walkway passing through the perfume department, the duty free section, the travel bag area and any other number of bland shopping zones cynically devised with the right mood music, aromas, lighting and layout to part the air traveller from their cash. Of course, prior to getting this far, we all had to queue in line to check in then line up to be scanned and searched along with our baggage by a bunch of security personnel who must have every ounce of humanity squeezed from them as part of their training, that is if they ever had any in the first place.

And when you do actually manage to board the plane, it’s a hit and miss affair. Will you get the miserable 2013 version of Mandy with a bad attitude and a bad hair day to ‘welcome’ you aboard? The overworked, underpaid Mandy of the European budget airline variety who, unlike her 1960s and 70s chic counterpart, very often no longer yearns to be in the sky doling out pre-packaged rolls and bags of nuts to the masses but down on the ground doing anything – anything but this.

Mandy was an icon from a different age. It was a time before budget airlines. It was a period when air travel was glamorous and beyond those with a tight budget. A time when being an ‘air hostess’ was accorded an almost movie star status, jet-setting around the globe and catering to trendy champagne travellers with cash – lots of it – and who probably were movie stars. These days, air travel has all the mystique of an airport transit lounge on a dull day in November. It’s for good reason that economy class has become synonymous with the term ‘cattle class’.

Can it really be this bad, though? Not really. High in the sky, I do occasionally still catch a glimpse of a smile, a greeting, an attitude and a face that takes me back to 1975. And on boarding my connecting flight, did I even hear someone whisper the phrase once immortalised by that poster girl, that angel in the advert? – “Hi, I’m Mandy, fly me.”

Perhaps not. It was probably just the jet lag.

For issues affecting India: check out Colin’s East by Northwest site at colintodhunter.blogspot.com 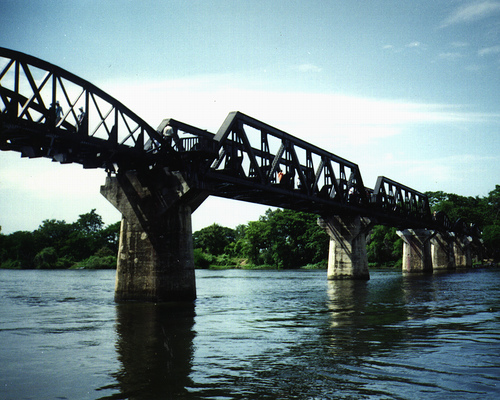 Cast adrift on the River Kwai