So you want to go to Tangier? Great idea: you’ll love it. The city consists of many fascinating hybrids: of northern Africa and Southern Spain, of a Mediterranean port city and a desert oasis, and of a historical monarchy with a progressive king. An eager traveler could spend days in the city itself, but if you had only one day, roughly 12 hours, to try and gain a glimpse of the city, it could be done. It has been done, by me. Many excellent tours will meet in Tarifa (on the Southern point of Spain), assist their groups onto the right ferry, adeptly handle paperwork, and then share their local’s knowledge of the city. This essay is not a guidebook advertisement, but rather a recommendation from personal experience. A strong recommendation at that: my trip was phenomenal, but there are three lessons I learned during my day in Tangier which would have been helpful to know prior. Lessons I definitely have not forgotten. Lesson one: do not take pictures of the vendors in the market. The market, a staple among both locals and visitors, will disorient even the time-tested traveler. As soon as you meander through the arches into this ancient space that people have frequented for hundreds of years, myriad spectacles such as dazzling sights, curious smells, and a cacophony of the sounds of daily life inundate the senses: white fish caught that morning on the way to someone’s kitchen, fresh vegetables sorted by color creating a rainbow stretching over adjacent stands, a pile of cow heads going through separation anxiety from their previous bodies. This bazaar strays far from the Western concept of a farmer’s market, and the vendors are not typical either. In this brave new world our guide, Mohammed, proved indispensable. My first instinct was to whip out my camera and snap some photos as we stopped periodically to take in the mélange that was around us. However, Mohammed silently gestured that I should stow my Nikon. This rejection did not shatter my experience, yet I was still slightly disappointed, at least until Mohammed whispered his wisdom on the trade-off photographers receive in that market: a bloody handful of cow sinew lobbed from behind the stall. Mohammed explained to us that vendors do not appreciate tourists sauntering through the market, taking excessive amounts of pictures, and creating traffic jams in the narrow lanes between the splintered stalls. Therefore, when they see cameras, they dispose of their garbage on the would-be-photographer. If you are looking for a still life of a pile of vegetables, your reprimand could be a mild inconvenience: a pear core or pieces of rotten tomato. When the eager observer braves the dramatic, a memory of the pile of cow heads, trouble will follow. Lesson two: just be married. When travelling in any group outside of two, same sex, platonic friends, just say yes to the idea of marriage. Don’t get married in Tangier; that bears all makings of a customs disaster. Seeing a man and a woman travelling together, many Moroccans assume the couple is married: either young and on an “exotic” honey moon, or just a normal excursion. The tourism industry has increased significantly since 1999 when King Mohammed VI inherited the monarchy and redefined Morocco as a desirable destination for Western tourists, stressing its affordability, exotic flare, and safety. Tourism is still in growing, and older generations have not grown up with the same exposure to diverse international communities. So as my friend Liz and I strolled around, speaking with people as we passed, our marriage was simply assumed. This pleasantly surprised us, not knowing we were married, only to find out about our matrimony in the winding streets of Tangier’s ancient quarter … very romantic. We followed Mohammed’s advice yet again, and just went along with the assumption. Our cooperation made sense, as we would never meet these people again. To take the time to say that our friendship was platonic and our vacation just for leisure equated to time wasted.

By the time we finished our lunch of ferakh maamer, roasted chicken stuffed with fresh couscous, Liz and I had rehearsed our love story: newly married, we decided to spend Easter in Seville (where Liz had actually studied abroad) with our brief excursion to Tangier for some flare. The boldness with which we told normal people our fabricated life story surprised even us. However, this did not define our trip, and has made the prestigious list of tips only for its general purpose: do not challenge people’s cultural assumptions in the course of casual conversation. Passersby earnestly tried to make conversation, and their efforts were genuine, never hostile. Instead of getting bogged down in a quagmire of semantics, we spent time chatting with the woman at the spice store about how she came to be an expert in the niche area of herbal teas and local spices. This openness would not have been possible if we greeted her inquiry of our marital status with standoffishness. Plus, this makes a good story, so there is an additional bonus to a good attitude!

Lesson three: perhaps the most important and obvious, but the one that has the most problematic potential – the time difference. Spain is five hours ahead of New York, as the flight is east over an ocean. Tarifa (Spain) is a half hour ferry ride due north of Tangier, yet the local time differs by one hour between the two cities. To further complicate matters, Spain and Morocco have daylight savings a month apart, so when we traveled there in early April, there was a two hour time difference between Spain and Morocco. And we planned a round trip outing for one day. Thank god for Mohammed and his ability to move us through the city and back to the port. We still experienced our full itinerary, yet when the time came to face the hordes of people waiting for the coveted few spots on the ferry, he adeptly escorted us to the right people, shook the right hands, and miraculously positioned us at the front of the line. Liz and I could not fathom his endless popularity with the guards and staff, but we felt no moral obligation to object to our VIP treatment. By the grace of Mohammed, our all-powerful and all-knowing guide, we made the 7:00 ferry.

With our farewell words, Mohammed assured us we had plenty of time to catch the last return bus to Seville. He also coerced our promise that on our two-and-a-half hour trip back that we would recommend him to our co-passengers. Helpful yet assertive and witty. We arrived back in Tarifa, took the shuttle to nearby Algeciras, and enjoyed the good fortune of watching the last bus to Seville pull away as we were pulling in. Not only had we missed the last bus, but we had the assurance that we were stranded – wonderful. We did not become too familiar with Algeciras during our sojourn, but I can assure you that at 9pm there are no train stations, travel kiosks, or buses to be found. What followed was a preposterous hour-long manhunt for a cab driver naïve/charitable enough to drive our pitiful selves to Seville for half of what the others asked. We found a gentleman kind enough to provide the service for two thirds the original price – still a whopping 90 euros each – with the additional bonus of not abducting and murdering us.

I have never so joyously bolted into traffic as I did once our taxi deposited us safely in the middle of a tumultuous intersection. We stumbled back to our hotel in a daze, reveling in our success. Perhaps I am not giving our taxi driver due credit. He dispelled all our concerns of being hoodwinked or worse, but our nerves had conjured sensational stories of kidnap, extortion, and murder, especially with our bargain price. Therefore, ending the day with our lives not taken, our wallets in our pockets (empty, but present), and our cameras filled with pictures (of everything but cow heads) seemed like an occasion worth celebrating. And we celebrated by sleeping. And so, having braved the perils of a marvelous trip, one that could have easily ended horrifically, I now present these three tips for a trip to Tangier laden with positive-memories. Enjoy! 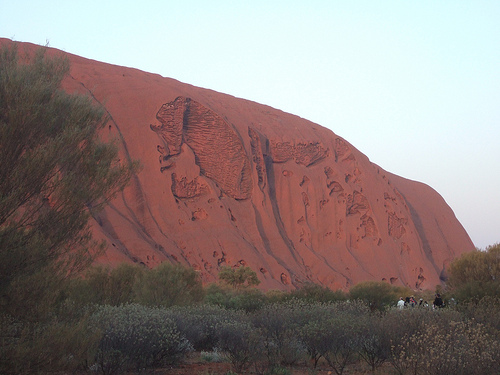 In the heart of the country: Australia’s Red Centre

Look before you squat on an Indonesian toilet