For those people who live north of the 49th parallel, in wintertime thoughts of clear, cloudless skies and never-ending gloriously warm days are never far away. When grey clouds and rain showers continued into March, our carry-on luggage was already organized. We booked a flight and fled south to sunny Arizona. Arizona is a state of tremendous diversity. Its coldest and hottest temperatures can be recorded on the same day with snow falling in the north and at the same time temperatures rising over 90ºF in the south. Changes in elevation are extreme, too, ranging from a lofty height of over 12,600 ft. to a low of 70 ft. The state is home to the second largest uplifted plateau on planet, known as the Mogollon Rim, which stretches for almost 300 miles. Furthermore, here one can gape in awe at the splendour of the Grand Canyon.

So much to see and do! Where to start? We began our trip in Gold Canyon, a small community abutting the Superstition Mountains, just east of Phoenix, the state capital. Our timing was perfect. Blue sky and sunshine greeted our arrival. Unbelievably just two weeks ago a thin layer of snow had covered the ground! Everywhere in the south-west, we saw towering saguaros, tree-sized cacti. These plants are native to the Sonoran Desert, can grow as tall as 50 ft. and can live for two centuries. They seem to endlessly march across the desert landscape resembling an army of soldiers. We spent some time exploring nearby Goldfield, a former gold mining mecca which segued from boom to bust and became a ghost town. A gold rush occurred in this area in the early 1900s when men flocked to the Superstition Mountains to make their fortunes. Now school children and tourists come to watch the staged gunfights, view its historic buildings, visit the museum, ride on its narrow-gauge railway and learn about Arizona’s wild west.

From many different directions, a towering 1,000 ft. high column of rock dominates the landscape. This unmistakable landmark is Weaver’s Needle, the remnant of an ancient volcano. The most spectacular views of the Needle and the Superstition Mountains beyond are from Freemont Saddle. A moderately strenuous hike with an elevation gain of just over 1,300 ft. would bring us to the pass. A forest ranger greeted us as we set off along the Peralta Trail. He was there to gently remind hikers of the unwritten wilderness code: “Pack it in; pack it out”. As we plodded up the steep slope, the temperature rose to record-breaking levels. En route, the vegetation changed many times. At the trailhead, there were palo verdes, sumacs, wild oaks and hedgehog cacti. Higher up we passed a sea of saguaros, barrel cacti and mesquite. The climb continued relentlessly upward. The switchbacks seemed eternal. Several hours later and countless calories lighter, we reached our destination. And, oh my, was it worth the effort! According to legend, in the Needle’s shadow may lie the entrance to what was once believed to be the richest gold mine in the world.

From Gold Canyon, we took a circuitous route northwards along winding roads with “mountainous grades” towards Sedona in the heart of Red Rock Country. En route we stopped briefly in Jerome, a quirky little art community, precariously perched on the very edge of the hillside. When the copper mining boom was at its peak in the 1890s, this “City in the Sky” was reputed to be one of the most famous mining camps in the country.

Originally known for its orchards and fruit trees, Sedona is a charming town. It is surrounded by distinctively-shaped rust-coloured sandstone rock formations formed by the perpetual erosion of wind and water. There is Coffee Pot, Elephant Head, Cathedral, Courthouse Butte and even Snoopy Rock. It is hard to imagine that, in all probability, these impressive rock spires, buttes and mesas could be worn flat again in two million years! Tourists come to Sedona to hike, horseback ride or mountain bike along its 300 miles of trails. Some visit its many national parks and art galleries. Others experience the energy emanating from the spiritual vortexes. And others simply enjoy its fine restaurants, stunning sunsets and natural beauty.

Situated between towering cliffs, Sedona’s architectural gem is the Chapel of the Holy Cross. Luckily, we took the local tour trolley here as car parking is definitely at a premium. Designed by Marguerite Brunswick Staude, a student of Frank Lloyd Wright, the chapel is located atop a 1,000 ft. high red rock wall crowned by a reinforced cross that soars 90 ft. skywards. It is truly inspirational.

However, we were anxious to explore some of the best hiking trails in Sedona. So we donned our hiking boots, filled our water bottles and packed a light lunch. As a warm-up hike we chose the scenic Broken Arrow Trail. It’s best to start early as this area is also a favourite for jeep tours. We saw one jeep precariously balanced on an enormous boulder. Obviously, this driver’s daring feat hadn’t end well. Juniper, pinyon pine and the ubiquitous prickly pear cacti bordered the well-marked route as it wound its way among the towering red rocks. Then the path climbed gently for several hundred feet to Chicken Point, our destination. We felt on top of the world. The views were picture-perfect. Only in Red Rock Country does one find vistas such as these.

Somehow there’s nothing quite like a train journey to make people nostalgic or perhaps to fulfill a youngster’s dream. At the Clarksdale depot we hopped aboard one of the vintage rail cars of the Verde Canyon Railroad. Our excursion train was powered by two smart blue “iron horse” locomotives emblazoned with a white bald eagle in flight. Straightaway “Arizona’s longest running nature show” began. By chance, we secured two first class seats where we were greeted with a champagne toast. At any time, one may wander down to an outdoor viewing car for a “second seat” and a 360° view of the valley.

It’s a memorable four-hour return trip along the Verde River to Perkinsville across ancient trestles, through curved tunnels, past undisturbed wilderness and ancient cave dwellings. Over the PA system, we hear stories about the cliff dwellings which the Native American Sinagua tribe occupied around 1100 AD. We learn about the trials and tribulations of the men who laid the rails around the time of World War I. We are regaled with possible sightings of bald eagles, blue herons, mule deer and perhaps even mountain lions. We hear tales of the pioneering spirit of the early homesteaders at the turn of the last century. We discover the names of several distinct rock formations, the plants and cacti that dot the landscape, the native trees that border the Verde River and the fish that thrive in its waters.

Occasionally, when our trusty broadcaster lacks for words, such songs as “The Last Train to Clarksdale”, “Do the Locomotion” and “The Midnight Special” float across the airwaves. Trains have chugged along these tracks for over 100 years ago, first carrying grain, freight and livestock and later transporting copper ore. Today, it’s ecotourism that has brought a degree of prosperity to the Verde Canyon.

But we saved the best till last. Definitely, the highlight of our Arizona visit was a sunset excursion to the Grand Canyon. We saw one superb panorama after another. Everywhere we looked there were distant ridges, steep cliffs and stunted wind-blown trees. The canyon was created 5.7 million years ago, extends for nearly 300 miles and has been inhabited for 10,000 years. In the canyon one mile below us the Colorado River slowly snakes its way to the ocean. That day the air was crystal clear. The light altered at every turn. The shifting compositions seemed endless. There were ever-changing nuances of light and shade, of bright and dark, of rough and smooth. It was a photographer’s delight. We watch transfixed as the sun’s golden orb sank slowly in the West, turning the sky from blue to pink to crimson. In the background, a native drum beat rhythmically accompanying the sun’s descent. The epic grandeur of the Grand Canyon is overwhelming. It exudes an awesome beauty. Its mystical atmosphere is spell-binding. It truly cannot be described. Simply put, the Grand Canyon has to be seen in person. No wonder it attracts millions of visitors every year!

Sadly, we must soon leave the Arizona sunshine and bid our fond farewells to the “Sunset State”. We’re returning homeward with a wealth of treasured memories … memories of desert vegetation and red rock formations … of natural wonders and wilderness areas … of ghost towns and train journeys … of Arizona’s history, geology and Native American peoples. To quote the State’s motto “Ditat Deus – God Enriches”.

Motorcycling right the way across Laos 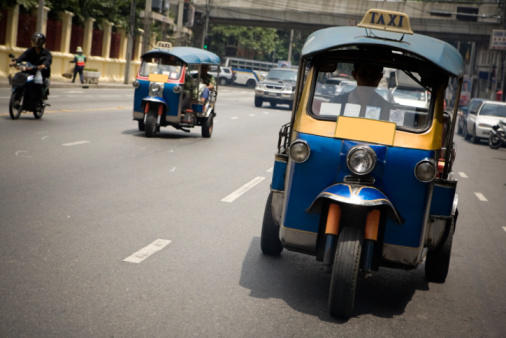 Why choose a flight to Australia stopping in Thailand?