June, the first month of summer, has just gone by and the sun in Greece is shining bright and worm. Living in the Greek capital this time of the year can be very challenging as the high temperature during the day is exhausting if you are not in a room with an air condition or a fan. An unexpected proposal a few days ago made me travel for three days to Andros, the second largest island of Cyclades. Although it is the closest to Athens island of the Greek group of islands in the Aegean Sea, this was the first time for me to go there. About three times in the past I’ve travelled to the island of Tinos, and before we arrive at our destination the ferry made a stop at the port of Gavrio in Andros. At that time I had no idea of how beautiful the island really is, as Gavrio is a small town with no trees or any other kind of vegetation. With two friends of mine, one of them has family there, took the early boat from the port of Rafina and in two and a half hours was there. Another friend was coming at the afternoon.

We went with a car, so we had no problem to explore the island in the best way we could. The first thing we had to do though is to find our hotel, which was at the town of Batsi, about 15 minutes from the port by car. Batsi is the most touristic town of Andros, along with Korthi and the Chora of Andros. The father and son who owned the hotel Adonis were very kind and helpful, and the balcony in front of our rooms had a perfect view over the entire town. It was around 13:00 o’clock and the sun was high. A light breeze was able to cool us for a bit, but we needed to take more drastic measures. That means that we wore our swimsuits and went at the beautiful beach of Chrissi Ammos (Golden Sand), which is located between Gavrio and Batsi. The beach was full with people and the DJ at the beach bar was playing some of the latest hits, from Lana Del Rey’s “Summertime Sadness” to “Get Lucky” by Daft Punk. The water was clear and cold enough to take the heat away.

Close to the beach, at the area of Agios Petros (Saint Peter) there was two taverns the one next to the other. At “Maria’s” tavern we took our first meal in the island and at “Giannoulis” our last before we leave for back home. The food was very tasty. The most famous traditional dish of Andros is Froutalia or Fourtalia. It is an omelette, made of not just eggs, but also of sliced potatoes and traditional sausages fried in pork fat, that gives a very exquisite taste. The rest of the day ended with picking up the last friend from the port and exhausted as we were, we went back at the hotel for a nice bath and some rest. Later at night, we ate something at a creperie in Batsi, had a drink at a very cosy bar and went for a small stroll by the sea, counting the stars and looking at the breathtaking full moon at the cloudless sky.

The second day was supposed to be the fullest of all. We were about to discover a large amount of the island, including the Chora of Andros. We woke up as sooner as possible, if you consider that last night we went to bed extremely late, and started by going to the popular beach Tis Grias to Pidima (The Old Lady’s Jump) that is situated near Ormos, at the municipality of Korthi. The name originally refers to a local myth according to which an old lady committed suicide by jumping off a cliff in that location.

Korthi is located at the east side of the island and is one of the largest towns of Andros. In order to reach the beach Tis Grias to Pidima, you have to drive through Korthi and after a few miles of dirt road you have to walk down for about 10-15 minutes a slope with small made of stone steps. The hot sun makes the descent very difficult, but once you arrive at the beach the wonderful sight and the incredible water will reward you for the hard effort.

Be prepared in advance to have with you cold water and food, because the beach is not organized. We were not prepared so after several hours without anything to drink or eat, we left the beach for the Chora of Andros. Chora is the main town of the island. The houses are built in the typical Cycladic style, with doors and windows painted in many different colours, while the rest of the house is white. The most interesting thing that occurred to me, was the too many cats that wondered around the streets. In Chora you must definitely visit the square of the Unknown Sailor, where there is a big statue of a sailor gazing at the sea created by Michalis Tombros. From there you can see the whole town and you can even climb a brick bridge, that connects the mainland with a small island that has on it a ruined Venetian castle and from there you can see an even smaller island with just a lighthouse on it.

The Chora of Andros has four museums. An Archaeological Museum, a Nautical Museum, a Folklore Museum and the Museum of Contemporary Art founded by Basil and Elise Goulandris Foundation in 1979. Born in Andros Basil Goulandris was not only a successful ship-owner but also a passionate art collector, who along with his wife Elise felt the need to sponsor and support many and different kinds of artists, and a Museum at his birthplace was a perfect idea. Situated at the centre of the town it is easily accessible by foot and it is closed during the noon. It took us the whole day to travel around Andros, but at the way back we were lucky to see the beautiful sunset, minutes before we arrive at Batsi. The glorious sun immersed into the deep blue Aegean Sea, taking with it all the heat of the day. At night, after we walked for a while at the promenade, we ended at a “all Greek” club, that played music from the 80’s-90’s till today. Early in the morning we returned to our hotel, only a minute away from the club.

One day has left and we were committed to live it to the fullest! After we settled our economical obligations with the hotel we hit the road once again. This time we went to the upper east side of the island and the amazing beach of Zorgos. Instead of sand, the beach is full with pebbles of many and different colours. The light blue water is deeper than at the other beaches of the island. An interesting fact about Andros is that you must choose where to swim depending on the weather. Like most of the islands in Cyclades, strong winds are normal during the summer time.

It was about time to leave the beautiful island of Andros. Our ferry was leaving for Rafina early at night so we were at the port of Gavrio about two hours before the departure. There was no way to leave Andros without buying Amygdalota. The traditional macaroons made in Andros are famous in all over Greece. Made of almonds, sugar, albumen and rose water are the trademark of the island, along with the soft local cheese. Although we’ve been there for just three days, it felt like it’s been more than a week. We explored almost the whole island and saw most of the things that we could see in three days. Andros is also famous for the monasteries, with the monastery of Agias Marinas, Panachrantou, Panagias Tomarchianis and Zoodochou Pigis being four of the biggest ones. Unfortunately we didn’t have much time to see them all, so that’s a good reason –but not the only one– to visit the island once again in the future. 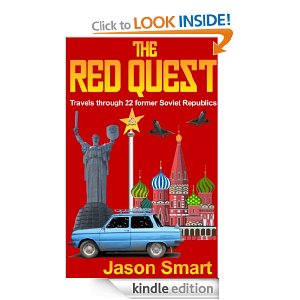 Made in Mostar: small beggars at work

Living in the City of Kings: Lima, Peru