Despite the weak pound, the traditional booze cruise from the UK to France is still alive and well. Alcohol taxes in France are well below British levels and while you’d have to shop on a pretty industrial scale to turn much of a profit, it’s easy to offset your travel costs. Add in an overnight hotel and a decent restaurant meal or two and you’re well on the way to a decent weekend that pays for itself. The Eastern Crossings, with ferries to France leaving from Dover, Folkestone and Newhaven are by far the least expensive. The distance travelled is shorter and the competition on this route is fierce: there is a good choice of routes and operators. Smokers should opt to land in Belgium on the slightly longer crossing to Ostend. It’s an extra half hour on the water but sidesteps a new clampdown by the French authorities, who strictly limit how much tobacco travellers can bring into France from – much cheaper – Belgium, which also catches Brits fleeing to board their ferry home. Vive le Marché Commun! The quickest crossing to France is using the Chunnel that spends a mere 20 minutes skimming under the sea and although tickets are a bit more expensive incidental costs are lower. Getting a family of four through a 90-minute ferry crossing can be an expensive business as there are shopping opportunities on every side.

You don’t have to get far into France to benefit from the different range of products available. Calais is fine for a supermarket shop. If you’re looking for familiar varieties there are a number of British off licenses selling traditional Aussie and South African wines but for the best value buy French. A huge amount of the annual vintage is already poured into wine lakes and even cheap French wine is usually pretty drinkable, and the proportion of the price which is tax is much higher on inexpensive wine. Wine boxes pack much better into your average car and are lighter. Meat is generally more expensive in France but cheese is cheaper – and the choice is better.

If you’re making a weekend of it Calais is not the most beautiful city in France. Not really their fault, because it was largely trashed by British bombs in World War II, but there’s much more to be said for the neighbouring town of Boulogne, a short drive down the coast. This isn’t much better for food – think cheese and lots of it – but the old city centre is far more atmospheric and there’s a good range of cheap hotels. The longer crossings on the Western route are more expensive and time consuming. Taking car ferries to France from Pool, Portsmouth and Plymouth you’ll want to make a cruise of a journey that can easily take most of a day – or alternatively book a cabin for an overnight journey. The advantage is you reach a far nicer bit of France. The ports of Cherbourg and Le Havre are no beauties – we bombed them too – but if you want an edgy experience of working-class France these are very good places to do it. St Malo and Caen spend slightly longer on the water but get you deeper into rural France. A few miles drive out of any of the Western French Ports will quickly find your in a ‘Peter Mayle’ idyll of idealised rural France. The countryside here is green and beautiful, somehow the sun always seems to shine, and the Calvados flows freely over a good range of regional cuisines.

And once you’ve outweighed your travel costs with a supermarket load of cheap wine, you can seek out other specialist products that you’ll only find in France. Take a wander around a French garden centre and you’ll see a hugely different range of products on sale. On my last trip I bought a superb mole trap that detonates explosive charges underground. I’ve now banished the little varmints from my lawn. But they will presumably come back so I’ll soon need new charges. Explosives are strangely difficult to bring back by air so I’ll have to make another sea crossing to France. And of course buy a small pool-full of wine to pay my way. 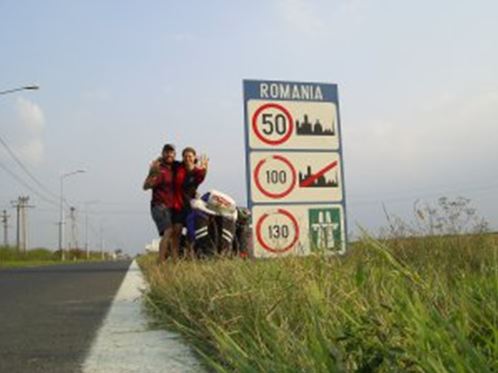