‘One night? That’s nothing.’ My friend Jeremy looked unimpressed as I regaled him with stories of my extreme sleeps so far. ‘You’ve heard of Millican Dalton right?’ he continued.

‘Who?’ I asked, feeling ashamed that I didn’t instantly recognise the appellation.

‘Millican Dalton. He lived in a cave in the Lake District for most of his life, shunning a London job and home in the process,’ he explained, handing me a book about this old wild sleeper. A quick skim through revealed this intriguing character to be so much more than just a lover of sleeping outdoors. He was something of a revolutionary. On quitting the conventional life down south back in the 1930s, this self-styled Professor of Adventure took mixed groups of men and women out climbing, walking and camping – all very taboo at the time (especially the women part). He was a pacifist, teetotal, vegetarian who arguably invented some of the first lightweight kit out there. Looks-wise he sported a long beard and dressed in tramp-like couture, always wearing a Tyrolean hat with a Woodbine cigarette planted fi rmly between his lips. In his heyday, all this made him something of a celebrity in the Lakeland valley of Borrowdale.

The more I read about him, the more I wanted to see the place he used to call home. Jeremy, who I was staying with and who conveniently lives within spitting distance of the Lakes, had told me it was somewhere on Castle Crag in Borrowdale but that it was now under the care of the National Trust who, due to health and safety reasons, asked people not to overnight there.

I love the Lakeland landscape, the rolling fells, the deep pockets of water that radiate from its centre like a giant propeller and the different characters found in each of its naturally formed valleys.  But at times, nowadays, the Lake District can feel a little bit twee – especially in the summer.

Picking up an Ordnance Survey map in Ambleside I headed to the nearest coffee shop to begin a hunt for the likely spot of Millican’s cave home. It didn’t take much searching. There, marked below the contours of Castle Crags peak, was the simple word ‘Caves’ slapped somewhere between the summit rocks and the footpath that skirts at the bottom of its flanks.

This threw up two problems. The first was that I would be risking the embarrassment of being found out by the National Trust bods and asked to move on; this, I reasoned, could easily be overcome with a feigning of ignorance.  But the second and slightly more troublesome problem was the issue of my fear of caves. I may love the outdoors and camping, but caves are something else entirely – they are the opposite of the landscapes I adore.

As I alighted at the head of the valley the driver eyeballed me suspiciously. ‘You staying at the hotel?’ he asked as I followed behind the last of the passengers – all of whom he appeared to be on first-name terms with.

‘In a manner of speaking,’ I mysteriously replied in as casual a tone as I could muster. He seemed to shake his head slightly as he swung the doors shut and I panicked that he was now heading off to alert the authorities. Regardless, I began walking further down the road than his bus route ventured, eventually picking up a track that took me level with the hill that hid Millican’s cave.

Though small, from the approach the fell looks seriously pointy – like a proper mountain in miniature. Seeing as I could ascend it in no time at all, I decided to head to its summit first, then make my way down from there to find the cave. It didn’t take long to reach the top. A well-structured path contoured around its slopes like a slate helter-skelter. Something that well-made in Lakeland is a surprise to enjoy without an entrance fee. The miles of water stretched like a giant looking glass all the way to Keswick, reflecting the surrounding fells in the mirrored surface. Being late autumn, the higher peaks were coated with a thin dusting of snow, accentuating their height spectacularly.

Whether it’s the mystical qualities of old trees, the noticeable temperature drop always experienced when you enter a wooded area, or the amount of wildlife hidden in the forest undergrowth – I don’t know, but the fact is, woodland can be pretty forbidding.  That was a thought I was trying to shake off as I stepped off the familiar trail to feel my way through trees laden with thick blankets of wet moss. I had one navigational hint on my side – I knew that at least I was heading downhill – but other than that, after the first five minutes, I couldn’t have pinpointed my location on a map if you had offered me a million pounds.

For a place so sheltered from the elements, it certainly had taken on a lot of water. My feet were already wet from sinking into pockets of murky puddles that from the surface appeared as perfectly amiable pieces of fi rm grass. Solidlooking trunks of fallen trees broke unexpectedly under foot, and branches I grasped for stability suddenly gave way, sending me flying downwards by several feet. It certainly felt like I was in something of a battle with this landscape and knew that the odds were not in my favour.

My task it seemed had encountered a hitch and, without really know what I was doing, I closed my eyes and span around, stopping when I thought it felt right, then resolutely heading in that direction. It was clearly the action of a desperate and slightly crazy person but remarkably, it worked. Seconds later I found a fainter tracing of a trajectory underfoot and something in my head told me it was right. Then I saw an opening – a cave. Nothing deep and menacing, just a large opening in the rocks. It wasn’t it, but I knew I was getting close.

Millican Dalton’s abode was famous for being split-level – a kind of penthouse in cave real-estate terms, both upstairs and downstairs accessible by naturally occurring stone steps (all very ‘new’ Lake District if you think about it). Not knowing if this feature had survived the years during which the cave had lain without an occupier, it was all I had to go on so I was keeping my eyes peeled for it. I headed further up the slopes until a huge slab of rock blocked me from going any further.

It felt like I was nearly there and I wasn’t going to let this stop me, so I cut around its edge as close to it as I could until I came to a flattened section of ground and, sadly, a couple of discarded beer cans. Someone had been here before and I was willing to bet Millican hadn’t left a stash of crumpled Stella Artois tins here before he went.  Then, out of the corner of my eye, I spotted it. At first I thought I was just my imagination, but this was too clear. There in the rock, next to a cavernous arch-like crag, were letters carved into one of the walls. I practically ran over to read Millican’s self-penned epitaph:

It was amazing to have heard about this inscription in the days leading up to this trip and to finally see it in all its glory. Their presence meant that I was in fact in the upstairs of this rocky apartment, somehow having bypassed the downstairs. I chucked off my backpack and searched around in the lid for my headtorch. Shining it inside, I saw the back wall; this wasn’t a scary, deep tunnel cave after all but a fairly shallow natural shelter, big enough to keep the wind and rain at bay, but open enough to prevent a closedin feeling. I shone the light around and spotted the start of the stairs. Heading inside, where the echoes of the dripping water reverberated from the rock around me, I took the stairs down to the lower floor. Here the cave was easily three times the size, stalactites hanging down, some clusters resembling rocky chandeliers. Millican had boasted many times about how his cave had running water and from down where I was he certainly wasn’t wrong, a constant trickle was definitely flowing. The temperature was several degrees cooler than the forest even, and I was thankful I’d brought with me a waterproof sleeping bag and plastic cover.

I woke early and tried to rest my eyes several times but soon realised it was pointless; I was alive with excitement knowing that Millican himself must have enjoyed similar encounters with the locals, probably on a daily basis. Instead, I lay facing the fells outside, drifting in and out of consciousness, every so often watching the sun beginning to create a fuzzy light behind them, slowly bathing the landscape in its pale yellow hues.

Eventually it was light enough for me to class this as spending the night there and I got out of bed to begin deflating the mat and pack away my sleeping bag – best not to chance getting caught by an early-morning patrol.

It was only when I was outside Millican’s cave, and glanced back at where I’d called home for the night, that I spotted a National Trust sign advising people to be aware of falling rocks, not to light fires and certainly not camp. Though the advice was probably sound, the plaque it was on felt like an intrusion and could even act as a beacon alerting people to the fact that the place was there and a potential spot to overnight in. Completely pointless, while at the same time, goading you to try it. The more I scouted out the area around the cave, the more empty bottles, cans and sweet wrappers I found. It was very sad to think of this, a muchloved home to a man for whom nature really was his haven, now littered with the spoils of modern-day convenience. 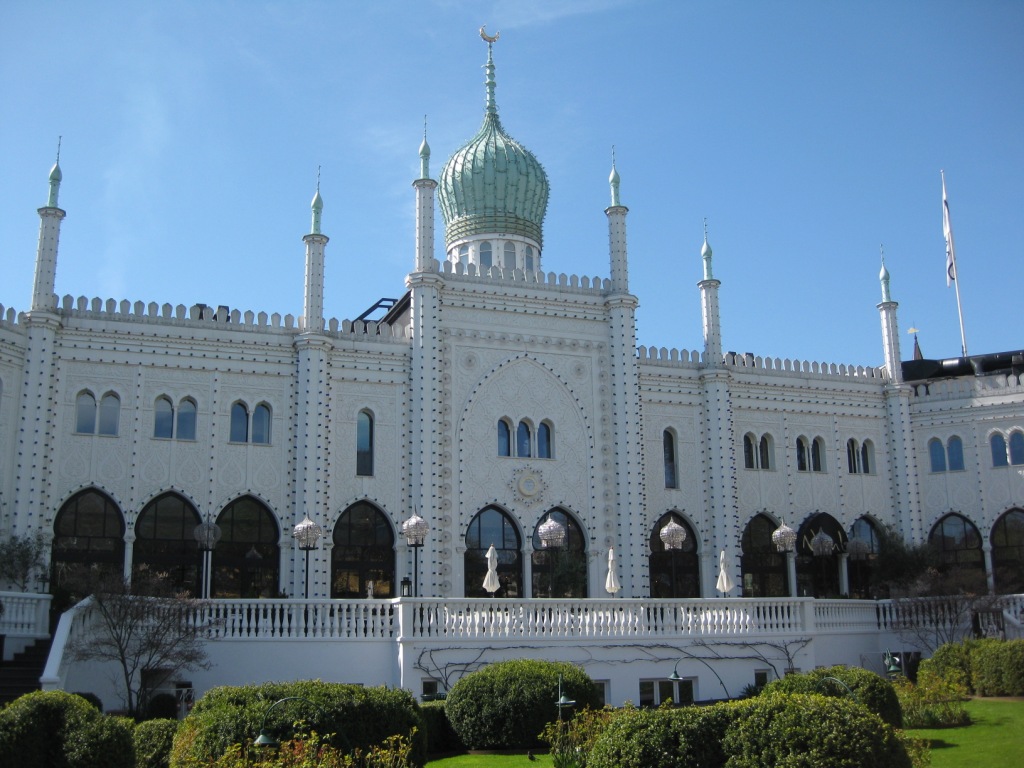 There’s something for everyone at Tivoli Park