I’ve been to Paris several times. Even lived there for a brief period. But my first trip was the experience I remember most.

There’s something about a little bit of drizzle on a cloudy Parisian November day. A slight chill in the air nipping at a warm sweater, is made bearable when soaking up the French magic by the cup full.

I was 25 years old, sitting alone in a cafe along the Champs-Élysées after a packed day of playing tourist. Facing my chair toward the street alongside hundreds of others, I noticed the Arch de Triumph had become silhouetted by the fading light. The sound of raindrops grew louder as they pelted the canvas awning above me…and I nestled into a corner. Warm, dry, and satisfied with a freshly brewed French roast.

Paris is a fast-paced city. It’s easy to get trampled if you don’t move with the cadence of the crowds. So it was nice to slow down, take a moment, and replay the days events from the safety of the sidelines. The culture, cuisine, and masterpiece canvasses are some of the things which make the ‘City of Light’ famous the world over. Earlier that afternoon, one poignant moment (in a popular point of interest) was underscoring the contrast between these two Parisian experiences. On a wall behind a shelter of glass, Da Vinci’s most famous portrait hung shielded from the storm of activity that surged in front of her. Throngs of tourists had become hoards of locust before my eyes, as flashbulbs exploded over the tidal wave of chatter. Remembering her slightly turned smile in her room of self isolation, I wondered, “Had I just unraveled the mystery behind centuries of speculation?”

Breathing in the cool air….slowly…exhaling even slower, I resumed my people-watching prowess from my warm, dry perch. Women wearing the latest fashion with names I couldn’t pronounce, walked by me without so much as a glance. They moved quickly in their heels, leaving behind a trail of perfume that teased and danced around me. Men with chiseled bodies in silk suits with wristwatches that cost more than I made in a year, strutted past in confident strides. Everyone charged forward holding umbrellas to shield their perfect hair from the slanting rain.

Taxi horns blew loudly as the drivers whisked busy patrons to points unknown. It was a dazzling display of everyday life in Paris. I had a front row seat at the center of the universe…and it was magnificent!

I don’t remember when the rain stopped or how many cups of coffee I had. But I remember being surprised, as I walked along the banks of the Seine back towards my hotel, that somehow I managed to find a bit of quiet in even the noisiest of locales.

Which brings me back to that painting and the mystery I believe I’d solved. This sly, unknown Italian aristocrat was smiling because she knew. She knew the greatest of Parisian experiences wasn’t standing in front of her with a camera in one hand and bucket list in the other. Rather, it was finding an ordinary cafe with a view of a different kind. A simple Parisian vista, it seems, can lead to a breathtaking experience. If you’re willing to sit…sip…and breathe it all in. 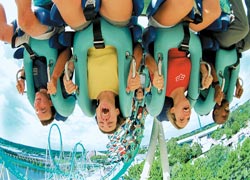 How to make the most of your family trip to Orlando