Twenty years ago Shyam Dhaubhadel held his son’s funeral and resolved to work in service to humanity.

The traffic accident that killed four year old Siddhi inspired Shyam to create a charitable health foundation, that resulted in a 50 bed hospital for women and children in Nepal that can deal with the traditional diseases of the developing world.

But like most hospitals in the country, it cannot deal with the rapidly growing danger that inspired it – traffic accidents.

“We can give them a bandage for a broken bone or a cut but that’s it,” said Shyam.

Nepal’s terrible road safety record is no surprise to anyone has visited the mountainous country. Taxi drivers laugh at your attempts to find a seatbelt. Cows wander in the outside lane. Buses race down mountain roads with passengers clinging to the roof.

The difficult terrain and basic hospital facilities mean there is little chance of casualties receiving quick, advanced care. The fatality rate in 2009/10 was 17 deaths per 10,000 registered vehicles, one of the highest rates in the world.

Most crashes are in the relatively developed Kathmandu Valley but the mountainous roads are more dangerous per journey. A typical Himalayan Times story from May 29 said 15 people died and 31 were injured when a bus skidded of the road in Sindhupalchowk district and fell 100 metres down a hillside.

“Six passengers jumped off the rooftop and survived. Altogether 55 passengers were on board the ill-fated bus.

“Police said that speeding could have caused the accident. The kin of the victims have warned that they would not accept the bodies unless they were compensated properly. The bus driver is on the run.”

The injured were relatively lucky. They were flown to Kathmandu in Nepalese Army helicopters for treatment. Most accident victims arrive at hospital by taxi and only the best hospitals in the biggest cities have the facilities for dealing with serious crash victims.

There are well regarded hospitals in Kathmandu – like B&B for orthopaedic cases or the Tribhuvan University Teaching Hospital for trauma – but the private fees are beyond the reach of most people, and spaces in the cheaper public facilities are limited.

She said: “It was overloaded with patients.

“We would get people from remote places where a truck or bus had fallen 100 or 200 metres.

“We had one driver who was brought in dead with his head split in two – that’s a difficult memory for me.

“People would come in 12 hours after the accident and be paralysed. If they had been treated a few hours earlier we could have saved their movement.

“The experiences changed me a lot. Now I cannot ride motorbikes or scooters and I am very nervous crossing the road.”

The Indian Government paid for a Trauma Center at Bir Hospital in Kathmandu, the biggest Government hospital in the country.

It was finished in 2009 but has still not opened to patients because of the difficulty in finding the running costs.

Western medicine emphasizes the ‘golden hour’ for trauma treatment yet less than 10 per cent of Nepali serious accident victims are taken to hospital in an ambulance. A study of injured people admitted to a hospital in the tourist hotspot Pokhara found 48 per cent of people were only admitted to hospital after more than six hours.

There were only 21 trained paramedics in the country in 2012, according to the Nepal Ambulance Service, and only 35 per cent of ambulance drivers have had first aid training. Most of the vehicles have little medical equipment apart from an oxygen cylinder and possibly an IV drip and most patients are driven over bumpy roads without neck braces.

Ashish Gautell, a traffic and transport consultant, said hospital trauma treatment needs to be improved “at the highest level”. But he pointed out better education and enforcement would cut down on the number of people needing treatment.

Ashish Gajurel, said: “Traffic rules violators are not afraid of the penalty because the penalty is very minimal.

He added: “The majority of people don´t know the purpose of zebra crossings and traffic signals. Traffic education needs to be started from primary schools as in the western world.”

Kathmandu’s traffic system mostly relies on police officers stood at junctions – itself a serious health hazard given the atrocious levels of air pollution.

The police credited a drink driving crackdown in the Kathmandu Valley with a drop in road accidents from 5,096 to 3,859 last year.

However drivers were only made to attend lectures. It was only later they were fined 1,000 Nrs (£7.50) and lost their licenses after five traffic offences.

This February Nepal unveiled its first national road safety plan, with a lurid front page photo of a crashed bus and dead bodies. There will be tougher penalties, counter measures at accident blackspots, systematic road safety education – and trauma training at all levels.

But putting words into practice will be the real challenge.

As in the health system in general, the problems are money, manpower and management.

In Bhaktapur, the emergency department at Siddhi Memorial Hospital is not well equipped for serious crash victims but they come anyway.

Isur, 20, a hotel management student, had a motorbike crash on the nearby Araniko Highway. He went head first into the other riders’ bike and needed stitches to his scalp.

“Quite a few of my friends have had crashes,” said Isur.

“It’s not safe driving on the roads. They need to be improved and widened.”

Another driver dislocated his clavicle at nearby Surya Binayak.

Like many motorcyclists he was carrying a passenger – in his case, a one year old, who somehow escaped with no serious injury.

Emergency Unit nurse in charge Rabina Kawan said: “Most of the accidents we get are from motorbikes. We give them painkillers and dressings and can treat simple fractures.

“If they need surgery we refer the cases on.”

Nepal’s health system has been geared around primary care and infectious diseases. But even in the Kathmandu Valley, the resources for trauma victims are scarce and costly.

The simple facilities on offer in Bhaktapur reflect the medical reality for Nepal as a whole, where most people live in rural areas with only basic hospitals nearby, where CT scanners or ventilators are beyond the doctor’s dreams.

A patient injured in Ramechhap, just 50 miles away from Kathmandu as the crow flies, might need several hours to walk or drive to the 15-bed district hospital, and then a six hour transfer in a basic ambulance to Dhulikhel Hospital, which itself is not equipped to the levels found in the capital.

Few people could feel a stronger motivation for helping accident victims than Shyam Dhaubhadel. Few people know better how difficult it is to fund a hospital.

“Creating a center to deal with traffic accidents would be really challenging for us because it’s so costly,” admitted Shyam. “But we still can’t avoid dealing with such cases now.” 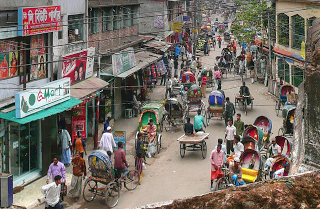 Have boat, will float off the coast of Bangladesh

Fending off professionals on a bar-crawl through Phnom Penh