“A decade ago, canoe-making was dying,” said master builder Tim Clements, a tall man with rippling muscles and a dazzling smile. He stood outside an open-sided, barn-like boat shed at Majuro, the most populated atoll in the Marshall Islands of Micronesia. Nearby, towering coconut palms leaned out over the shore of a vast, sheltered lagoon. He explained that he had learned how to build canoes from his grandfather on smaller, outlying Namorik atoll. “Several families on Namorik still had the knowledge,” he added, noting that each had its own distinctive style. “The different designs were like signatures,” he said. Clement moved to Majuro to share that knowledge and preserve a proud heritage.

A few paces away, a lithe teenager axed notches in a long log of breadfruit wood. Another youth used short, controlled swings of his adze to smooth out the rough cuts. Once the sides and bottom of the log were fully shaped and most of the inside wood removed, the dug-out hull would have a much smaller pontoon-like outrigger attached to it, and a sailing rig added as well.

I had flown to Majuro to observe the annual outrigger sailing races. These included canoes from two dozen atolls, each an irregular necklace of coral islands and reefs surrounding a lagoon. On the eve of the competition, a torchlight procession of boats made its way to a central landing, where a small crowd greeted crews with the blowing of the conch and bestowing of leis. Island chieftains and government officials gave speeches. On race day, hundreds of cheering islanders thronged the shore at the starting line, which was adjacent to the atoll’s paved airstrip. A 737 jet, which was making a refuelling stop, could be seen through the trees. A media boat broadcast a minute-by-minute account of the races, which enabled thousands more to follow the events live on radio. Cash prizes and bragging rights were at stake. One race was for small single-handed canoes, the other for larger ones carrying two men. Riding in the press boat, I got to see dozens of the sleek craft with brightly coloured sails careen at amazing speed around the markers. When hit by gusts of wind, some heeled so far over that their outriggers lifted right out of the water. A few tipped over and swamped, costing their crews so much time that they had no chance in the competition. The single-handed race ended in an exciting finish, with only a boat’s length separating the runner-up from the winner, a guy from Jaluit atoll who had also been victorious the previous year.

The sails of these nimble boats were of modern, synthetic fabrics, but in every other way they were just like the sailing outriggers that had so impressed Western mariners centuries ago. As the captain of the American schooner Dolphin noted in 1824, “Their canoes display the greatest ingenuity, and I have no doubt that in a ‘civilized’ country they would be ranked amongst the rarest specimens of human industry….They move through the water with astonishing velocity, and in turning to windward, no boats can surpass them.” When the weekend of race mania died down, I had the opportunity to go for a sail on one of the larger canoes along with three fellow visitors. On the beach below the boat shed, two teenagers readied a spindly 23 foot-long vessel with a triangular sail and a hull that tapered to a point at each end. We waded into the shallows and climbed onto a slatted platform that extended out from the hull to the shorter wooden outrigger. The skipper, a wiry little man named Hanej Helbi, was the last to board. The kids pushed us off as Helbi raised the sail and barked out orders. Instantly we accelerated in the brisk trade wind.

Churning a frothy white wake, our craft skimmed across the turquoise water, going so fast it felt like we were flying. One of the kids stood precariously on the stern, his toes gripping the edge of the deck. Leaning on the long steering oar, he focussed intently ahead. We flitted past Taiwanese, Russian, and Panamanian factory ships anchored among tuna seiners with clipper bows and scouting helicopters. The low shores of the 30 mile-long lagoon faded into the tropical haze. Occasionally Helbi gestured to us to shift our weight and keep the boat in proper trim. Like many islanders, he spoke no English.

Not that Micronesians have lacked contact with the outside world. Lying north of the Equator in the western Pacific, the region was first colonized by Spain and then Germany. Missionaries brought Christianity and modest clothing, and many people still attend church regularly. After the First World War, Japan took over. Following the Second World War, the U.S. tested nuclear weapons at Bikini atoll, forcing that island’s residents to move, mainly to Majuro, and leaving a legacy of radiation poisoning. There is still a U.S. missile-testing facility at Kwajalein atoll, and the U.S. dollar is the legal tender.

For all that baggage, the locals are warm and welcoming to foreigners. The commercial area of Majuro has a gritty, cash-strapped Third World feeling, with fuel-storage tanks, warehouses, and decaying wharves. The rest of the atoll, though, comes close to being an unspoiled tropical paradise. On the outer islands, people still subsist largely on fish, coconuts, and a little cultivated taro. A jet from Hawaii or Guam flies to Majuro almost every day, but there are few tourists.

As we scooted across the lagoon on the canoe, a small island studded with palms got closer by the minute. Soon it was time to tack, that is to reverse direction and have the wind on the opposite side of the boat. The procedure was unlike anything I had experienced sailing at home in British Columbia. The typical Micronesian lateen rig holds the sail between two lightweight booms that converge down at the bow. But bow and stern are identical, and the outrigger float always remains on the windward side. Instead of maintaining the boat’s speed and swinging the canoe quickly across the wind to come about, as in a conventional sailboat, the skipper dumped the wind from his sail, bringing us to a halt. Instantly, the kid up forward grabbed the low junction point where the booms met and passed it back to the other teenager, who re-attached it. The former stern was now the bow. The skipper sheeted in the sail, and we took off on the opposite tack, back to the beach and boat shed.

There I met Dennis Alessio, a burly American who offered me a refreshing guzzle of jakamai, fermented from sap that is tapped from the bud at the top of a coconut palm, much as maple syrup is collected. Alessio had been instrumental in kick-starting the renewal of canoe-making. “I helped build a large sailing ship in Seattle, destined for outer-islands clinic work,” he told me. He also helped deliver it. An old man on Jaluit atoll had given his traditional canoe to Chicago’s Field Museum for permanent display but wanted a replacement. Alessio, a skilled wooden-boat craftsman, agreed to stay on and build it, met and married a local woman, fathered four children, and had lived on Majuro ever since.

Alessio teamed up with Alson Kelen, whose family was from Bikini atoll and who had gone to college in Oregon. With Kelen as translator, they began documenting the canoe-building techniques on the various atolls. “I had no woodworking skills before that,” said Kelen, a heavyset man with intense eyes, “so I’m also a student.” He negotiates with property-owning families to acquire breadfruit trees for the canoes. For the hull they have to be large and straight. For the wooden boom pieces that project out and hold the outrigger, trees are traditionally planted where the wind will give them a particular curvature.

Eventually, families and teams on most islands were building and sailing canoes again. Then, the Hawaii-based Outrigger hotel chain decided to sponsor the annual races, a men-only affair. With solid corporate and government funding, the Majuro program also began building longer Hawaiian-style racing canoes that are paddled, not sailed, by teams of six young women. The sport is popular throughout the western Pacific.

Scuba diving is another local attraction. Foreigners come to explore huge ships sunk during the bomb tests at Bikini. The snorkeling is unmatched as well. One day, I rode a charter boat out to a secluded edge of Majuro lagoon, put my head under, and discovered a living wonderland in Technicolor. The water was so clear I could see at least 100 feet. There were flat yellow toadstool-shaped corals as big as a dining table, and white branching ones that reached almost to the surface, like huge antlers. Giant sea cucumbers up to a three feet long left faint trails across open sandy areas. Weaving in and out of the large coral heads were thousands of tropical fishes with fantastic shapes and resplendent hues. A cliff festooned with smaller corals and anemones dropped off into the cobalt blue depths of the mid-lagoon.

Jerry Ross, the boat’s American owner, told me about a hermit-like local man on one nearby islet. He lives on coconuts and an intensively cultivated garden. Holding his breath, he free-dives to 50 feet at night with a flashlight, to spear large reef fish and harvest lobsters. When he needs a bag of rice, kerosene for his lamps, or batteries for the flashlight, he barters by hanging a mesh bag of live lobsters out on his mooring float. Ross takes them home and drops off the supplies on his next trip out.

At the evening reception prior to the races, I had chatted with a government official, Nidel Lorak. As we watched the canoes parade past with their torches, he told me that some islanders use similar torches to catch flying fish at night along the outer reef. The bony but tasty critters are attracted like moths to a flame. “The men have a net on a long pole, and snap the fish right out of the air,” he said. I expressed amazement at the dexterity and sharpness of eye required. “Yes. It’s not easy. Only the experts can do it.” Like the canoe-building and -sailing, it was another bit of local knowledge and skill that is still being passed down the generations. There may be tuna ships with helicopters anchored in the lagoon and a daily jet landing at the airstrip, but I went home heartened that at least some of the traditions and culture of Oceania live on in these remote islands.

Tom Koppel is a veteran Canadian author and travel writer whose latest book, Mystery Islands: Discovering the Ancient Pacific, can be obtained by writing to koppel@saltspring.com. 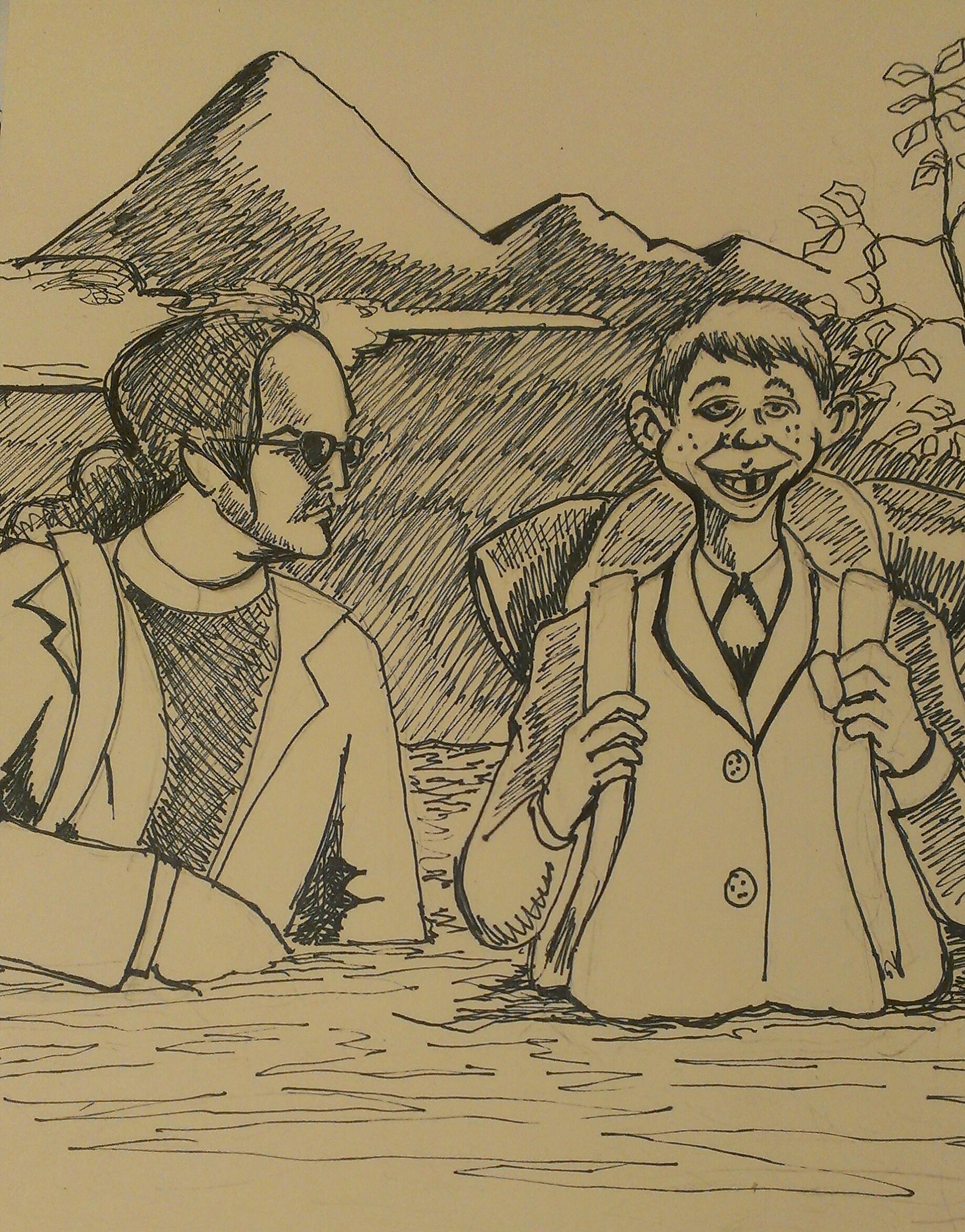 A hip-hop guide to the world’s best music cities