That was one response I got when campaigning for mates for a high altitude hike in the Nepal Himalayas over the New Year in mid-winter. The master plan was to fly to Lukla and trek up Gokyo Ri on 1 January 2014 to witness what is widely acclaimed as the best view of the Everest Himalayas that money (and hard hiking) can buy. Come hiking time and many friends quickly develop cold feet (pun intended). Its either Dad or Mom or the in laws are visiting for Xmas or I just had a baby or my Wife won’t let me.

So I went solo, as usual.

In Kathmandu all flights to Lukla (aka the World’s Most Dangerous Airport) had been cancelled for the past three days due to high winds. But lo and behold there was a chopper pilot who was only happy to fleece us for a princely sum to land us in Lukla and I along with five others hopped on the Eurocopter. The Lukla runway is only 460 m long and resembles the deck of an aircraft carrier so no chance of a go–around and there are mountains immediately at one end and a sharp, 1,000 ft drop into a valley at the other. The chopper landing was smooth but I would dread landing in a fixed wing machine. A memorable moment on 26 December en route to Namche Bazar; my Guide shouted “Look” and there, between a tiny break in the trees were Everest and Lhotse, both dressed in black with a lacing of white snow. My first glimpse of the Queen! I was standing at 3,100 metres and these giants were both 8,500m + but It seemed unbelievable that they were five kilometers higher….

I had visions of Namche as a bustling frontier town, edgy and exotic, much like Peshawar. This was incorrect; it was quiet and largely empty with the odd sharp horned Jopkyo (a half-witted cross between Yak and Cow). I’d flown in sans anything to read so when I sighted a shop with books on climbing and adventure that don’t exist in Dubai I rushed in with ecstatic cries. The museum showcasing a traditional Sherpa home was yawningly boring but the Everest center was worth the $ 1 entry fee.

The path from Namche up revealed a fearsome looking peak. I always bugged my guide as to the name of each peak, whether it was a trekking or climbing peak and (more morbidly) of any disasters. Ama Dablam, this 6,856m peak with a conical head and twin shoulders, dominated the skyline for days after. I kept looking up and thinking what utter madness would fire men to trudge up those steep, slippery slopes. In 2006 an avalanche killed 6 climbers.

It was now getting nippier as we gained altitude with nighttime temperatures dropping sharply. One night at Machermo I kept reading my watch on the window sill at frequent intervals in the night, fascinated by the dropping temperature (in degrees centigrade); 1.7, 0.5, Zero (!!!), -1.5 and a very cold -5.9!). The cold wasn’t a problem when hiking- movement plus the sun kept me warm. The issue was when the sun vanished behind the mountains very early (around 330pm) and then till sunrise it was unrelenting cold and for someone born in India, raised in Nigeria and living in Dubai it was pure misery. My sleeping gear rapidly rose to 6 layers- thermal underwear, fleece jacket, down jacket, fleece liner, sleeping bag and blanket.

The path from Lukla to Machermo was lovely as there were frequent swathes of trail below or on the tree line. The forests were thick with Pine, Birch and Rhododendron and the latter had shed their leaves in the winter and the ground underfoot crunched with fallen leaves. I saw weird sights- frozen water falls, frozen streams, icicles by the dusty roadside. Once I saw the pug marks of a Snow Leopard and late that night it was a wary Hiker who tiptoed out for a leak in Dhole, fearful of an imaginary man eater lurking and ready to pounce, much like Calvin and Hobbes.

The walk to Gokyo Village was the toughest, with steep uphills. With an average altitude of 4,500 metres, the air was thinner. I slowed down but the landscape was the most spectacular yet with the huge white mass of Cho Oyu (8,202m) dominating the horizon under a sky of perfectly clear blue. We soon reached the Gokyo Lakes, the world’s highest freshwater lake system. The lakes are considered sacred by Hindus and Buddhists and there is a strict rule that wildlife in the area should not be harmed. But the Ducks looked plump and either the locals must be very good at self-control or someone occasionally has Spicy Duck Curry on the sly. The frozen lakes and the surrounding mountains set the stage for a light show like no other. At mid-day this was a visual delight, a kaleidoscope of many shades of grey, blue, white, black and brown and as the sun set the landscape was transformed into a world dominated by the most transcendental bluish white.

It was 31 December 2013. The lodge here was the best, with a very convivial atmosphere and many hikers, guides and porters sitting by the warm stove. Tenzing, the young, amiable Inn Keeper, served Yak Sizzlers (though rumors later surfaced that it was Buffalo) with fries, buns and Apple Pie. There was talk of a midnight party. There was also the chance to trek up Gokyo Ri before dawn and witness the sunrise over the Himalayas.

O the Agony of Choice!

So at 0355 HRs, in the dark, I started up Gokyo Ri with my Sherpa. This was the mother of all steep walks and at about 0700 HRS I reached the narrow summit, festooned with prayer flags.

The winter sun was rising. It was a bright, cloudless sky and an incredible panorama slowly revealed itself- Everest (8,848m), Nuptse (7,861m) , Lhotse (8,516m), Lhotse Shar (8,383m), Makalu (8,463m), a frozen lake and the vast, rubble strewn Ngozumpa glacier, the longest in the Himalayas. I stood in awe for long, staring at these with mixed feelings- of indestructible Nature, of mortality, of achievement and a tinge of sadness that perhaps this was the closest I would ever come to these Giants.

As I slowly made my way down to the Village fragments of 8th century Chinese poet Li Po’s poem flitted through my mind:

“All the birds have flown up and gone;
A lonely cloud floats leisurely by.
We never tire of looking at each other –
Only the mountain and I” 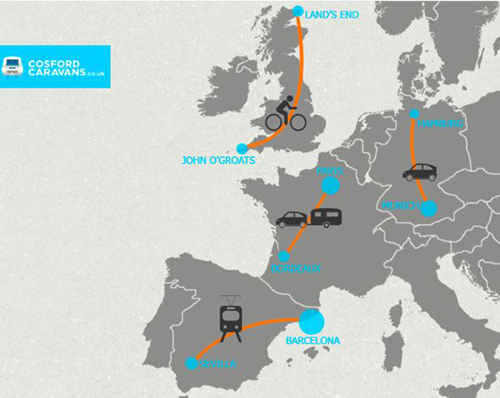 The best – and cheapest – ways to ‘do’ Europe