The first thing I noticed on entering the courtyard was a large steam turbine, its axles slightly rusted, housed in a lean-to shelter alongside the boundary wall. This alone suggested that Birr Castle was not the usual Irish stately home. Though it claims to be situated at the geographic centre of Ireland, and indeed has been called Umbilicus Hiberniae, Birr town, in County Offaly, is not the kind of place one arrives at unintentionally. The main roads from Dublin to Galway and Limerick run either side of it, by some miles, so it is more likely to be by-passed by the casual traveller than visited. Nevertheless, it has been designated an Irish Heritage Town, largely as a result of its Georgian architecture.

It was not the town I had come to see, however. My journey had been blighted by heavy rain showers, so I drove past the architecture without looking at it, and into a car park across the road from the castle’s pedestrian entrance. I continued through the courtyard and reception area, stopping only to pick up a map of the grounds, and on into the estate, eager to explore it while the sun shone. I followed a meandering footpath past the castle itself and across a lawn to reach my main objective, the astronomical telescope known in its day as Leviathan.

Birr Castle has been the home of the Parsons family, Earls of Rosse, since 1620, the present structure standing on the site of a 12th century Norman castle. In the 1840s, William Parsons, the 3rd Earl, built the reflecting telescope which, with a mirror diameter of six feet, remained the largest in the world until well into the 20th century. Astronomers from many countries came to Birr to use the instrument, which gave more detailed views of the Universe than hitherto. The most notable early discovery was of the spiral nature of the Whirlpool and other galaxies, which previously had been seen only as fuzzy patches among the stars. By 1914, the telescope had fallen into disrepair. The mirror was moved to the Science Museum in London, while many of the metal parts were sacrificed to the war effort. Only the support walls and minor parts were left. By the late 1990s, renewed interest led to plans for its reconstruction, not an easy task, as the original designs had been lost. The 3rd Earl’s wife, Mary, was an enthusiastic pioneer in photography, and took many images of Leviathan, and these were referred to during the reconstruction of the telescope, which took place from 1996 to 1997.

Moving back toward the castle, now occupied by the 7th Earl and closed to the public, I passed dense beds of flowers which, though beginning to fade, retained much of their summer colours. Steps led down to the bank of the River Camcor, which was crossed by a wrought iron suspension bridge that dated from 1820, making it the oldest such in Ireland. Upstream of this, water ran over a wear to power a hydro-electricity generator that operated for 70 years until 1950.

I followed the river downstream through an avenue of gnarled yews, willows, sycamores, ash, birch and ivy-covered oaks, many with branches trailing into the water and leaves that were beginning to yellow and drop onto the path. The sluggish river bubbled over rocky shallows to create the illusion of speed. A few spots of rain fell, then sunlight again dappled the footpath.

I continued past an artificial lake and across a series of bridges on either side of the confluence of the Camcor and Little Brosna rivers. A maze of tracks wound through woodlands, passing a small well, its walls decorated with seashells, and into a formal walled garden. The box hedges here, 300 years old, are recorded in the Guinness Book of Records as being the tallest in Ireland, though even they yielded to the sequoia that dominated all views of the garden. Leaving the garden, I sheltered from a heavy shower among the trees of the Whirlpool Spiral, a plantation created to commemorate the 150th anniversary of the discovery of the galaxy’s structure. The first tree was planted in 1995 by Sir Bernard Lovell of Jodrell Bank radio telescope. The spiral of limes is set to scale, such that each step I took through it represented a trillion trillion miles through the galaxy itself.

Returning to the reception area, I entered the impressive Science Centre, designed to celebrate the achievements of the Parsons family and their associates. There are biographies of the 3rd Earl and his wife and photographs of many of the pioneering scientists who worked with them. A gallery is devoted to the photography of Lady Rosse and contains what may well be the world’s oldest surviving darkroom.

Many of the exhibits deal with the astronomical discoveries made at Birr, and there are display cases containing telescopes, spectroscopes, sextants and sundials as well as priceless notebooks recording discoveries and drawings of nebulae and published scientific papers. There is also a working mechanical model of the Solar System.

Developments in astronomy and photography are not the only achievements of the family. Which brings me back to the turbine I saw in the courtyard, and on to the final gallery in the Science Centre. This marks the invention, in 1884, of the steam turbine by Charles Parsons, the youngest son of the 3rd Earl and Lady Mary. He went on to manufacture these in the factory he built five years later in Newcastle upon Tyne, England. Many of these, and others of the same design, are in use today in power stations, both conventional and nuclear, generating the electricity that is indispensable throughout the modern world. 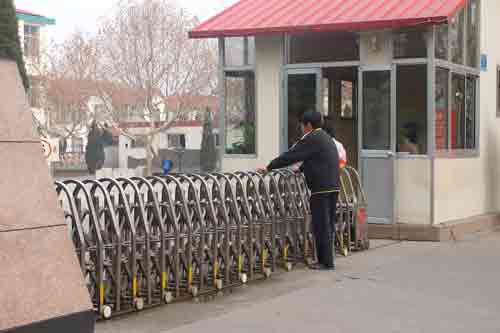 In at the deep end when TEFLing in China

Fine food and wine when house-sitting in France