1:00 am. There are many God-awful things that I’ve come to tolerate on this boat, but getting up at all hours of the night to pedal for three hours will never be one of them.

4:00 am. Just finished first graveyard shift – a real killer. Like motorway driving at night when you’re dog-tired, except worse. Head slumping forward every few minutes, then whipping back and smacking against the stern window. (Journal entry)

Long-term fatigue, or Creeping Grey Funk as we called it, became an evil thing lurking in the shadowy recesses of our sleep-deprived minds, waiting to crawl in and feed as exhaustion grew. Slowly, imperceptibly, it wound its way like a parasite into every aspect of our lives, lessening our ability to execute tasks safely, and stealing even the tiniest scrap of pleasure from things we once enjoyed, like reading a book, or cooking a meal. The rigid shift system was becoming a doubleedged sword. The same discipline that kept the pedals turning 24/7, and the boat from drifting off course, allowed for only three hours of sleep at a time, and never more than five in any 24-hour period. After a fortnight of this, we were turning into the living dead.

Steve suggested we break up the hamster routine by doing a little fishing. On Madeira, we’d been befriended by Heinz, a boozy old salt with ivory beard and bushy eyebrows. A former Uboat commander, Heinz made it his business to show up every morning and pick holes in our preparations for the big crossing. The other annoying habit he had was to bang on about fishing. “Vat are you doingk for zer fees?” he asked for the umpteenth time on the penultimate morning of departure.

Our response was always the same: “We’re not going to bother Heinz. We have all the food we need.” On any other morning, he would chant this as a mantra until we either found a way of getting rid of the old bastard or fleeing ourselves. Today, however, he reached into his jacket pocket, and pulled out a roll of stout marlin line and a thumb-sized lure carved from wood. Furnished with eye-catching tassels at one end, it was, according to Heinz, “Guaranteed to catch more fees zan you know vot to do viz!”

We’d been trolling Lolita the Lure (so nicknamed) for an hour a day since leaving Madeira, and caught not a damn thing. The result of each day’s effort was so predictable it had become a running joke. “You hungry?” Steve would ask, pulling in the line. “Let’s see what Lolita has caught us for dinner tonight shall we?”

Something had to change. Lolita needed a makeover.

Using red and black felt-tip pens, I gave Lolita a pair of exotic Cleopatra eyes and sassy smile. Provocatively curled Betty Boop eyelashes completed the picture of sex appeal – although, as Steve pointed out, the idea was to get the fish to swallow the lure, not have sex with it. Whatever. Within a minute of throwing out the all-new pimped-out Lolita, the line strained to its limit, and a huge dorado fish soared into the air twenty yards astern. All hell immediately broke loose. The inside of the boat erupted into a melee of shouting, swearing, and shrieks of delight as we pulled the gasping beast alongside. The challenge was now to land the thing without it flipping off the hook. Retrieving the old sail bag we’d used to store our Madeiran veggies, I jumped into the water.

My plan was to scoop the fish into the bag, which Steve could then haul aboard. The fish, not surprisingly, had other ideas. As soon as it saw me, it shot under the boat, and started winding itself plus the monofilament line round and round the propeller.

Events then took an unexpected turn. What started out as a harmless bit of fun spiralled rapidly out of control…

The sail bag had slipped from my fingers during the confusion, and was slowly drifting upwind. Or, to be precise, the bag remained stationary in the water while Moksha and I were blown downwind. I started to swim towards the bag. “I’ll just go and grab it,” I yelled. “You sure it’s worth it?” Steve shouted after me.

I pretended not to hear, and kept swimming. Damn Steve, I thought irritably, being a safety officer as usual. After all, the bag was only a few feet away.

But by the time I reached it, Moksha was already sixty feet downwind, pushed by the wind and the waves.

On the long slog back, swimming breaststroke with the bag around my neck, I tired easily. With our legs doing all the pedalling, our upper bodies had lost what little conditioning they’d had on land. A wave broke suddenly from behind, filling my nose and throat with saltwater. I stopped to cough out the brine, losing valuable seconds as I trod water. When I resumed my stroke, I looked up and saw the boat even farther downwind. This was alarming. Moksha was drifting faster than I could swim.

There’s nothing for it. Steve will have to come back and get me… He was sitting on the stern, anxiously watching my progress. Somehow he’d managed to retrieve the fish from the water and had it clasped tight to his chest. Now I’d have to suffer the ignominy of hearing him say, “I told you so!”

His mouth opened and closed, but the words were taken by the wind. I was about to call out again when my throat froze with the terrible realization.

The fishing line… fouled around the propeller…

In the time it took for him to rummage in the stern compartment for a mask and a knife, go overboard and cut the tangle free, then clamber back in and turn Moksha around, we’d be completely separated.

Shit! I’ll have to make it back myself, or…

I remembered the story my father once told me of how, as a boy, he’d nearly drowned off the beach at West Bay in Dorset. After the initial frantic struggle, he described the sensation as being almost pleasurable, “like falling into a trance.” My grandfather, watching from shore, ran in and dragged him out just in time.

Another surprise wave broke from behind, flooding my lungs a second time. As I fought for air, what I took to be the same woozy sensation began spreading throughout my body. Blood was thumping against my eardrums. Nothing seemed to matter anymore. Like the near miss with the trawler, that interface between light and dark, life and death, seemed perfectly normal, as if this was the way it was meant to be.

My arms grew steadily weaker, and my stroke more erratic. I should have known hypoxia was kicking in when the sky turned the colour of red wine and the water around me black ink, as though saturated with blood. From the dying dorado, I thought deliriously. Sharks sprang to mind. The smell of blood will attract them, whip them into a feeding frenzy…

At that moment, something tripped in my consciousness. While the idea of drowning seemed tolerable, almost pleasant, being eaten alive by sharks most certainly did not. The soporific state of quiet surrender vanished, replaced by a primal urge to live welling up from the innermost depths of my being. And with it came reality hurtling back into sharp focus.

I began swimming for my life. My arms were screaming, but I knew that keeping sight of Steve between the towering crests was the only hope I had. Waves were breaking from behind, one after the other. Frothy sputum whipped from the crests, blurring my vision. Moksha slowly slipped from view. As the seconds turned into minutes, I no longer knew whether I was making progress, or even heading in the right direction. The only thing that kept my spent arms turning was the certainty that sharks were closing in. Any second I would feel razor-sharp teeth tearing into my flesh…

In those final seconds of hopelessness and despair, going on as if for eternity, the fingers of my right hand collided with something solid. I felt my wrist being grabbed – Steve heaving me on deck. When all seemed lost, I imagined a divine hand reaching out and offering me my life back.

Slumped on the stern deck, gasping for breath, my eyes met the gaze of the dying dorado, its silent suffocation all too poignant.

Read more about Jason Lewis and his global adventure by looking at his website or buying ‘Dark Waters‘, or its sequels, ‘The Seed Buried Deep‘ and ‘To The Brink’ (coming soon), all published by BillyFish Books. 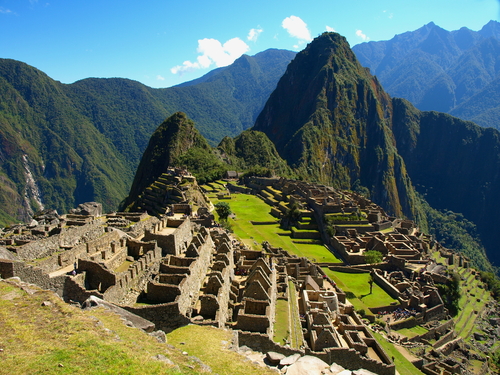 A guided tour of Machu Picchu

Just how stupid can packaged travellers be?