On the way out of town I stopped to refuel as I did every travel day and Turkish hospitality stalled me once again. The station owner’s son had studied at university in Ireland. He insisted I stop for breakfast or at least a ‘cuppa’ and warned me again about driving in the city. ‘You must go around’ he said while offering the sugar bowl.

Everyone was in agreement about my day’s route, me most of all, but when I recognised the Theodosius II Walls I knew I’d made a horrible mistake somewhere. Sat at the lights with the walls on one side and the steely blue of Sea of Marmara, punctuated with its tugs and ferries, I felt like I was perched on top of Niagara Falls in a pedalo; you might survive but you wouldn’t want to stake your life on it. Then the lights snapped red, amber, green. I was off. Dragged along in the torrent and your only hope is to keep flailing your arms and gasping for air. The surge pulled me along the coast and I knew from a previous visit that sooner or later I would reach the Yeşilköy Feneri Lighthouse at which point I was about as fucked as it was possible to be.

Years before, at the end of several months hitching along the Silk Road, I had arrived in Istanbul and instantly fallen for the city. You may want to argue that after months in dusty and oppressive Uzbekistan, Turkmenistan and in particular Iran anywhere would have seemed paradise. I had somehow been persuaded by a befuddled Iranian dentist to be his porter but the instant my penance was complete I collapsed into the nearest café and finally removed months of congealed goat and sheep fat from the roof of my mouth. I had wandered blissfully through the alleyways and palaces, the museums, mosques and mayhem of modern Istanbul in a daze of confusion, fatigue and exhilaration at reaching my goal. A rose tinted memory for sure, but the terror of the braying Turkish drivers haunted me. Valiantly clinging to a Bakelite steering wheel I snatched painfully up and down through the gears. The Austin’s heavy chassis fetched and rolled on its ancient springs seemingly without rhythm as we struggled along Kennedy Caddesi (named after JFK). The horns and revs, crunching gears and squealing brakes rose and fell with the almost imperceptible pulse of a Thelonious Monk improvisation.

Austin was slow off the line and equally sluggish to brake. Attempting the rapid double dip clutch-neutralclutch and into first in an attempt to get the cogs to synchronise while trying to read road signs wasn’t going well. Then it was clutch-neutral-accelerate into second on the way up again. All the while the dissonant Turkish sun hammered down on a fifty year old thermostat as a horse cart pushed in front forcing me to jam my foot hard on the brakes. When my chain of profanities died away I had an instant to realise we were in the serrate shadow of the grand Ottoman Topkapi Palace high above. As soon as we entered Sultanahmet we were in the hands of fate. A split second’s indecision found us funnelled deeper into the mosque and minaret saturated Sultanahmet. We seemed to be on Ishakpasa Caddesi when at a roundabout we turned right and suddenly found ourselves trawling slowly through the congestion between the twin splendours of the Aya Sophie and the Blue Mosque. The traffic was slowing to a walking pace as it drew me slowly past.

In 1967 the crew had been able to park anywhere at the side of the road. In fact to make sure they remembered where they parked they left their Austin right outside the Blue Mosque. There had been only a handful of other cars and these had been almost exclusively large American Buicks making a living as taxis. The occasional Volkswagen or Citroen punctuated this scene but Dad thought it strange how American the place felt.

Like Greece the Americans had been pumping millions into Turkey as their bulwark against the Soviets and the dreaded Reds. In fact the American placement of Jupiter nuclear missiles in Turkey in 1958 had been a key catalyst in the 1962 Cuban Missile Crisis where the belligerent première Nikita Khrushchev and equally bombastic JFK brought the world to the edge of annihilation. After a heated standoff Kennedy relented and secretly removed the Turkish missiles, much to the chagrin of the host nation, while the Russian ships turned back to port. Khrushchev’s public backing down would ultimately cost him his place as the first amongst equals in Moscow while wily JFK met his end a year later in Dallas.

As the traffic sped up I thought I was looking at my last days, but there above, in the afternoon shimmer was the Galata Bridge. It should not have been passing above me. Again I had made a wrong turn. We were now driving north up the Golden Horn coast. Stop, start, stop, start, we pushed on hoping for a turning space before reaching Bulgaria.

After three more attempts, boiled and disoriented, we connected with the rush hour commuters heading home. We crossed the Bosphorus leaving behind Thrace and Europe, we were finally speeding along in the right direction if not the right road. I regretted complaining about the red lights and the arrhythmic pulses of the traffic earlier. Here was a near nonstop torrent of howling traffic hell bent on getting home. If the morning had been the abrupt pauses and hesitations of Monk then the afternoon was the frenzied nonstop cadenza of Art Tatum, and from the skill of the driving the same gift of blindness.

The Turkish Nobel Laureat Orhan Pamuk said in his Istanbul: Memories and the City that ‘the first thing I learned at school was that some people are idiots; the second thing I learned was that some are even worse.’ It seems those people grew up and bought cars and were this evening rushing to get home.

Eyes strained for overtakers to the right and bastardly buses to the left I listened for genuine threats and warnings hidden amongst the purely bolshie and cantankerous rush hour cacophony. Then the rush hour began and it became a mental inundation.

How we got to Kartal, where the original party rested blissfully after their dalliance of spice bazaars and gold souks, was a blur of unrepentant anarchy. Fearing terrible consequence from the rush hour rally I yanked the steering wheel and bounced terrifyingly off the road into a parking space outside the first and only hotel. I think I sat in the car for possibly ten hours waiting for my road rage to dissipate. Placing a brick behind the wheel I staggered into the reception and collapsed into the first room they offered me.

The Escape Committee from Design and Film Cornwall on Vimeo.

The USA’s ‘God’ probably lives in a cornbelt state 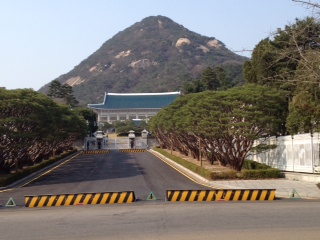 An outbreak of shelling in Korea’s warming war