The next day I have some chores to do. I must find the police station and get a permit to travel east from Aden, through central Yemen and on towards Oman. The route will pass through the ‘dangerous’ region of Hadramout, which – aside from being home to loads of normal people living normal lives – is also where four South Korean tourists were blown up a couple of months ago while posing for a photo in front of some ruins. The region also boasts a history of kidnappings by remote communities, branded with the indignity of the ‘tribal’ label, who, like the Afar, need leverage to get their marginalised needs fulfilled. Build a bridge here – we’ll release these foreign hostages. Pave that road there – we’ll release these foreign hostages.

I produce my passport and tell the police chief I need a permit to travel on roads east of Aden.

‘Yes, that is correct,’ he says, with a sigh, reaching for a drawer in the sweltering little room. It’s more the humidity than the heat – still, oppressive, lethargy-inducing, bringing a permanent sheen of sweat to the skin. The slightest breeze tickles the body like a wave of purest pleasure, whatever the source – ceiling fans, open car windows, the brisk brushing past of a pedestrian – cruel instants of respite from the maddeningly hot, moist, invisible, salty fog that lies across the land.

And he shrugs. The message is clear: Nobody knows, so keep your fingers crossed. Things can and do change overnight here. But he’s giving me the permit, so the risk can’t be all that great – can it? I cycle east out of Aden, savouring every breath of breeze that the act of cycling generates. Thick air lies across the coast like a blanket, and I ride as if pushing through hot, invisible mist. My clothes are soon soaked. Stopping for a break, I find that it is possible to wring pools of water out of the sleeves of my shirt.

I’d discarded the ragged remains of my trousers in Aden and bought instead a futa, a traditional wraparound garment, tucked into itself and fastened with a belt, rather like a long kilt, albeit with the distinctive patterning of the Orient. It is clear why Yemeni men still wear this: in this climate, only the kind of full and easy access allowed by such loose folds of fabric can keep one’s nethers adequately ventilated. I soon learn the knack of arranging my futa to take full advantage of the oncoming breeze, yet at the same time avoiding undue alarm when encountering passers-by.

Arriving at a checkpoint a few hours’ ride along the coastal road, I brandish my permit with a confident smile. This, I have heard, is as far as travellers in Yemen have been allowed in recent years. The province of Hadramout lies ahead, Yemen’s tribal heartland, and too many politically motivated kidnappings have taken place in Hadramout for the security forces to risk allowing another vulnerable foreigner alone upon its roads. I brace myself for the order to turn around; for my ride towards Dubai and Iran to be stalled. And I am taken by surprise when the guards wave me casually through. I cannot quite believe it: they are allowing me to continue!

And so I ride on, into the empty coastal dunes of Yemen. I had not quite been prepared for this, and I realise that my supplies for the road ahead have been ill thought out. I’m not even sure how far I’ll have to ride before the next town! It shouldn’t matter – there’s a steady stream of traffic, should I run out of the essentials. But I can’t help wondering why I hadn’t taken provisioning as seriously as I usually would. A few miles later I spot a pick-up truck on the side of the road in the distance. As the shape grows more distinct, I notice something mounted to its roof. By the time I have realised that the ‘something’ is an enormous machine-gun, half a dozen men in camouflaged overalls have sprung from the truck and are marching towards me. They are all carrying the world’s most popular firearm: the AK-47.

I roll to a halt a couple of dozen yards away, quickly dismounting. Then I wheel my bike towards the oncoming men. They are already reaching for my bicycle. And I already know what is going to happen.

My bicycle is being taken away from me. Clumsy, careless hands are dragging it onto the back of the truck. The pedals are clanging against the tailgate; the chain falling off, sagging; a pannier crushed mercilessly as the bike is wedged between the men who are now resuming their positions on the benches; I am already checking off its contents in my head, noting what is likely to be damaged; then I am ushered round to the passenger door of the pick-up and offered the seat between the driver and his buddy. I ask to be allowed to take my handlebar bag inside, with my passport and wallet and video camera, and the hidden pendant of St Christopher that my mum gave me. And the soldiers of the Yemeni military – my personal bodyguards for the road through Hadramout – are happy to oblige.

As we speed through the empty wasteland, windows down and engine roaring, sand and rock and scrub flying past on either side, hazy mountains on the northern horizon and the flickering blue of the Indian Ocean on the south, I begin to see what was really sabotaging my single-minded pedalling routine. I had not paid due attention to the prospect of cycling the full length of Yemen for one simple reason: I didn’t truly want to. A protest had been playing out in my head as I’d realised that the security forces were about to snatch me from the road, but the bigger part of me had felt relief, not annoyance, that my ride was going to be shortened by several hundred miles. Something is dragging me towards the prospect of seeing Tenny, now, and in this tug-of-war that I sense happening within myself, the opposing pull of my much-dreamed-of life on the road is beginning to lose the fight. There are greater forces at work here, and I am being dragged faster than I am able to ride.

By the time the day draws to a close we have journeyed half the length of the nation’s coastline to a soundtrack of crooning Arabic pop. Each soldier has had his turn at manning the machine-gun, and at wearing my sunglasses whilst doing so, and there hasn’t been cause to employ the weapon; indeed the driver seems to know personally the men who raise the barriers for us on the way into and out of each small town along this road. I suppose that security here relies on friendships and allegiances, rather than on some prim and proper notion of law and order, and I guess that there is in fact some merit in having these soldiers along: it is the calming influence of the known and trusted, rather than the brash threat of a firefight, that is keeping me safe.

The villagers of Bir Ali suggest that we camp for the night upon a nearby beach. Arriving at sunset, there is nobody to be seen, just a scattering of ramshackle huts and a few sun-bleached wooden deck chairs that look to have been thrown together in a hurry and forgotten. There is an air of abandonment here, as if this was once a popular local tourist destination, before the economy began to collapse and the region fell again into unrest. And I realise that this place has all the makings of a paradise on Earth. The sun is sinking behind the inland hilltops in a cloudless sky. Turquoise shallows extend out into a sheltered lagoon, warm and clear and calm. The sand is as pale and smooth as the fairest skin. It is every bit the archetypal beach towards which Alex Garland had Richard and his fellow backpackers questing. And, just as in that story, it seems that such surroundings are soon overshadowed by more human concerns.

Extracted from Tom’s excellent book Janapar: love on a bike. This vivid account of a long-distance bikeride has also been made into a film. Buy both or just check out his website for some travel inspiration.

Arsenic, celebs and tax evasion in a small Italian town 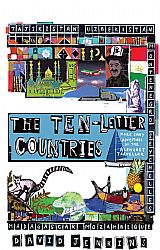 The unexpected pleasures of hiking in Kyrgystan