Now that the bike was mine, there was nothing else to do but take the bull by the balls and start riding. The pathetic notion of blaming jet lag and saying I’d pick her up tomorrow prodded my tired brain, then was rapidly admonished by my braver self. I had to start somewhere. Tucking my bike in behind Digby’s, we dived into the mass of vehicles, the buzz of my little Cub’s engine swallowed by the throaty chug of his single-cylinder Minsk.

Cast aside those western notions of traffic, where cars queue with bovine patience and bicycles glide down neatly painted lanes. The chaotic, raging torrent that barges its way through Hanoi’s narrow streets is a wholly different beast. This is traffic red in tooth and claw; a seething, surging, clamorous cavalcade of man and metal. Lissom girls weave through the melee on Honda mopeds, their faces and arms covered from the sun, high heels teetering on running boards. Taxis career in all directions, horns blasting. Girls riding large old-fashioned bicycles wobble insouciantly between the lanes, pedalling gracefully at the same unhurried speed. With their conical hats and flowing black hair, they seem to float rather than pedal, oblivious to the hooting machines that flow around them. Women in their traditional non la, palm leaf, hats stagger under back-breaking yokes of fruit and vegetables. Mopeds loaded with whole families, pigs, cupboards, washing machines and beds squeeze through non-existent gaps. And through the middle of it all pedestrians dash hopefully. It makes Pall Mall in rush hour look like a Cotswold backwater. Scanning the road in eight directions at once I gripped the handlebars, left thumb hovering over the horn, right foot poised above the back brake. In the middle of a busy any-way-you-fancy junction I swerved to avoid a family of four, who stopped their moped to disgorge two children into the fray. Apparently, looking in the wing mirror or pulling over to the side of the road before doing so was unnecessary. In England such driving would have people taking your number plate and dialling 999. Here it was perfectly normal.

Despite the insanity of it all, I felt a smile spreading across my face. Fingers of excitement crept up my spine, throwing aside lingering nerves. I was here, in Hanoi, united at last with my bike; my Ho Chi Mission finally in the starting blocks.

Chickenchaser, Clunk, Super Clunk, Cub, Super Cub, step through – mention these words to bikers of a certain age and they’ll go misty-eyed, as though remembering a first date. They might ride BMWs and Ducatis now, but once upon a time they learnt to do wheelies and strip an engine on a humble Honda Cub.

With just three gears, an automatic clutch and an engine the size of a watermelon, Cubs are (almost) idiot proof and (supposedly) indestructible. Designed by Soichiro Honda as the answer to post-war Japan’s need for an inexpensive mode of transport, the Cub was an instant success. Since production started in 1958, over sixty million have been sold in fifteen different countries. James May, writing about the experience of riding his in Vietnam, described them as ‘a best-seller to make other best-sellers look like mere fads… the greatest machine of all time; nay, the single most influential product of humankind’s creativity.’

OK, so he might have been a little hyperbole-happy there, but there’s no getting away from the fact that the Honda Cub is the single most produced machine ever made. Yes, you read right, the single most produced machine ever made. Immortalised as a ‘groovy little motorbike’ by California rockers The Beach Boys in their 1964 song Little Honda, in 2006 the Discovery Channel voted it the Greatest Motorcycle Ever Made. To prove the point, the programme’s presenter Charley Boorman attempted to batter a Cub to death. The poor little beast was thrown from the roof of a building, loaded with 200 kg of pizzas and filled with cooking oil, but it refused to die.

Their brilliance wasn’t new to me. A few years previously Marley and I had bought two Cubs on eBay for £300 each, painted them in animal print livery and ridden three thousand miles around the Black Sea. In three punishing, stormy weeks neither bike had put a piston wrong. Even when I’d omitted to put oil in my engine, Soichiro’s marvellous machine had clunked on, drier than the Skeleton Coast. It wasn’t until Trabzon, in the far east of Turkey, that Marley noticed my error. If it had been any other bike, I’d have been getting the train back to Istanbul. There were other reasons behind my choice of vehicle. Firstly, I was a novice when it came to mechanics. It wasn’t that I couldn’t do it, it was just that I’d never applied myself to learning about the inner workings of an engine. In all my previous travels there had always been someone else to do that bit. My role had been filming, passing the odd spanner or sitting on the kerb smoking and offering verbal support. Marley had taught me some basics before I left home, such as how to tighten the brakes and chain, but – despite Digby’s confidence and my desire to learn – there might be times when I needed help. Cubs are simple machines to fix and, where I was going, most boys over the age of ten knew how to bash one back into shape. The same couldn’t be said for a new-fangled BMW tourer.

Secondly, my route would pass through some of the poorest parts of Southeast Asia; mountainous tribal lands where the sight of a foreigner was still an extreme rarity. Some of the people still lived in near Stone Age conditions; in bamboo villages absent of schools, sanitation, electricity or material wealth. Me with my white face and motorbike gear were going to be enough of a shock. I hoped that riding a cheap, familiar bike might fractionally lessen the cultural chasm between us. And finally, doing it on a proper dirt bike seemed too easy. There was infinitely more comedy value in attempting to trundle up and over the Truong Son range on a twenty-five year-old pink Honda Cub.

Extracted from Antonia’s very excellent new book, A Short Ride in the Jungle. Buy it here. 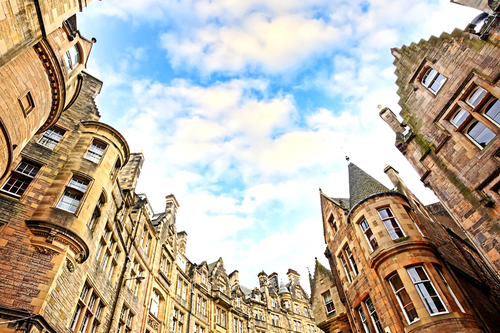 Into Edinburgh on a Gothic winter day

In Palestine’s West Bank, even when peaceful, life is no fun at all