Back in the good old days before the Spaniards came along and ruined the party, the Aztecs were running around having a wow of a time singing, dancing, eating each other and welcoming their inevitable end as a daily routine. They embraced death as a continuum of life and celebrated it’s existence during Dia de los Muertos, Day of the Dead, by enticing the souls of the deceased back to the land of the living to enjoy life one more time.

When the Spanish conquistadores illegally parked on the land, shouted out “MINE” and sent forth the missionaries to save the heathen souls, Aztec ritual was mashed up with Catholicism like some bad Pet Shop Boy’s re-mix and Dia de los Muertos was slapped with a PG rating. Out went the cannibalism and human sacrifice, in came the tequila shots.

Modern day Dia de los Muertos celebrates death as a part of the human experience, that every human being, no matter how beautiful, rich, poor or well-dressed, will eventually become nothing more than bones. This can be seen in the familiar symbol of Dia de los Muertos, the calacas and calaveras or skeletons and skulls, which appear in everything from candy, paper mache sculptures and the popular half decorated face painting, one side depicting life as it is and the other an eery art work of grey and white bones under dark shaded eyes, recognizing this duality.

While it seems a little harsh to celebrate your deceased by running around with your face painted like a nut bag, such apparitions can be traced back to Aztec lore.

Mictlantecuhtli, in Aztec mythology, was a god of the dead and the king of Mictlan otherwise know as the underworld. He, like most good men, took on a wife who’s name is also outrageously hard to pronounce and suspiciously similar, Mictecacihuatl, who was appointed Queen of the Dead. Her punishment for marrying someone with a name as awful as hers was to preside over the bones of the dead for safe keeping, but on the plus side, she became the party ambassador for The Day of The Dead. Depicted in pre-Hispanic artifacts with a “de-fleshed” body, hence Dia de los Muertos having such an affinity with skulls and skeletons.

The crown of creepy skeleton lady was handed over in the 19th century when an engraver by the name of José Guadalupe Posada used the Aztec legend to poke fun at Mexican society at the time and explore the theme of death as the ‘ultimate leveller’. In his most famous engravings he depicts skeletal figures happily going about everyday life, working, dancing, making out, drinking and having a general merry time. His La Calavera Catrina, a female skeleton adorned with an outrageously oversized flower-covered hat has now famously become the cover girl for Dia de los Muertos, partly because we can all actually say her name.

By the late 20th century in most regions of Mexico, the practices had evolved to honor children and infants that had died as well as adults. November 1st is referred to as Día de los Inocentes, Day of The Innocents and also as Día de los Angelitos Day of the Little Angels. November 2nd is the start of , Day of the Dead. Families will devote a day to cleaning the graves, decorating them with candles and flores del muerto (flowers of the dead which happen to be marigolds) to help the spirits find their way home and to make them welcome. On Dia de los Inocentes toys the children once loved are placed on the graves and women will spend all day cooking for the deceased and the customary feast in which friends and family gather to toast the arrival of the lost souls. Come Dia de los Muertos, ofrendas (alters) are erected and lavishly piled high with offerings to the departed souls that they would have enjoyed in life including flowers, candles, tamales (steam-cooked cornmeal dough) and tobacco. Water is placed on the ofrendas as the spirits arrive thirsty after their journey and pan de muertos (bread of the dead) which is made with egg yolks, fruits and tequila (oh bless) and is, of course, shaped like skeletons and skulls.

The event climaxes with a visit to the cemetery. Music, singing and a general festive atmosphere follow families as they gather in groups and cheerfully make their way to the gravesite under the dim light of swinging lanterns. Small children with calacas faces play chasey around the headstones, their laughter encouraged to wake the dead and bring them back from their eternal roaming in Mictlan. Families will gather around the deceased’s final resting site, often laying out a picnic like we would on a hot summers day down the beach.

Traditional Mariachi bands wander around the cemetery offering their musical talents to woo and charm the dead for a small fee as relatives raise their glasses to the ghoulish guests of honour during an all night vigil.

In our Western world death is a touchy subject as we mourn those that pass and shed tears in their absence. We wear black and walk around in silence in stark contrast to the senors and senoritas who flaunt vivid greens and sun yellow costumes, singing and dancing in the face of the ultimate human demise. All this enamored treatment of immortality might be a little too much for the straight-lined, both fascinating and morbid in its approach but wouldn’t it be cool if we had a three day party instead? Where we drink heaps of tequila, paint our faces, and hang out in cemeteries? I think so, and so do a whole lot of Mexicans who are way ahead of the time and already celebrating the inevitable. During the last week of October and the first week of November Aguascalientes, a town five hours Northwest of Mexico City, could quite literally be crowned the dead centre of all things Dia de los Muertos. Beginning as a homage to the creator of the Catrina, José Guadalupe Posada (that engraver guy) who was born there, the Festival de las Calaveras or Festival of the Skulls will tantalize with numerous musical performances, theater plays, art and design exhibitions, culinary tastings and a myriad of other celebrations of all things buried. Be there for the crowning event of the festival, the skeletons’ street parade.

A quick side trip in Aguascalientes to The Museum of the Dead should give a little more insight into the way things work during Dia de los Muertos and make sure you’re not walking around in a state of gringo ignorance.

Rolling out the sleeping bag in the cemetery will not gain you any friends, no matter how much you think you’re getting into the “spirit” of things. So get your rock star on instead and crash at the Aguascalientes Marriot Hotel with prices starting at $166 per person per night. If you want to save your peso’s for duty free tequila, then check out the Ibis Aguascalientes where a double room will set you back a whopping $48 per person. 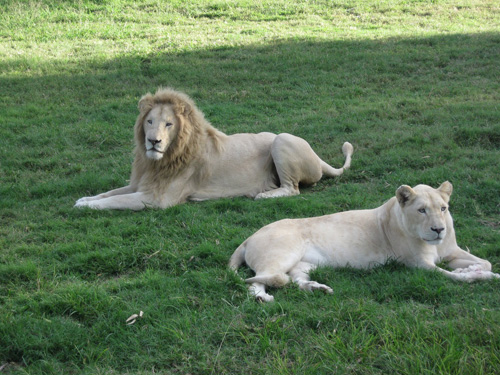 A day out with Johannesburg’s white lions