Before heading off this past June to British Columbia, Canada, I had never heard the term “First Nations.” I had grown up with the labels of Indians and Native Americans. A visit to the Museum of Anthropology in Vancouver set me straight. And it also provided the perfect introduction for adopting an appreciation for this culture that I would then try to bring to life as I travelled in Vancouver, Squamish, and Whistler.

Early European explorers thought they were in India when they landed in North America so they called the original inhabitants “Indians.” Changing their name indicates White Man’s recognition of error. First Nations people identify themselves by the nation to which they belong, for example, Mohawk, Cree, Oneida, or Squamish. There are 617 First Nations communities in Canada. British Columbia has the largest of any province with 198. A visit to Vancouver’s Museum of Anthropology instilled in me a reverence for these people and a desire to vicariously assimilate a bit into their culture as I soaked in the pristine splendor of British Columbia.

No visit to Vancouver would be complete without spending an afternoon at the Museum of Anthropology. The museum is housed in an inspiring glass and concrete building overlooking the cliffs of Wreck Beach, adjacent to the University of British Columbia. Guides share stories of artifacts, cultural genocide imposed by white settlers, and governmental movements to rekindle the languages and ways of First Nations tribes. Giant totems speak of the sturdiness of red cedar and brotherhood with nature. The potlatch beckons all welcomed visitors to enter and warring tribes to stay their distance. Behind the museum sits a replica of a Haida village, easily enticing one’s mind to soar as guides share favorite folklore. But what really did it for me was Bill Reid’s sculpture Raven and The First Men. The raven sits stoically atop a shell, with men prodding themselves out of it to begin life. The eyes of all are closed, as if telling me that life will be an unknown journey. Their expressions symbolize acceptance more than anticipation. One particular fellow has his buttocks facing outward, making me chuckle and wonder if he’ll find his life’s direction. Others clutch on tightly to the shell, as if having second thoughts about leaving its safe confines. I decided to incorporate much of this symbolism, to play at having a bit of the First Nations spirit inside me, as I pushed forward with adventures that would soon be mine a bit north of Vancouver in Squamish and Whistler.

Squamish lies about an hour north of Vancouver. Here, we played “Semi First Nation Water Women” on our two day rafting wilderness expedition with Canadian Outback Rafting Company. We signed in at the Executive Suites Hotel & Resort, far from any hint of a potlatch or camping out experience. Soon, though, this changed. A bus transported us and fellow rafters and crew to the starting point along the edge of the Elaho River. I kept thinking of Graham Young, owner of Canadian Outback. Was he playing the role of Raven the Trickster? According to a Haida myth, Raven is a trickster. He can often be selfish, hungry, and mischievous. He is also Creator, giver of fire and light to the world. So, what did we get ourselves into? Maybe my friend and I were going to be like those emerging from the cockle shell back at the Museum of Anthropology. Would we open our eyes to life’s adventures? Would we face forward or butt forward? Would we wish we never left the safety of the closed shell or would expert guides lead us along a river of beauty and excitement?

The talented team of guides taught us the skills necessary to maneuver through exciting Class 3-4 rapids, including the challenging Devil’s Elbow section. Under the leadership of our guide Ricky, we paddled along some of North America’s most exhilarating rapids and inspiring wilderness of old growth forests, towering glaciers, and stunning waterfalls. Every so often we had to move quickly: right paddle, left paddle, forward paddle, backward paddle. Ricky became to me the First Nations’ Dragonfly. According to their folklore, the dragonfly is a symbol of change, transformation, and swiftness. It is a creature of the wind and the water. He adapts mentally and emotionally, and its swift flight radiates a sense of power and poise.

We continued our journey for a few more miles down the river until we reached our remote wilderness camp area. No, there was no potlatch. But the crew pitched tents for the over-night guests and spread out hors d’oeuvres fit for any pow-wow. Crew member Martijn soon endeared himself to all rafters. He told us stories of round-the-world raft trips and his ease at adapting to other cultures. Again, I felt as if we were with a First Nations’ symbol, this time the Heron. As a water creature, the Heron is an image of going with the flow and working with the elements of Mother Nature rather than struggling against her. Great fun was ours to see this New Zealander become our Heron Friend.

Phil strummed the guitar; Ricky mastered the steak and salmon preparation; and other crew members pitched in as if together they transformed themselves into The Beaver. According to Squamish folklore, The Beaver has a great understanding of nature and working in harmony with surroundings. He is very flexible, working towards goals and gaining a sense of achievement. He has a strong will, is a protector, and creates a strong sense of family.

We slept between the mountains, trees, and glaciers, dreaming of the Squamish tribe that once did the same. In the morning we awoke to the sound of the river, the aroma of freshly brewed coffee, and the crackle of fried bacon. We soon left camp to float down the calm waters of the Squamish River. We now could jump in and swim some rapids, though it was hard to take our gaze away from the old growth forests, glaciers, dormant volcanoes, and waterfalls. Indeed, we had not been deceptively tricked. It had been a wonderful two days of transformation and bonding under the expertise of a Dragonfly, a Heron, and an entire family of Beavers.

Adopting a First Nations’ viewpoint became a fun thing to do for the rest of our trip. While in Whistler, we joined Blake as our guide with Whistler Discovery Tours for bear viewing. We set out in Land Rovers for two and half hours at sunset in the hopes of finding black bears in the nearby Callaghan Valley. We had recently viewed one from a glass bottom Peak 2 Peak gondola ride, but that was at quite a distance and she was on the move. Now, with Discovery Tours, we hoped to get up close – well, not too close. Luck was ours. We spotted a female of about 290 lbs. She was about thirty feet away from us as we hugged the side of the road. She did not care about us; she cared about eating. I had known about Mother Bears and their protection of their cubs. But, we now saw in front of us a 25-30 minute show of Preparation for Motherhood that put any human pre-natal manual to shame. Ma Bear busily smashed logs to splinters to access larvae or insect eggs. She rummaged through grass to spot a bug or two for the gulping. Blake told us that instinctively she knows that she is to consume 20,000 a day to sustain a pregnancy and bring forth life. No wonder she will fight to protect her young; she has worked tirelessly to secure their birth. In Squamish folklore, the Bear symbolizes family and strength. Greatly, I admired our Mom Bear and felt a kinship in sharing this reverence with tribes of the First Nations.

Pristine lakes adorn the Whistler area. Drive north toward Pemberton and stop to hike around glacial lakes, spreading forth like fabric of light green velvet. And in town lies Lost Lake with Alta Lake nearby, both with easy manicured trails. We were glad we visited in June. It reminded us of the Squamish tribe’s sign of The Frog, the symbol of putting away the winter activities and preparing for a new season. Even more so, it brought thoughts of The Eagle, the symbol of grace and power to First Nation culture. Definitely, the extensive beauty of British Columbia epitomizes graceful strength.

All too quickly our week in Whistler came to an end. We drove back to the Vancouver Airport, reflecting over the many activities and sights of our vacation. How could we keep the spirit of the First Nations as our souvenir? As if reading our thoughts, the answer displayed itself in Bill Reid’s sculpture Spirit of Haida Gwaii inside the Vancouver International Airport. In green-colored bronze, the sculpture shows a traditional Haida cedar dugout canoe which totals six meters in length. The canoe carries Raven as the trickster, holding the steering oar: Mouse Woman, crouched under Raven’s tail; Grizzly Bear; Bear Mother; their cubs; Beaver; Dogfish Woman; Eagle; Frog; Wolf; a small human paddler in Haida garb; and the human Shaman who holds a staff carved with Seabear, Raven, and Killer whale. The variety and interdependence of the canoe’s occupants represents the natural environment. To survive, the First Nation people relied on diversity and dependence on one another. All in life is not harmony. After all, Raven, the cunning trickster, holds the steering oar and symbolizes nature’s unpredictability. But perhaps unpredictability can give pleasant surprises and avenues for growth. Nevertheless, it sure helps to have an awesome gathering of Dragonfly, Heron, Beaver, Bear, Frog, and Eagle to reinforce the memories and lessons we gained in Canada’s British Columbia. 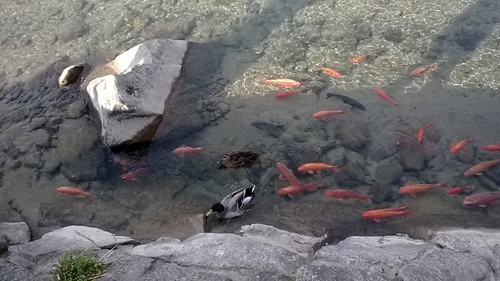 Meandering through Mexico and Central America