Panama is a country of marked diversity, a paradox if ever there was one. If you travel to Panama, you are bound to see its capital city’s splashes of economic prosperity. From the 66th floor of its Trump Tower where a blackjack game can set you back $200 to a stroll along an oceanfront boulevard to a visit to the $5.2 billion expansion of the Panama Canal, you will easily note that much of Panama is thriving. Venturing away from the capital, abundant adrenaline-rush activities beckon. Snorkeling, scuba diving, fishing, white water river rafting, zip lining, surfing, and horseback riding: these are merely a few. Definitely, the country can hold its own against its northern neighbor, Costa Rica, and generally for less dinero. However, one should also view the other face of Panama to come to know this country. This other face reflects a country where nearly one-third of Panamanians live in poverty. Among the indigenous population, poverty rates are even higher. Recent documents declare that more than 80.5% of Panama’s indigenous peoples live below the poverty line, and about 51.9 % are extremely poor. Adding fuel to this alarming statistic, the indigenous peoples are also the most rapidly growing segment of the population, with an average growth rate that is more than double that of the country average. On my recent trip to Panama, I did not see the country’s government greatly helping out the indigenous peoples; I did see a non-profit organization, established by a Gringo from San Diego, California, pick up the slack. It is a slack very notable, and Give and Surf passionately devotes itself to bettering the lives of the Ngobe people in the Bocas del Toro area. In October, I spent fifteen days volunteering with Give and Surf. This non-profit organization provides pre-school for the children of indigenous villages in Bocas del Toro; English instruction for the school-aged children and adults; boat transportation money for the junior high and high school students to travel to Bocas to attend the public school; and, dare I forget to mention, surf lessons and boards for both the Ngobe youth and the volunteers. Volunteering was hard work, harder than I thought it would be. Nonetheless, it was memorable. I have come to realize that usually the most memorable events in life are the ones with challenges attached. I assisted with the daily pre-school activities of approximately 25 children aged three to five. That might sound like a piece of cake, especially for a retired school teacher, but it was far from easy.

Educating the Ngobe children has its challenges. I was the only volunteer for the first week of my stay. Another volunteer joined us for the second week. We stayed at the volunteer house with Melissa, the teacher from Peru, and Drew, the volunteer coordinator and boat driver from Maryland. Both are in their mid-twenties and have dedication and passion unparalleled to most post-college youth of today. The volunteer house is not the best of accommodations. Truly, it is one step up from camping so it is a better fit for high school and college volunteers than grandmas. Going without WiFi was okay, even rather a relief, but having clogged shower drains, only one electrical outlet to share between all of us, poor ventilation, and a broken refrigerator provided challenges I wasn’t quite ready to accept. For others, I would definitely recommend volunteering with Give and Surf but if you’re past thirty, I would opt to splurge and stay at La Loma Jungle Lodge or have easy access to many activities and stay in
Old Bank at either Tio Tom’s Guesthouse or Bubba’s House.

Our typical day began around 8:30. We would leave the Volunteer House, waving good-bye to the pet sloth that remained in a neighboring tree branch, and hop into the water taxi. With Drew as the driver, we would go from dock to dock to pick up the children and an assistant teacher for the morning’s pre-school. Most of the barefoot children were at dock side, waiting eagerly to hop aboard the boat and begin their day. For the few who lingered a bit, Melissa would yell out, “Escuelita,” and they would come running from their homes to join us. Usually three and four year olds walked by themselves down to the docks. Some would have a mom, grandma, or sibling accompany them, but the children felt very comfortable and confident being at the “boat stop” to go to school. We would reach the one-room school constructed by Give and Surf volunteers and villagers around 9:15. The kids and adults would pile out, ready to begin the morning’s schedule.

The daily activities, at least in part, seem rather the same as a typical pre-school in other parts of the world. We began the morning with a couple of songs, both in Spanish and in English. We would learn a few English words, this month’s themes being shapes and toys. We would gather for reading time and art projects. Often we had recess and always time for snacks. Daily, we had time for brushing the children’s teeth. They loved it as a novelty, something not done in their homes. Definitely, challenges are part and parcel with the daily events. The Ngobe children are not very verbal. They have their own Native language; Spanish is their second tongue and needed for their education; and English is introduced sparingly. For one, the Ngobe language is vastly different than Spanish. “Gwa” is their word for “fish;” “bron huve” is their word for “let’s go,” and “nu” is their word for water. (Far different than “pez,” “venga,” and “agua.”) The Ngobe language does not have a phrase for “Please” or “Thank you.” We would teach these words and wait patiently for the children to say them. They would respond, but I doubt they understood the concept. Their language is pretty straight-forward, even demanding, and the children’s actions paralleled their speech. They grab instead of ask. They are rough and tough. Frankly, I doubt there is a Ngobe word for “Gentle,” but I sure said “Mas suave!” a hundred times a day.

The children live in thatched-roof homes, usually consisting of only one room. The bathroom might be shared by a few families and is away from the home. They have no running water or electricity. Often there will be eight or nine people per home: mom, dad, siblings, and grandparents. So having 25 kids, two teachers, and volunteers in a one-room school house seems fairly spacious to them. It seems crowded to me, and dirty, noisy, and hectic. But the children were fine with their school environment. Every so often a spider or wasp would become part of the class. Again, the kids rolled with the punches, confident I would squash it or shoo it away. There was no electricity, but the children do not have power in their homes, so this did not bother them at all. The weather was stifling, often in the high 90’s with humidity to match and no cross breeze. The children know no other climate, bless their hearts. Nonetheless, I am a spoiled American, and I am the first to admit that teaching in this situation proved challenging. My use of the imperatives in Spanish became pretty good. I guess practice makes perfect. Daily expressions became “Basta!” (“Enough,”) “No subas la ventana!” (Don’t climb out the window,”) “No le pagas el perro!” (“Don’t kick the dog,”) “No tires el gato!” (“Don’t throw the cat,”) and “No comas la pega!” (“Don’t eat the glue.”) Yes, we had a couple of homeless dogs and a cat or two as daily classroom mascots. In between my want-to-be commands, I would sprinkle, “Yo te amo!” and, definitely, I did grow to love these exuberant, free-spirited kids. During reading time (which the children could hardly get enough of,) I would have two kids on my lap, another two embraced in my arms, and two more hanging onto my neck. Truth be told, I was a sweating wreck, but the kids thought I looked just fine. Separation anxiety seemed to be unknown to these children. They plopped on my lap and into my heart the first minute they met me, trusting me as if I were family. A tattered book, a deflated ball, an over-sized Barbie doll, half a granola bar, and half a cup of water made these children as happy as my grandkids would be with an X-Box or an iPad. The Ngobes taught me that most of us give our children too many tangible possessions. The Ngobes know from a very early age how to be happy, and that poverty or wealth has very little to do with this equation.

Bocas del Toro can be paradise to many. The surfing conditions are superb December to July. The water is silk-like, the snorkeling and scuba diving world renown, the boating and sailing adventures abundant, the lobster at your beckon call, the Spanish classes at Habla Ya bound to improve one’s Spanish, the bat cave swimming experience a thrill and a half, and the night-life non-stop in Bocas. I fondly recall these events. But my long-lasting memories of Bocas del Toro revolve around the Ngobe children. I can’t help but cherish the memory of three year-old Mayribeth belting out the alphabet song, five year-old Aracelli bringing me her mother’s coconut oil to heal my sand fly bites, Rudolfo telling me that it’s fine to crawl through windows, and Rebeca and Piru deciding which has the better flavor: glue or toothpaste. Free-spirited, untamed, trusting, poor, and happy: these are the Ngobes. They taught me much about Panama; they taught me much about life.

A video selfie from the island of Bali 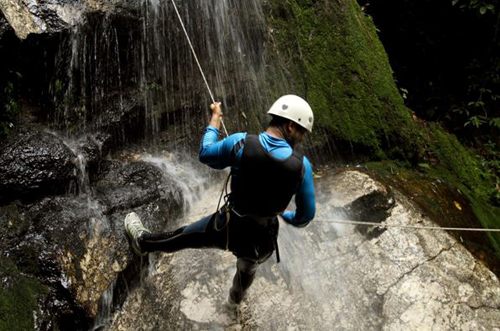 Top 5 adventure activities to do in Wales