I’ve always thought that the best way to counter the ennui that arises from our regular, humdrum, everyday life is travel. It introduces a wave of freshness and excitement that leaves us with a new sense of purpose and activity. However, the most difficult part of a vacation is often the planning of it. That is why the best travel plans are those that are spontaneously made.

One Monday morning in early December, I found myself staring blankly at the screen of my computer at work, not a fraction of the task I was supposed to be doing entering my brain. Almost unconsciously, I opened another tab and started browsing the number of attractive getaways for winter. That’s when I hit an offer I couldn’t refuse, a river cruise across the Danube from Passau, booked through Rius Cruises. Going through its pages, I came across a breathtaking description of an 8 day cruise on the river Danube, from Budapest in Hungary to Nuremberg in Germany. I knew right then that’s where I would be spending my Christmas holidays. The possibility of such a marvellous break made the rest of my bleak December so much more bearable.

So here’s an itinerary-cum-travel account of what I saw on the tour, in the hope that it may entice you to take that long-needed break’ I boarded the MS Bellejour booked through Rius cruises, whose streamlined structure was a veritable vision of beauty. The ship followed the serpentine course of the river, which cuts the city into the hilly Buda and the thriving cosmopolitan city Pest. I took in the breathtaking panoramic view of the city, which included the imposing Hungarian Parliament, the “Shoes on the Danube Bank” memorial, and the Hungarian Academy of Sciences. The ship docked near Chain Bridge and I took a tour bus from there and drove to the Castle District, Budapest’s main attraction. Lying on the Buda side of the city, it is a mesmerizing kilometre long limestone plateau which towers 170 feet over the river and houses the Buda Palace, Matthias Church and the Budapest History Museum. After strolling through these I walked up to the Fisherman’s Bastion, from the terrace of which I could see the entire expanse of the city lying before me.

The ship next took us to the Puszta; which is an excellent place to enjoy traditional Hungarian cuisine and culture. With lovely music, delectable food and flourishing wines, it was perhaps the most memorable evening of my life.

Our next stop was Bratislava (we were going up-river), the capital of Slovakia located on the border of Austria and Hungary. I had the thrilling experience of going through the Gabcikovo lock, and then received my first sighting of Bratislava. Through a guided city tour that covered the Bratislava Castle, the Slovak National Theatre, Primate’s Palace and Church of St. Elisabeth, I was able to gather much of the rich historical detail of the town.

Next on the tour was Vienna, the ancient city which is a melange of classical charm and cosmopolitan sophistication. The city tour of Vienna included a visit to Shonbrunn Palace, while I visited St. Stephen’s Cathedral on my own. The palace took my breath away. It was built in baroque style by the Habsburg Empress Maria Theresa during the 1740s. Its imposing structure and flourishing gardens are truly the fitting relics of the might of the Habsburgs. The iconic Cathedral is the main church of the Roman Catholic Archdiocese of Vienna (much like St. Peter’s Church in the Vatican City). With its ornate structure, numerous bells and baroque-styled architecture; it is designed to evoke wonder and awe.

A visit to Vienna is never complete without two things; wine and music. My itinerary included a Mozart and Strauss concert performed by the Vienna Philharmonic Opera. After the concert, which is beyond the reach of mere words to describe, I boarded the Heurigen Express, which took me through the historic wine villages of Vienna. We passed the Vienna woods, the magnificent vineyards and farmhouses, and the Beethoven Museum on our way. We disembarked at a wine tavern in Grinzing, and my evening passed over a glass of the delectable Wiener Gemischter Satz in the adorably rustic tavern, with the traditional bagpipes playing in a cosy nook.

After all the imposing highlights, my awestruck eyes were rested with a stop at the charming small town of Durnstein. We visited the ruins of Durnstein Castle, where Richard the Lionheart was held captive in 1192. A climb up to the castle is well rewarded by an expansive view over the entire city, along with the vision of sunset on the Danube River.

Being enterprising, I walked through the old town, entering through the 15th century Steiner Tor (one of the four Town Gates) and walking along the city walls on the beautiful cobblestoned streets. I did shop shopping, collecting several memorabilia of the once-in-a-lifetime journey.

We were still in Austria, and our last stop was the city of Melk. Though there was a lot to see, for lack of time we could only catch the Melk Abbey above the town, the iconic structure of the city. Originally founded in 1089, it was one of the main centres of manuscript production in the Middle Ages, some of which are still housed in its astounding library. The frescoes and paintings on the Church ceilings and walls are a wonder for the lay visitor to see. They include certain world famous frescoes like The Triumph of The Monk and St. Benedict’s Ascent to Heaven, which is a privilege to witness at first sight. We now left Austria behind and travelled towards Germany, passing the wonderful countryside with its lush meadows, charming villages and verdant fields. Passau’s attraction lies in its being the “City of The Three Rivers”, as it is situated at the junction of three rivers; where the Danube is joined by the Inn and the Ilz. The breathtaking vision of the mighty Danube being joined by two more rivers is wonderful to experience while approaching the city. The city tour included St. Stephen’s Cathedral and the sprawling Veste Oberhaus, but the highlight was the freshly baked gingerbread at Confiserie Cafe, whose warmth and aroma revived me wonderfully on a cold winter evening.

We were nearing the end now, and the penultimate stop was Regensburg, one of Germany’s oldest cities. We took a city bus which took us through the Old Town, showing us the Cathedral, the Town Hall, the Stone Bridge and the historic Thurn and Taxis Castle. Incidentally, the Romantic Christmas Market was in full sway at the time that I visited, so I was able to pick up traditional handicrafts, as well as enjoying the lively music and lights of the thriving market.

It was with a heavy heart that I approached Nuremberg, which was the last stop in my magical journey. We disembarked at Nuremberg, but I was able to see much of the charms of the medieval town before boarding the flight home. I circumnavigated a part of the city, keeping close to the ancient and imposing city walls. I also visited the Nuremberg Castle, located on a sandstone rock slightly above the city.

I forgot to mention the wonderful music with which the cruise organizers serenaded us every evening on the ship, and the wonderful food. Altogether, this was the most fulfilling journey of my life, and one that I strongly recommend you undertake as well. All photos courtesy of shutterstock. 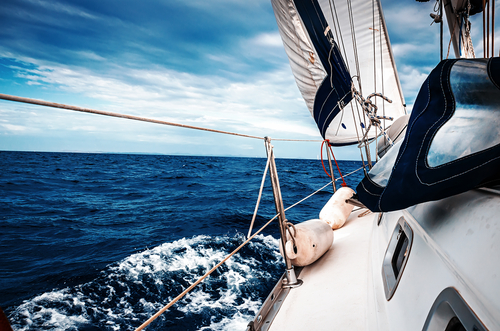 Free-fall adventure off the Queensland coast