There’s a lot to love about Portugal’s Southern Algarve. First and foremost there were the soulful strains of the fadistas, fado singers which captivated us. There was fresh fish, flavourful salt cod, succulent octopus and decadent desserts, all of which tantalized our taste buds. There were freshly whitewashed buildings in every town and village which startled the eye. There were walls clad with traditional Portuguese tile work which intrigued us. On our first day in Faro, gateway to the Southern Algarve, we followed the meandering narrow cobbled streets in the old walled city. By chance we were standing outside the Municipal Museum just before noon. Several times a day a fado recital is given in this former nunnery. João Cũna invited us to attend his next performance. The unique sound of fado (meaning “fate”) invokes the sadness of missed love and the disillusionment of dreams. The music and songs are inherently melancholy. It is music of the heart. We found it to be intensely emotional. More than anything it is a symbol of the country’s cultural identity. On this day João, wearing the traditional black attire, played a selection of melodies on his 12 steel-string pear-shaped Portuguese guitar. Between each number, he explained more about this musical genre. He told us that several types of fado exist: Lisboa, which is generally sung by women and Coimbra, sung by men, often university students. We learned that one should never applaud after Coimbra fado, just a polite “ahem, ahem” will suffice. He went on to say that some believe that fado evolved around 1820s, and was influenced by the music of Brazilian slaves. Others believe that this poignant art form dates back to the time of the Moors. Over time fado progressed from the streets to the concert halls. To illustrate how fado is continually evolving, João finished the recital by playing his original composition, “Fly Away”. In this arrangement, he combined classical and Celtic music. In the early 1800s, Maria Severa was the first fadista to rise to fame. Today, Mariza, with her unique style, is one of the most popular singers of traditional fado.

Later, we had perhaps a more authentic experience. We dined late at a small restaurant. In this intimate setting, we heard moving renditions by both a male and a female fadista. Even without understanding the words, we could feel the intense passion expressed by both artists. It is not so much the quality of the voice but the depth of feeling and compassion portrayed that grabs hold of one’s emotions.

Food, of course, is another distinguishing part of Portugal’s culture. Lunch, we soon discovered, is generally served between 12:30 and 3 pm. At this time of day, the air is often filled with the heady aroma of grilled sardines (“sardinhas assadas”). And these certainly aren’t the same as the canned variety. They are fresh and succulent and are at their best from May to October. I simply had to order this iconic national dish. My plate of sardines, each about six inches long, arrived accompanied by boiled potatoes and a salad of green pepper, tomato and bread. I soon mastered the art of de-boning. Next was the all-important taste test. The verdict: absolutely delicious. And one of the cheapest items on the menu, too.

Another dish that pops up on every restaurant menu throughout Portugal is bacalhau, dried and salted cod. It is the ubiquitous ingredient in Portuguese cuisine. Initially caught in Newfoundland in the 16th century by Portuguese explorers, the cod was dried and salted to preserve the fish on its homeward journey. Now the cod is mostly imported from Norway. Local lore maintains that bacalhau can be prepared in a different way for each day of the year. We enjoyed several versions during our stay. Bacalhau has quite a distinctive flavor in contrast to the milder taste of fresh cod. Sometimes it was served as fritters, other times roasted or shredded and combined with onions, garlic, potatoes, olives and eggs. All were mouth-wateringly good. Bacalhau can even turn up in burgers and soufflés. At Santa Luzia, the octopus capital of the Algarve, we discovered polvo. Since the 1700s, this picturesque fishing village has been linked with the sea. Today, octopus is the principal catch. Since the time of the Moors, fishermen have tempted the unwitting octopus to swim into traditional clay pots lowered onto the seabed. This was a delicacy we just had to sample. We settled ourselves comfortably at an outdoor table under the shelter of a large umbrella overlooking the brightly painted fishing boats moored in the sleepy harbour. The waiter advised that the polvo would take at least 30 minutes as cooking it to perfection can be a challenge. Every minute was worth the wait. It was so, so delicious.

And lastly, we’ll never forget the pastel da nata, delicious little egg custard tarts sprinkled with cinnamon and icing sugar and wrapped in the lightest of pastry. These little indulgences were first created by Catholic monks around the 18th century. On one occasion, they were served ever so slightly warm. We loved to share one of these with our morning coffee or at the end of our meal … or both. There is even an annual contest to select the best pastry chef for these delicious mouthfuls. Everywhere we travelled, we were entranced by the brilliantly whitewashed buildings. There were white churches, white bell towers and clock towers, white cupolas and minarets, white bridges and white homes. Whitewashing was a practice inherited from the Moors who occupied the Algarve from 711 to 1249. The whitewash causes heat to be reflected and also gives the surface its unique glow. Often the doors and windows are trimmed in bright blue or sunny yellow to guard against the evil eye. Some of the houses are topped by an ornate Moorish chimney, either for decorative or practical uses. This distinguishing feature, sometimes quite plain and sometimes artfully ornamented, represents the owner’s signature and wealth. It is a quirky idiosyncrasy of the local architecture. Another characteristic of the region was the gleaming white windmills which dot the hillsides. They are cylindrical in shape, topped with a conical roof and sporting canvas sails. Our guide informed us that the windmills provide a renewable energy source and, in former times, their triangular sails were adjusted depending on the wind’s force and direction. Some of these authentic windmills have now been restored and are used by tourists seeking out-of-the-ordinary accommodation. On occasion, the houses were faced with azulejos, painted tin-glazed ceramic tiles, creating a truly elegant façade. These, too, are a legacy of the Moors. Some we saw were geometric in design, some had floral or animal motifs and some depicted battle, religious or historical scenes. This unusual art form enhances both the interior and exterior of private homes, churches and palaces, restaurants and bars and even street signs. They are not only decorative but also protect the buildings against damp, heat and noise. They even provide a form of temperature control. The azulejos come in many colour combinations. The artisans-of-the-day seemed to favour the traditional blue and white but later on a touch of green, yellow or even red was often added.

Our sensory needs were now well and truly fulfilled. It was time to move on and uncover more of the region’s treasures. We had yet to explore its golden sandy beaches, to learn about the flora and fauna of its protected wetlands, to admire its centuries-old churches, monasteries and cathedrals and to gain some knowledge of its long and complicated history. In the Southern Algarve, at every turn there’s more to discover. 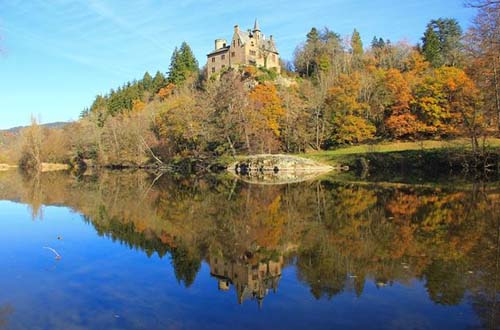 Luxury in the Loire: what to see and do

A tale of travelling the west coast USA