After we returned from Mother Teresa’s children’s home, I was told at the guest house about a ‘feeding centre’ set up by the Salvation Army in Calcutta, so I went there later this afternoon to see it. It is run by a certain Major Gardener, a retired Major from the Indian army at the time of the British, and I found out that he is as famous as Mother Teresa in Calcutta, and a film has been made about him, showing his feeding programme for the poor which he operates all alone.

He is an enormous fat man with a beard – not fat because he overeats I am sure, as he says he eats only once a day. But he has a disease which has caused his legs to swell up terribly and he can only walk very slowly as they are completely bandaged. I felt really honoured to meet him. He is one of those characters you can never forget – like a kind of Santa Claus.

He was very friendly to me but when I first arrived he said to me, “You have come just at the wrong time, as I’m just about to start feeding people.”

Actually it was just the right time. I saw a lot of poor people come into the large hall, queue up and receive large helpings of the soupy curry from enormous pots on the stove.

The Major called me over to talk to him while he was dishing it out. Some mothers received large bowls of food for their whole family. The soup was very thick, containing vegetables, chicken, wheat, vitamins, etc.

Afterwards the Major said I can go out with him in the van on Thursday evening when he takes out food to feed the people in the slums. In anticipation of this, I have booked my train ticket for Puri, the next step of my journey, for Friday night.

Going out with the Major was an experience I will never forget. When I arrived, some of his helpers were playing draughts, and then later, when he came and before we went out, he made me a cup of very sweet tea and got out a large tin of biscuits, urging me to help myself.

Then he said to me, “Tell me about yourself.”

Somehow I felt shy with him, but then I feel shy with everyone. He is such a kind man. He introduced me to his ‘sons’, two adopted Indian boys who live with him in the hostel where he lives. They helped him carry the huge pots of food out to the van. On the way we collected more food left out by the canteen of some office blocks, and then went on to the slum areas.

The van stopped in about six different areas altogether and each time small groups of poor people queued up with their cards. The Major cannot feed everyone – as it is he feeds six thousand people per day and the cost is eight hundred rupees per day which is supplied entirely by voluntary donations. A social worker goes out to check on the most needy people – ‘eligible’ people are mothers with large families, old people, and those who cannot work. I watched from the van as the people took the food to their little street corners and sat on the pavement sharing it out. On one occasion a little boy climbed up into the van and Major Gardener picked him up in his arms. The people were very happy because there was more food that evening – one office canteen had left out a great pot of rice, and apparently rice is rationed in India.

Eventually the trip was finished; just one evening’s work out of all those evenings in nineteen years since the day when the Major, who must be over sixty-five years, walked into the Salvation Army headquarters and asked if they had any work for him. He is not paid for his work but lives off his pension with which he also educates young Indian boys. The lady who runs the Salvation Army hostel told me this. He wears very loose white cotton clothes – much like Indian men wear.

When they dropped me back at the hostel later, the Major told me to come back and visit them on my way back to Calcutta, which I would do if I returned this way. Everybody I meet asks me to visit them again on my way back!

It is wonderful what the Major is doing, but how terrible that people are living in such conditions and such poverty as this in Calcutta. The government of India needs to do something about it – needs to care. I feel that the caste system is at fault. Calcutta should not be like this, like a hell hole. How did it get like this? Hundreds of years ago I bet it was different – more countryside, trees perhaps, and far, far less people: that is the secret.

I wonder whether the Major is a lonely man – but perhaps not. He seems to own nothing and has no real family here – his life is his work, but I think he is fulfilled. He told me he is looking for somebody to carry on his work when he is gone.

I wonder if his sons will do it. I had the feeling that he was thinking of me. At one time I had thought that perhaps I could stay and do charity work in Calcutta, but Calcutta is such a terrible place. It depresses me so much that I know I can’t stay here long. It is not my destiny and I am restless to go on travelling further.

Even though I am religious – I believe in all religions – I don’t believe in missionaries. I don’t believe that people should try to convert others. It is beautiful to help others, but for their sake only; not to change their religion − that is aggression. I do not feel that Major Gardener is doing his wonderful work for the wrong reasons though. I feel that he genuinely wants to give of his love, although I suppose his religion influences him, as Mother Teresa’s does. There is nothing wrong in this. Whatever influences us to do something beautiful is good, as
long as our ideas are not forced on others. 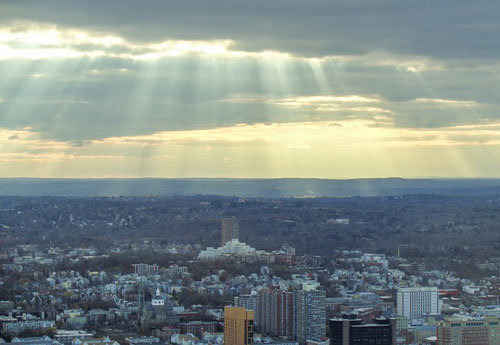 Boston: Home to Harvard, heritage, and an easy escape