‘Is that sweat or is it raining outside?’ my mother enquired while looking up towards the stunning 1200m² glass-roof atrium of the Sheraton Grand Kraków.

It was overcast this sub-zero December morning so she could not have seen droplets and, at 100-odd feet tall, it would have been especially difficult to make them out, even if possessing the binocular vision of an eagle or outstretched neck of a crane.

‘It’s sweat,’ I replied before gulping down a glass of arctic-cold water at the juice bar.

‘Did you do what you needed to’, she asked as I returned to the breakfast table wiping my forehead, ‘since you said you couldn’t pay sufficient respect yesterday?’

Not since Luxor, when driving from the airport to the city centre, did I see such a long convoy of coaches (then en route to Hurghada) as that which snaked around roundabouts before slithering into a theme park-like parking lot in Oświęcim, a town better known by its Germanized name: Auschwitz. The coaches – displaying an array of European registration plates as well as windows emblazoned in both Arabic and Hebrew script – disgorged people at such an alarming yet life-affirming rate that numbers resembled those outside football stadia, with queues at turnstiles and in terms also of noise generated. The sight of so many sightseers at Auschwitz-Birkenau State Museum (ABSM) is to be expected (since the concentration and extermination camps, arguably the most infamous places on the planet, received 2,100,000 visitors in 2017); ear-splitting, selfie-snapping crowds less so.

Visitors taking selfies in front of the Arbeit Macht Frei sign at Auschwitz-I and, approximately 1.5 miles away, behind the iconic watchtower on railway tracks at Auschwitz-II has caused a stir recently, leading a documentary-filmmaker to position cameras around former Nazi death camps in order to better comprehend “dark” tourism. One of those camps filmed was Dachau, which limits the size of a tour group (30-35), the number of groups allowed to enter daily (15) as well as those starting at the same time (3). These measures ensure, says Dr. Sarah Hodgkinson, ‘that [the site] is not generally crowded as you wander around.’ Despite similar restrictions being in place at ABSM, hordes hinder the opportunity to absorb content and reflect on the c.1.1 million who perished in these death factories. (It is not before time that Anne Frank House, which received 1.3 million through its doors in Amsterdam in 2017, took steps to alleviate the snake-like queues which have become features both inside and outside by granting only pre-purchased ticketholders access for large segments of the day.)

Unlike Michael Palin, who observed at length and in silence one of the gas chambers and two tonnes of human hair during his visit, I – like other non-BBC travel presenters – was exiting an exhibition room within a barracks near-enough as soon as entering it for another party of people was pouring in behind. And it was one of these party members who, while waiting in a corridor lined with prisoner photographs, mockingly referred to one as The Boy in the Striped Pyjamas. It was for this, among other reasons, that the next day I set off from the Sheraton (the overpriced surroundings Palin similarly inhabited), walking the five-odd mile round-trip – via the deeply affecting Ghetto Heroes Square – to the Płaszów Camp in the Podgórze district prior to checking out. 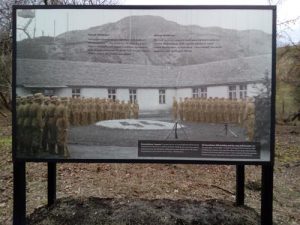 Steven Spielberg’s 1993 worthy Oscar-winning film Schindler’s List (about German industrialist Oskar Schindler who performed a humane act during a time of horrifying inhumanity) introduced Płaszów – known hitherto merely among survivors and scholars – to the masses and yet, a quarter of a century on, I had a solitary dog-walker for company in the sparsely wooded hills. For this I was thankful given the lower number of casualties and less sanitized surroundings enabled me to engage with the past without pressure. After placing a stone – as is Jewish custom – at a memorial, I walked back, fast, past the hectares of advertising hoarding which provides a backdrop to the slow-running Vistula before answering my mother’s question in the affirmative since only now had I respected those 10,000 (primarily Jewish souls) who died at the forced labour-turned-concentration camp.

Future visitors might not be able to reflect at such length and in silence, what with the planned commemorative project at this semi-neglected site of Holocaust history (where there is currently a pervasive lack of signage, with only small placards containing rudimentary information dotting the landscape), yet to paraphrase Palin: ‘[T]he evidence of brutality [must be] kept in good condition [if] people [are to] never be like this again.’

New cruise destinations to look out for in 2018