We came over the mountains and landed in the flat, barren ice fields of Punta Arenas. A revised itinerary indicated a bus would pick us up at the airport at 1:30PM. For some reason I felt we needed to clarify this so we attempted making a phone call. That was not an easy task because we didn’t even know how to use the phone much less which of the multitude of phone numbers we had was the correct one. Was it inside or outside of Santiago, a cell or a landline, incoming or outgoing? I had no idea; it was all a nightmare in the making. Fortunately there was a great Spanish guy in the information booth in the terminal who spoke wonderful English so we were able to utilize his help. After about half an hour of this utilization I’m sure he was sick to death of us.

Our journey headed north from Punta Arenas by bus; a very nice, comfortable touring bus I might add. Still, three hours on a bu-u-u-u-us can only be so good. The scenery for the first hour was Ontario in February. Snow-covered, rolling hills – I managed to sleep through most of that. Then I cleaned my glasses. That took three minutes. Once we passed the halfway mark the snow had all but disappeared and it was Africa. I’ve seen this terrain before but with elephants. It was flat and barren with scrub-like brush and dried trees but in the distance the Patagonia we came to see beckoned. High, piercing peaks foreshadowed the promise of our next two days.

Puerto Natales is a quaint little town of 18,000 that will require further investigation on my part. Carlitos, the rep from the Hotel Remota was there to greet us with a sign announcing David Whitehead – not bad; Whitehead was spelled correctly and my middle name is David. The town reminded me of Anchorage or Homer, Alaska with the snow-covered mountains engulfing it; all very interesting because I have never been to either of those northern locales.

The sunset across the fiord from the hotel was close to perfect. The air was crisp – downright cold – and incredibly clear. I found I had to take the camera away from my eye so I could fully enjoy this most noble of nature’s treats. The clearness and stillness of the cold evening air simply magnified all that was wonderful about this particular sunset. Ah, Patagonia! We have arrived! 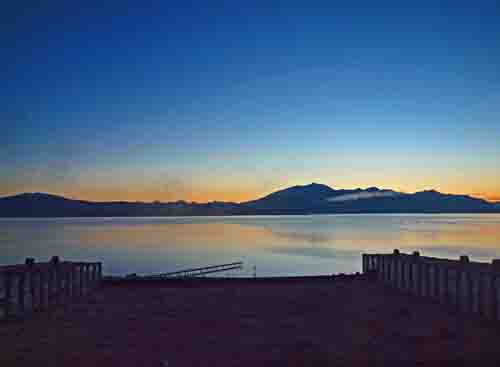 Both Karen and I woke up at what my watch said was 5:15AM. Five minutes later we got our 7AM wake up call. This watch has got to go. It was snowing quite heavily and we hoped our anticipated visit to Torres del Paine National Park would not be in jeopardy. However, it started to clear a little and we left for the Torres at 9AM. Torres del Paine means Towers of Blue and to see them was pretty much the reason we chose to come to Patagonia. The drive to get there took about two hours. It started out a little treacherously on snow-covered roads but these people here know how to drive so I relaxed and enjoyed the journey.

It’s always a good day for me if I see wildlife in its natural habitat. So I was thrilled to start early today – and it seemed to be so much better in the snow. Our guide Fernando pointed out an enormous, black breasted eagle perched on a fence post at the side of the highway.

At about the halfway point the paved road ended and the long, dirt road commenced. We made a brief stop at a trading post at the crossroads. This will be registered in my memory as having the coldest bathrooms on earth. I swear the water in the toilet bowl was frozen. After a warming beverage we continued into Torres del Paine National Park.

The wildlife sightings continued much to my delight. I have been fortunate to see many of the South American camelids – the llama, alpaca and vicuna. Today was a new one in the graceful mountain guanaco. They were present here in large herds dotting the snowy hillside, looking skittishly about. As Fernando explained, the guanaco are prey for the pumas which are plentiful in this area. However, we are unlikely to see them in the daytime. The guanaco’s fate would be sealed as they are graceful, jumping four foot fences with ease and seemingly in slow motion, but they would be no match for the puma’s stamina and ferocity. 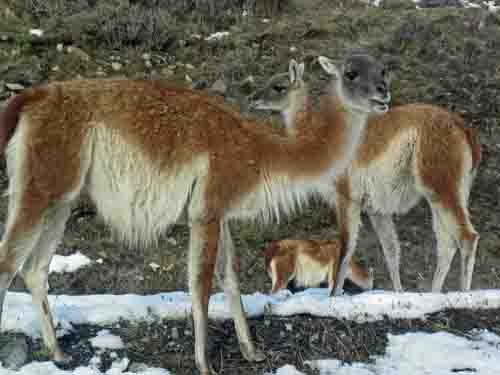 It began to clear when we first sighted the towers but as we got closer the clouds rolled in and obscured their tops and misted the rest of the view. It is these massive granite peaks that people come to see so this weather was not ideal and I must admit that I was a little disappointed. However, I am aware that the best way to see Los Torres is on foot on a trek lasting several days. That option was not available in the winter as the trails were all closed so I was going to have to be content with my experience today as is.

I asked Fernando what Patagonia meant and he said it was hard to determine because, as is the case with many words and phrases, it comes from legend. The Patagones were an alleged Yeti, Abominable Snowman type of creature so Patagonia roughly translates to Land of the Giants. Hey, I’m living in a sixties sci-fi television series! 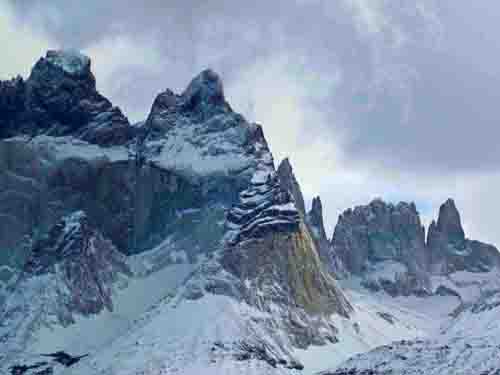 “The Horns” are on the backside of the towers and are comprised of sharp, jagged rocks formed by the sliding and folding of rock layers over millions of years. A two kilometre hike in to a waterfall was a fascinating diversion. Generally speaking, the scene was breathtaking. The waterfall itself was an obviously ice cold torrent cascading endlessly with a rainbow flashing in the sun. 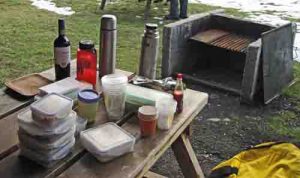 Fernando had selected a closed campground at the foot of the horns as the venue for our lunch. On the way we were treated to more guanaco. This time they were right up on the shoulder of the road. As we slowed and stopped the van they seemed to pay us no mind so I went to work with my camera.

The lunch was absolutely amazing. Bear in mind that this is a picnic lunch like no other; a very spicy, piping hot chicken soup followed by a flawless Caesar salad, with turkey and what he called a meat sandwich perfectly toasted and served with cheese and vegetables inside. Around here I have learned that if the meat is not named don’t ask because you may not like the answer. It’s probably some cute cuddly thing that you’d rather have as a pet. I love Chilean picnics!!! 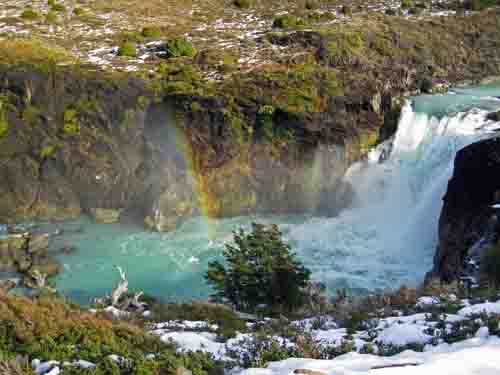 I don’t want to say that the trip back to the hotel was rough but it was plenty bumpy on the back roads of Chile and when we arrived at Remota my teeth hurt. We sadly had to admit that our time in Patagonia had basically come to an end.

The thing I will remember most is wilderness. We were able to see it in its near purest form. We saw wildlife and only a handful of cars in the park. I realize that it is winter here and totally off season right now. This place is probably like Yellowstone come their summer but we saw it at its best and that is what will stick with me. As sad as it was that we were leaving Patagonia it was difficult to get too upset because we would be leaving for Easter Island bright and early in the morning. 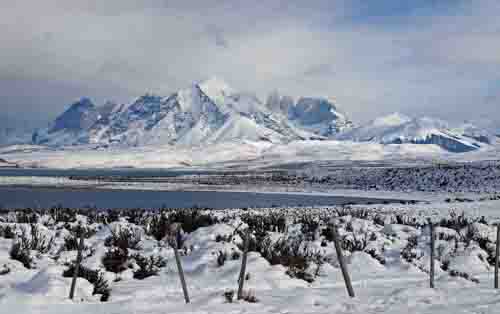 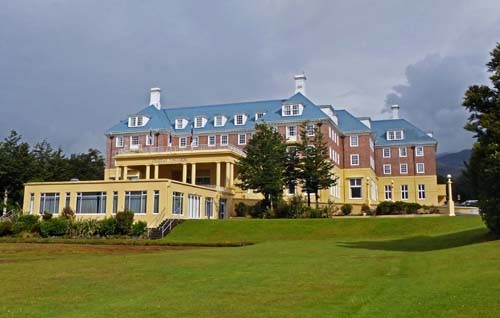