The paradise of providence. That’s how I felt about Puglia in Spring. So fertile for its dry, hot climate. So uplifting with its masseria, the whitewashed farmhouses with their singular but solid shapes and spacious courtyards. 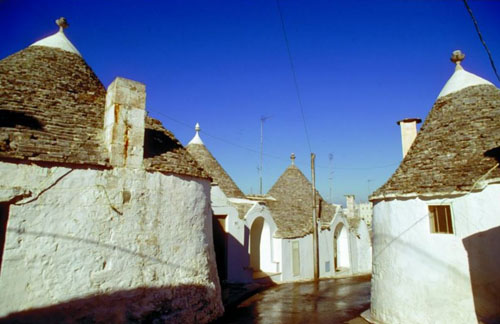 I had left the cold British spring to experience instantly its warm summer equivalent. It was so engaging and life-enhancing and my senses were alive to the many stimuli of smells, sights, sounds and sensations of the masserias. The atmosphere reminded me strongly of the sensuous film “I Am Love” starring Tilda Swinton. Fields of poppies, daisies and yellow camomile flowers danced in stunning meadows beside ancient olive trees whose distinctive twisted trunks resembled individual sculptures. Swallows and butterflies flitted; bees buzzed through dappled courtyards and the cacti and fig trees were bearing fruit.

I stayed first at Masseria Le Carrube. It’s the passionate project and personal philosophy of Valentina De Luca and her cousin. Four years ago it was a run-down farmhouse but now there are 19 guest rooms, a dining room featuring an olive press which once was pulled in a circle by a horse and the ‘sala mangiatoia’, the room that was the former feeder for the horses complete with its original trough. All very life-enhancing and sensually stimulating. 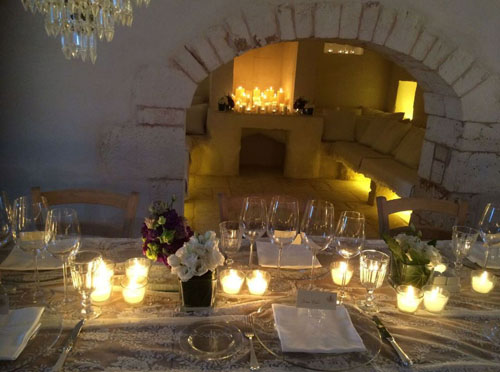 A stay of five days in Puglia was long enough for me to visit many of the local attractions and historic towns. On reaching Ostuni, ‘the white city’, from the west her citadel has a dramatic precipice straight down from its whitewashed walls. The town is typical of the Mediterranean with gesticular, animated spirits clapping hands and waving arms; laundry hanging out over the streets and narrow ancient passageways offering me a brief respite from the gorgeous heat while enticing me to meander on and on.

Next along is Alberobello with its greatest concentration of ‘trulli’ from their golden age of the 19th century. These white limestone conical dwellings with keystone vaults are whitewashed with many layers. They were constructed both as storehouses and temporary field shelters and also as permanent houses. Being built of small stones, they fit their narrow settings. Whitewashed symbols adorn some of their roofs, typically in the form of either a cross on a heart pierced by an arrow, representing Santa Maria Addolorata, ‘Our Lady of Sorrows’, or a circle with religious connotations.

I then was to stay at Masseria San Domenico. Owned by the same family-run group as Masseria Le Carrube, Borgo Egnazia and Masseria Cimino, it’s five minutes from the shore and you enter it along the most dramatic of drives, a long avenue lined with fragrant jasmine bushes which frame ancient olive groves set in rich, fertile and vibrantly brown earth. My senses were engaged and visually enlivened. 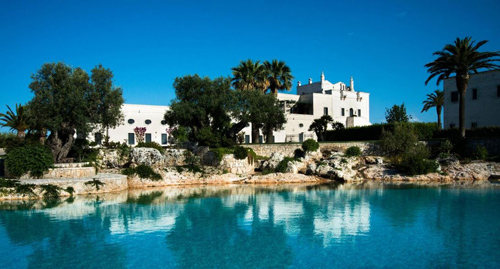 The hotel attracts many for its ‘spa-talasso’ and neighbouring golf course. The spa makes full use of the benefits of seawater and there’s a sandy beach at La Fonte. It’s all perfect walking and cycling territory: flat yet scenic. The impressively vast outdoor swimming pool contains seawater at a natural temperature that works well with the rock formation in which it is partly set.

The sandstone of the masseria is reminiscent of Corot’s ‘Avignon from the West’ in London’s National Gallery. I sensed the real glory of the masseria’s spaciousness from the different picturesque views from the bar, from the poolside restaurant and from the outdoor courtyard where breakfast was served. There’s a liberating sense of space both inside and out. Even at full capacity it felt like I had the place virtually to myself: quite a luxury for all of us with busy lives.

The main building was once employed by the Knights of Malta to ward off Ottoman attacks with its 16th century watchtower, now the private quarters of the owner Marisa Melpignano who realised her dream by acquiring it in 1980 as a holiday home then to invite friends before then recognising it for its greater hospitable potential. 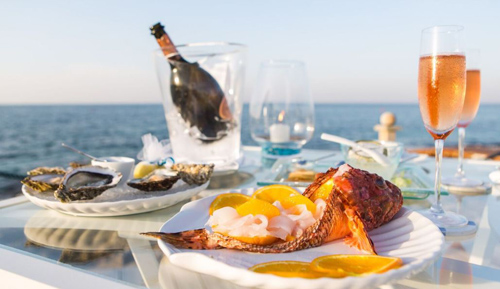 The hotel is keen to promote the healthy benefits of the local produce: what they call the ‘Mediterranean Diet’. It’s a combination of all the food habits adopted in the region, characterised by the presence and cultivation of olive trees. It’s a triad of bread, oil and wine demonstrating a strong commitment to arboriculture. All produced by the labour of love, water and sunshine and all very bountiful.

The hotel’s spa promotes itself with Plato’s quotation that “the water of the sea washes away all of man’s pains and sorrows”. To the uninitiated there’s plenty to marvel at. The packages of 2-3 days, designed to promote wellbeing and happiness, offer scrubs and detoxing, oil wraps, jets and face masks with seawater and crushed seaweed providing their saline and mineral benefits. All highly restorative. All very balancing. But that’s not all! Do you know what any of the following are: adipocytes, lipogel or hydrokinesitherapy? Not to mention aparatology and gommage? Both manual techniques and high-tech beauty equipment make this a spa at the height of modernity, half scientific, half human intuition. Men get a look in too with ‘smooth and lift relaxation’ sessions, sports massages and olive oil wraps using the ancient local trees. Whatever technical terms you select I recommend the wrap! 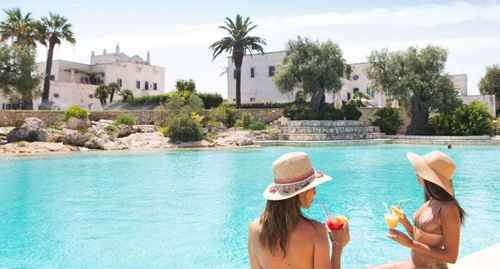 Back in the fields, by late April the farmhands were sowing seeds down precisely lined rows and harvest had already been gathered into hundreds of immaculately rolled golden bails of hay. Puglia in spring had ‘trulli’ enchanted all my senses!

Adam Jacot de Boinod was a researcher for the first BBC television series QI, hosted by Stephen Fry. He wrote The Meaning of Tingo and Other Extraordinary Words from around the World, published by Penguin Books.

A tragedy unfolds in a Gold Rush brothel