The town of Page in north central Arizona experienced a population boom in the fifties and sixties as the construction of Glen Canyon Dam was undertaken. That was followed in the seventies by another construction project, the Navajo Generating Station. Following that the resulting Lake Powell brought tourists from far and wide in the hundreds of thousands.

In 1869 Major John Wesley Powell mapped and explored this incredibly complex lake region. He was a genius because we had a map and a car and still had trouble believing the intricacies of the lake fjords and inlets.

Lake Powell is one of the largest man-made lakes in North America. It lies at 3,700 feet elevation, is 186 miles long with 1,960 miles of shoreline, has 96 major side canyons and a maximum depth of 561 feet at the Glen Canyon Dam. Surrounding is a breathtaking collection of buttes, mesas and cones highlighting the Mediterranean-blue waters. About 90% of the lake is in Utah with the remaining 10% in Arizona. 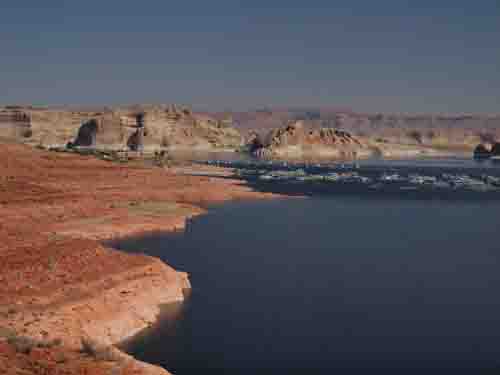 The Glen Canyon Dam was constructed between 1956 and 1966 and is 587 feet high. By 1980 much of the Colorado River’s original canyon disappeared from view and Lake Powell was created. The bridge and gorge were quite an impressive sight as we stood in the Visitor Center 700 feet above the river below. It is a dramatic example of one of nature’s most inspiring settings combined with an ambitious human project.

It was time to get to the Antelope Canyon Tour Office. We were a little stunned at how busy it was. There must have been at least 150 people there! I didn’t know if the two dozen Japanese tourists knew something we didn’t but they showed up in ponchos, hats, scarves, masks and hoods. It was 75 degrees, a perfectly clear blue sky with not even the hint of a breeze. What am I missing here?

We piled into one of about a dozen specially equipped pickup trucks with seating for 14 in each. It was about a 20 minute ride from the tour office to the canyon; ten minutes on a paved road then ten minutes on a deep sand, rockin’ and rollin’ bronco ride into the entrance. If you wear dentures keep your mouth closed because the ride will bounce your teeth right out of your head. We were warned to hang onto our hats and all our belongings because they would not stop if anything fell out. I don’t think they would stop if you fell out. 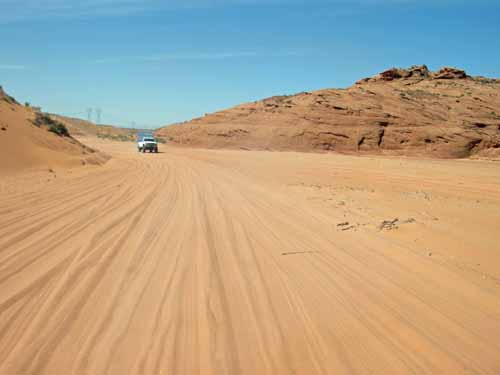 Although Arizona is known for The Grand Canyon, Antelope Canyon is a spectacular petrified sand dune created by wind, water and sand scouring a narrow crevice in the mesa to form a slot canyon revealing the sculptured masterpiece. It is a quarter mile long and 130 feet deep. The canyon was discovered in 1931 by a young Navajo girl herding sheep in the area. It is very difficult to take photographs inside but slow exposures and tripods or wall-assisted steady hands will put you well on your way to that perfect picture. Experiencing this beauty will leave you breathless.

Access is restricted by the Navajo tribe and you must take a licensed, guided tour. It feels more like a cave than anything else but if you look up through the swirls and scoops of rock above you do catch the occasional glimpse of sky. The view from within is nothing short of spectacular. A palette of colours is transmitted by light filtering down from above and bouncing from wall to wall.

The passageway through the canyon snakes and curves continuously and the light from above is constantly changing as it reflects off the smooth, wind sculpted walls of the narrow opening. The walkway is heavy with sand and can be difficult to navigate at times. I booked the 1:30 tour because I knew the sun would be high and pretty much directly overhead at that time of day. I thought that would yield the optimum colour and just made a lot of sense. So did about 150 other people.

My first thought was, “Crap, I’m never going to be able to get a photo that isn’t crowded with people!” No worries. You pretty much walk looking straight up most of the time so there are no people at all in your photos unless you want them there.

Our guide did a great job of pointing out some of the canyon highlights. It may initially have been a spiritual thing but she was quite adept at seeing things in the rock that I rarely saw but surprisingly was revealed to me when I took a photograph. Will I see them when I look at the photos a year from now? Hmmmm.

Our guide also did an excellent job of giving people photo advice as we walked along; where to shoot, what to include, what to adjust. “Do not include the sky!” I can’t even imagine the days of film, having to wait a week or two to see if you had anything worthwhile. You had to pay for every photo and the film then so I surely would not have been able to finance this tour as I took over 100 photos.

We were able to wait just a few minutes outside at the end of the canyon then we walked back through to the parked vehicles. Somehow the trip back through the canyon was anticlimactic but it was still beautiful. The drive back to the office did not seem as long or as bumpy. It’s hard to imagine that we will ever see anything more fascinating than Antelope Canyon.

Hang on to your huskies from a sled safari in Sweden 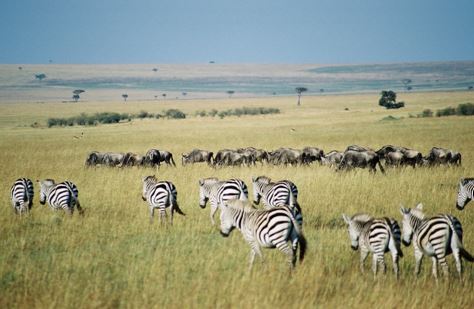