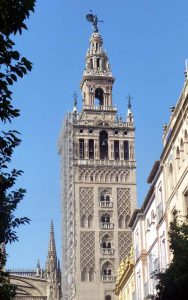 Last October our travels in the Iberian Peninsula eventually brought us to Seville in Southern Spain. This is a jewel in Andalusia’s crown. The City is home to the world’s largest Gothic church, the Cathedral of Saint Mary of the See, a protected World Heritage Site. Also the passionate art of Flamenco has its roots here.

We stayed at the 18th century Amadeus Hotel. This charming family-run boutique hotel is located on a narrow pedestrian-only alley in the heart of the Old City. The walls are adorned with a miscellany of musical instruments. On view in reception is a miniature statue of Amadeus Mozart. Our first breakfast was served on the rooftop terrace from where we could see the Cathedral’s many spires and bell tower.

At the top of our agenda was a visit to Seville’s Cathedral. A short walk brought us to a small lively plaza buzzing with tourists. We continued to the Patio de los Naranjos where we met our local guide. Seville’s history extends over 2,000 years. In 2 A.D. it was inhabited by the Romans. In the 5th century it was ruled by the Visigoths. Then in the 8th century, came the Moors who governed for over 700 years. In the 1400s the Muslims were pushed out and Christianity became the country’s principal religion. 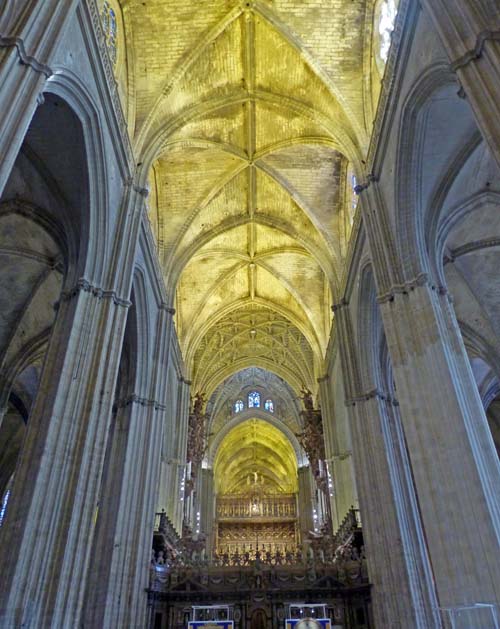 We learned that the Cathedral’s cornerstone was laid in 1436 on the site of the 12th century Great Mosque. Our guide advised us that even then builders recycled certain materials. The large rectangular stones at its base are of Roman origin. Several elements from the mosque were also preserved … the brick bell tower, also known as La Giralda, and the Moorish courtyard. The Cathedral is a massive structure which took over 100 years to complete and which was heralded as a symbol of the City’s wealth and power. 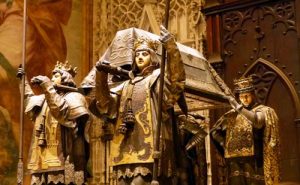 On entering, we were taken aback by the building’s sheer size and grandeur. Its pillars and Gothic archways soar forever skyward dwarfing us mere human beings. In area the Cathedral complex is roughly equivalent to that of a football stadium. Its longest nave extends over 400 ft. and the interior is so ornate that it defies the imagination. The stained glass windows are stunning in their artistry. The huge main altar with its 44 gold-leafed wood carvings depicting the life of Jesus dazzled us with its biblical splendour. We paused at the final resting place of the famous explorer, Christopher Columbus, who contributed so much to Spain’s economy. His bronze tomb is carried by the representatives of the four kingdoms of Spain: León, Castillo, Navarre and Granada. We visited just a few of the 80 side chapels which are adorned with artifacts and paintings by Spanish artists.

Exiting the Cathedral we decided to climb the iconic bell tower, a legacy of the City’s Moorish past. It was built in the 12th century in the Islamic-style with interlaced brickwork and double arches. In the 1600s a belfry was added by the Spanish conquistadors. The result is an intriguing blend of Moorish and Renaissance architecture. When the City was ruled by the Moors, the muezzin climbed this Islamic minaret five times daily to call the faithful to prayer. To ease their journey the tower was designed with 34 gently sloping ramps wide enough to accommodate two mounted guards. Up, up I went. From the viewing platform beneath the huge bronze bells, there were good views of the Cathedral’s rooftops, the Patio de los Naranjos and the City’s Jewish quarter. 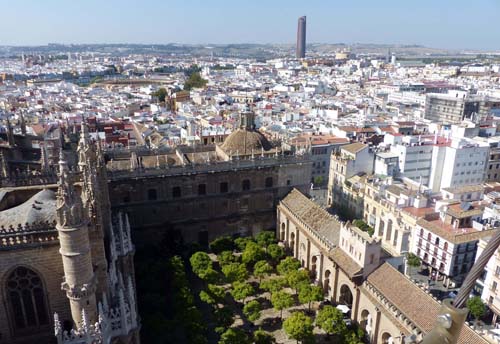 There’s a saying in Seville: “es Fiesta y Siesta” (“it’s party and sleep”). We’d enjoyed a refreshing nap and were now ready to attend a Flamenco recital, one of the world’s most passionate and intense art forms. 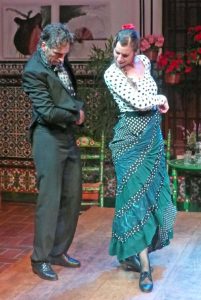 This expressive style of music and dance was born in the streets of southern Spain and draws from its gypsy culture as well as other historical influences. We waited impatiently for the one-hour performance to begin. The setting was small and intimate. There were four performers: a guitarist, a singer, a male dancer and a female dancer. The dancers follow the lead of the “cantaor” whose gravelly rendition brings a unique emotional intensity to his songs. Sometimes the sequence is embellished by precise hand clapping patterns. We were entranced by the pulsing rhythms, the intricate hand, arm and body movements and the rhythmic foot stamping of the dancers. Our eyes were irrevocably drawn to the female dancer. She wore a form-fitting, brightly coloured full length dress with a long trailing ruffled skirt. From time to time, she would dramatically flip the ruffles adding emphasis to the music. Just to watch such a breathtaking performance was exhausting. No wonder we, together with our fellow patrons, enthusiastically shouted our “bravos” and “oles”.

And so our fulfilling day in Seville came to an end. This capital city of Andalusia has other historical sites to discover and cultural traditions to experience. Tomorrow, we plan to start the day with a visit to the Real Alcazar followed by a tour of the Plaza de toros de la Real Maestranza de Caballería, the bullring, and perhaps even a horse-drawn carriage tour. 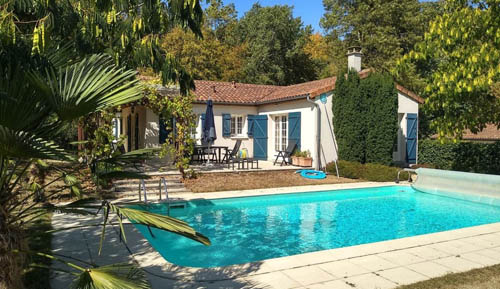 Rental homes and holiday camps give you bargain France 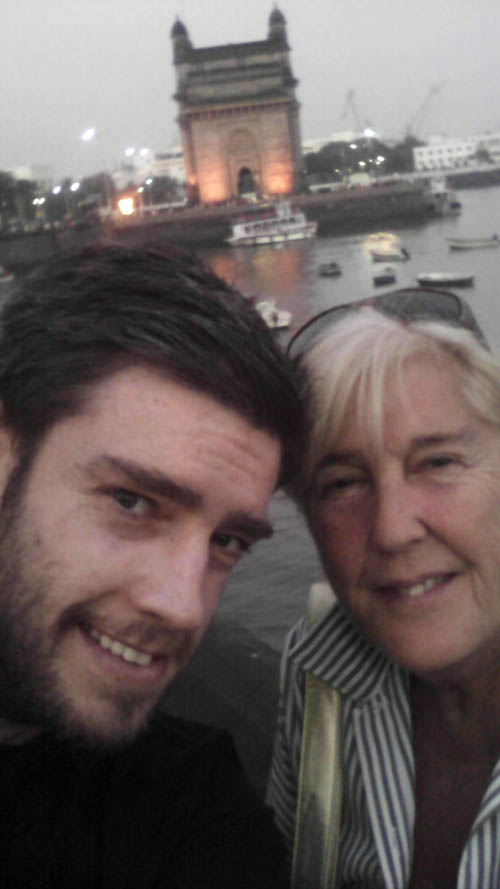