There are 50 states in the United States of America. I have visited all 50 but Arizona remains a favourite after nearly 50 years of travelling. In 2012, Arizona celebrated their centennial anniversary. It was one hundred years ago that president William Howard Taft proclaimed the territory America’s 48th state. It was only fitting that we should travel there to explore the past, present and future of this amazing, young state. The colourful stories of the people who shaped Arizona are varied and numerous and the breathtaking landscape pre-dates statehood by several million years.

As fact turned to folklore the town of Tombstone’s fascination with the Earp brothers and the OK Corral spawned the birth of Arizona’s movie industry. The Western as a cinematic icon in the forties and fifties graced many Arizona landscapes with the likes of John Wayne and Clint Eastwood.

Arizona is living history and culture and I was so pleased that we were going to see it in its centennial year and with our dear friends Karen and Murray. Murray is a high school friend of mine that I have known for over 50 years now. We were doing this trip with him and his wife Karen. It was going to be something special – a rerun, in part, of our trip in 1971. That trip has been chronicled in our book “Then There Was One-The Ultimate 70’s Road Trip.” No camping this time though. I have known Dave for the same amount of time. He and his wife Christy had recently purchased a retirement home in Peoria, Arizona. A visit with them was the spearhead of this trip and the reason we were there. 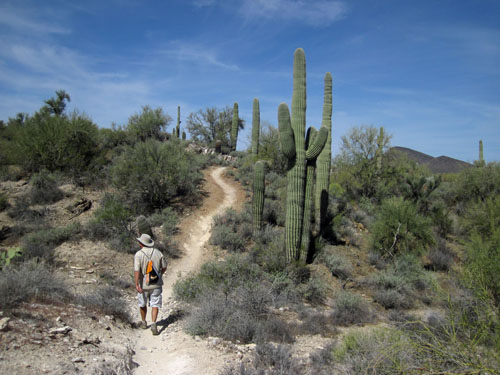 In 1974 Canadian singer/songwriter Gordon Lightfoot sang, “Carefree Highway, let me slip away, slip away on you”. Located in the town of Cave Creek, just 1.5 miles north of the Carefree Highway, Cave Creek Regional Park is just about a 45 minute drive from Dave and Christy’s house. I thought the White Tank Mountain Regional Park had been the perfect desert landscape but I was wrong. Cave Creek has it beat.

Astounding desert views are contained in this 3,000 acre park resting between 2,000 and 3,000 feet altitude. There are remnants of the failed, abandoned operations this area was used for in years gone by – mining, irrigation farming and both cattle and sheep ranching. 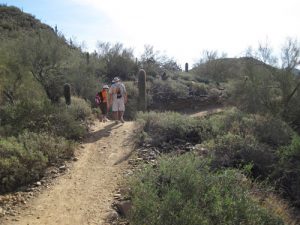 Dave had selected the 5.8 mile Go John Trail for us. Named after George O. John, owner of the G.O. John mining claim, it is challenging because of its length. It should have taken from two and a half to three hours to complete but my constant Kodak moments extended that. The loop trail was classed as moderate but with cactus and spectacular views that never quit difficulty was never in mind.

The sagebrush, ironwood and numerous species of cactus all around coupled with the perfect blue sky of Arizona were the living lyrics of “Don’t Fence Me In.” The trail loops around the mountain to provide the illusion of being miles away from civilization. The smooth surface for the most part allows you to enjoy the stunning views instead of worrying about your footing. But take care, part of the trail is very rocky with an elevation gain of 849 feet. Be sure to get an early start because it gets hot fast; and bring plenty of water. 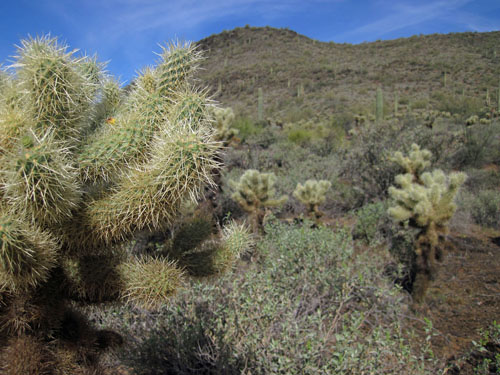 At times I had to just stop and look across the desert floor as it flowed into the city miles away between the mountains. It’s almost like an aerial view; one you certainly cannot capture from the street level. As they walked, Karen and Dave got further and further away but I was never concerned that I would not be able to find them. They both, coincidentally, had managed to wear something that was bright orange in colour. Not even the deepest camouflage of the desert could mask that bold statement.

As Dave and I discussed the cartoon concept of the Saguaro cactus, complete with plumbing, we happened upon one that had been badly marred. As we studied the internal structure we concluded that Looney Tunes was indeed just that. What a maroon!

The Cave Creek Go John Trail is shared by hikers, mountain bikers and horseback riders. We saw only a few people hiking, no bikes and probably more horses than anything else. Dave and Karen were also fortunate to see a snake. They really are not to be feared if you act responsibly near them. The dissertation on the map we were given plainly states, “Leave snakes alone! Remember that you’re visiting their home. Stay calm and go around them. They know you’re not food.” 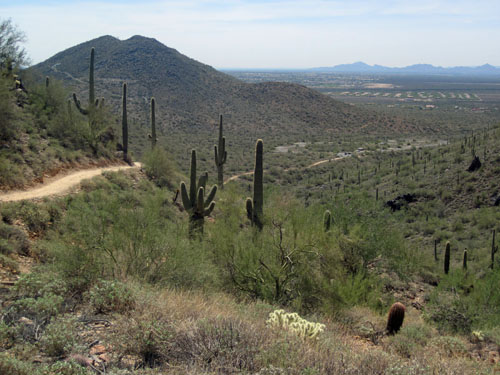 The hike was not easy but it was the perfect length for us. I was 60 now so I don’t think a day went by, probably not a moment went by, that something didn’t hurt. It was plenty challenging with continuous ups and downs. There was very little in the way of flat sections, and why is it that on a trail such as this there are always so many more ups than downs?

Okay, I was sore and dusty and hot and dry so was ready for an ice cold swim. It was about 80 degrees but it felt a lot hotter than that to me. But it’s a dry heat remember. Yeah, so is that oven over there but you don’t see me climbing into it. That feeling was soon circumvented by a dip in the Antarctic waters of our hosts’ community pool.

This had been a different kind of vacation for us but in a wonderful way. Karen and I usually travel alone, to an unusual destination and spend a lot of time hiking and exploring. We had a bit of that on this trip but we had so much more. We shared the company of wonderful friends. It’s pretty hard to top that. 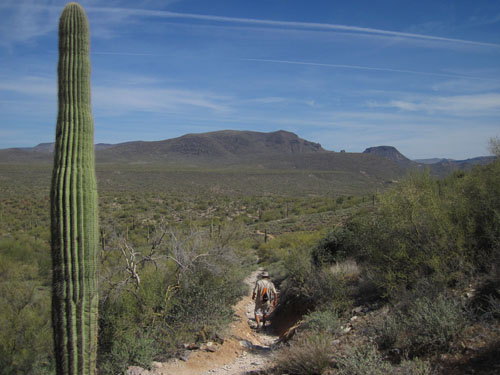 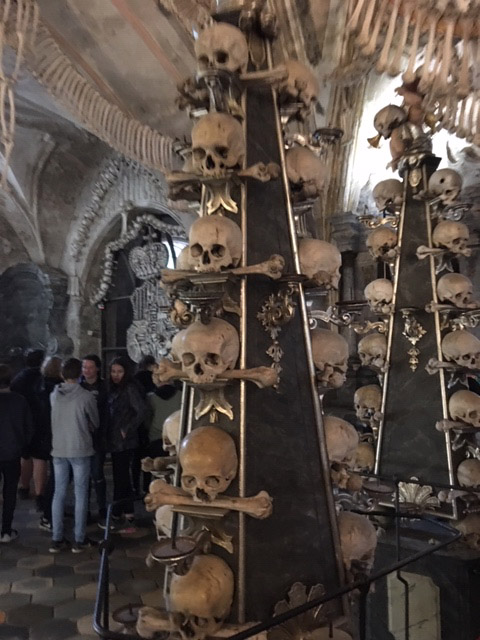 Budapest, Prague and a mother-daughter bond

A shopping trip in Jaiselmer and how to test Pashminas