Haida Gwaii, formerly called the Queen Charlotte Islands, is an archipelago of more than 150 islands about 120 kilometres off the BC coast. Approximately half the population of 5,000 are Haida, the First Nation whose 12,000 plus year presence is felt in every aspect of island life. After two weeks in the Yukon and Northwest Territories we were looking forward to this next leg of our adventure.

No one lives or visits the islands without being struck by the wild scenic beauty and the spiritual Haida culture. They say when you leave you will have the sense of having touched and experienced something sacred – you have.

We landed on Haida Gwaii in an escalating wind and rain storm. We were booked overnight in a hotel bedside the airport in Sandspit but had to make our way to Queen Charlotte across the bay at Skidegate the next morning. Standing your ground does not always work as we were about to find out. We had to catch a ferry to Queen Charlotte so had to find transportation from the airport in Sandspit. The local recommendation wanted $60 to take us there. I thought that a bit steep for a 15 kilometre drive so passed on that option. I wasn’t sure what we were going to do, I just knew I wasn’t going to pay $60 to do it.

We returned to the airport wondering if there was another option but I had forgotten there was no one at the airport until the plane came in so we were stranded. What to do? Karen said she’d go out to the parking lot and see if anyone was around. So it was we hitchhiked to Queen Charlotte – wow, it’s been a while since I’ve done that. 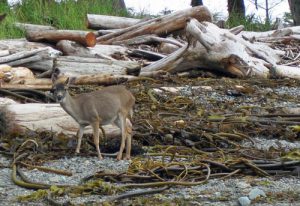 Tomorrow we’d be up at the crack of dawn to catch the 7:40am ferry for our zodiac island tour. At the ferry we were picked up by a Moresby van and driven for about one hour along the bumpy, pothole-ridden gravel logging roads of Moresby Island to Moresby Camp. Hey wait, didn’t I just do this about 10 days ago?

Moresby Camp is a boat launch close to Louise Island and the most southerly road access in Haida Gwaii. By launching at Moresby Camp, we were able to avoid the rough, exposed waters around the northeastern coast of Moresby Island.

Our tour boat was a zodiac (rigid hull inflatable) with a deep v-hull that allowed it to cut through the water while providing superior stability. It was the most comfortable small and fast boat around, however the waters of the Hecate Strait can be unpredictable so the ride can sometimes become bouncy. At times that was an understatement as I swear we were airborne more than once. 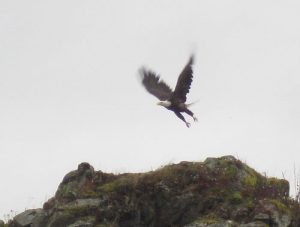 K’uuna Llnagaay, located on the northeast section of Louise Island at the head of Cumshewa Inlet, is also referred to by its older name Skedans. The name Skedans comes from a Haida term of respect meaning “from his daughter.” K’uuna Llnagaay means “village at the edge” in reference to the village’s location on a small peninsula. This was our main stop for the day.

Although the site has been uninhabited since the 1880s you can still see a number of poles standing (and some fallen) in their original locations. Today a few carved memorial and mortuary poles remain standing and the depressions and faint outlines of foundations of several longhouses gave us an idea of the former scale of the village.

We enjoyed lunch in this Haida village with our hosts. The meal was vegetarian-like and was significant because we ate with the village Haida watchmen on the scenic shore. Their feeling is the village is in the process of returning to Mother Nature and there won’t be much left to see in ten years. Letting the village’s remains return to the land over time is what the Haida see as the most natural and desired outcome. 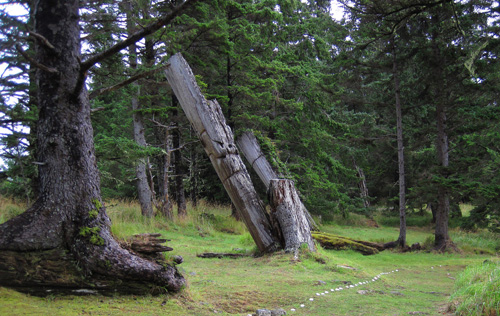 The most obvious enduring items in the village were an assortment of wood lying on the ground that appeared to be fallen trees. They were not trees but rather various types of poles. I found it fascinating because they were often covered in moss and lichens and for all the world really did look just like a fallen tree. The whole village site required a great deal of reverence and care. It was necessary to take great caution with every step. We were on sacred ground and had to treat it accordingly.

The cruise up through the channel on the far side of the island was very calm, a sight to behold. Just before entering the channel we were treated to a truly amazing sight. In the distance we all saw a very distinctive spray of mist rise from the surface of the water. Whale! You’re kidding! This is awesome!

Humpback whales are known for their spectacular acrobatic displays, though this one must have been on a coffee break. We didn’t get particularly close but a small telephoto and some Photoshop cropping yielded some respectable photos. This was indeed unexpected and made an almost perfect day one that will never be forgotten.

A day in the life of a rural Indian school

In praise of Karnataka’s useful coconuts