The jay was not perturbed in the slightest by my presence. I watched it from a distance of five yards, as it splashed about in a rather muddy puddle, then hopped up onto a fence to shake itself dry. When a car drove past, it flew away, leaving me to carry on to the riverside. There, I joined eleven others for a cruise along the River Waveney, which marked the border between Norfolk and Suffolk.

We had spent a comfortable night in the Waveney River Centre, which lies on the Norfolk side of the river. At 9.30 am, Andrew, who had done this sort of thing before, naturally assumed the role of skipper, and slowly took us out into midstream, following the wake of a six-seater boat. We were limited to a speed of 5 mph, and so relaxed into an unhurried cruise for the next few hours. 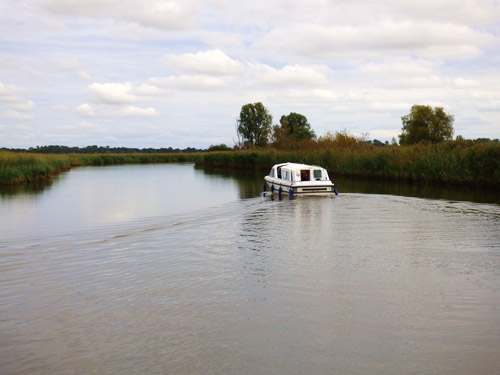 The Broads National Park comprises an area of wetlands covering around 117 square miles. It is often popularly referred to as the Norfolk Broads, though it extends into Suffolk. Within its confines are eight National Nature Reserves and more than two dozen Sites of Special Scientific Interest. For centuries, the network of rivers and shallow lakes was thought to be natural. It was as recently as the 1960s when it was realised that the lakes were artificial, having been dug by the monks of mediaeval monasteries for peat to be burned as fuel. As much of the land of East Anglia lies close to, or even below sea level, a slight rise in that level flooded the diggings to create the Broads. Over the centuries, the region evolved, partly under agricultural management, into a mosaic of pools, reedbeds, marshes, fens and wet pastures in which wildlife could flourish.

For the first kilometre-or-so of our trip, we passed through reeds that grew taller than the height of the boat, giving the impression that they stretched endlessly to either side of us. Only the occasional tree hinted of higher ground beyond. It was with some surprise, therefore, that a thinning of the reeds gave us a glimpse of fields, some of them grazed by cattle. In one of these, we spotted a Chinese water deer, a creature introduced to this country in the 19th century and now thriving in the East Anglian wetlands. At intervals, we also saw marsh harriers circling over the reedbeds, searching for small prey, as well as lapwings, mute swans, herons and a pair of pink-footed geese, probably migrants from Scandinavia. 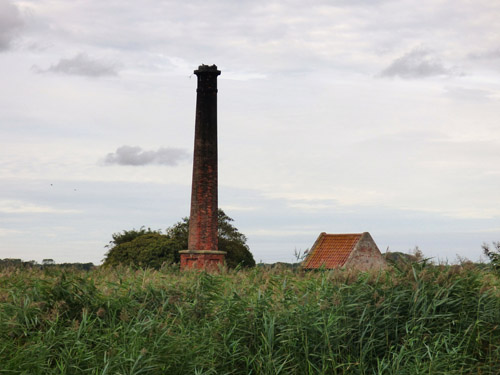 We passed Black Mill, a tall, brick chimney and adjacent building, that were all that remained of a 19th century steam engine house and turbine, one of only two still to be seen in the Broads. These replaced the windmills that had previously been employed to pump water off the land. A short distance farther, we sailed past a preserved windmill, only the top half of which was visible above the reeds.

We came to Somerleyton railway bridge, the first of two swing bridges built during the early years of the 20th century, that could be opened to allow the passage of tall yachts and Norfolk wherries. The bridge appeared low, but gave ample clearance to our boat and the larger one that passed us travelling in the opposite direction. By now, the river banks had assumed less of the wilderness appearance and were dotted with houses, some of them quite large, with gardens that reached to the water’s edge. 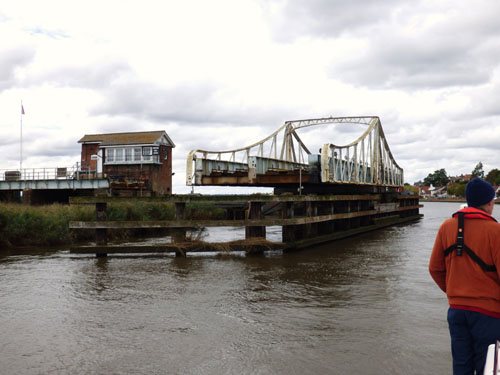 Approaching St Olave’s, we reached a Y-junction. Rather than follow the River Waveney along the right fork, which led to Great Yarmouth, we continued beneath a high road bridge onto the New or Hadiscoe Cut, a 2-kilometre straight stretch of canal opened in 1833 to link the Waveney with the Yare and shorten the sailing distance between Norwich and Lowestoft. The proximity of the parallel railway track linking the towns became obvious when a train passed us within metres of the river bank. A view opened out across flatlands, with horses grazing and churches and windmills marking the horizon. A flock of linnets flew over, followed by a cormorant.

We reached the junction with the River Yare, and followed its more meandering course past the second swing bridge and the village of Reedham, with its riverside dwellings and flotilla of small boats. On arrival at the Reedham ferry, the only working chain ferry in East Anglia, we pulled in to the bank to enjoy a leisurely lunch at the eponymous inn, a cosy and very welcoming venue, in which boating and fishing utensils decorated the low, wood-beamed ceiling. 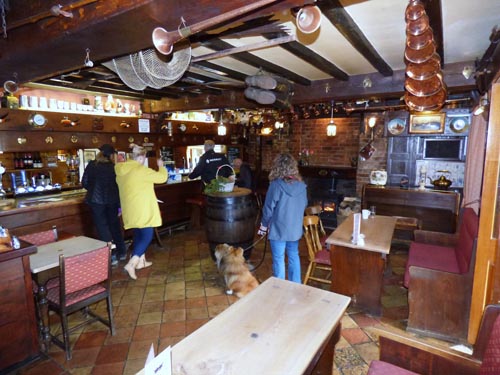 On the return trip, I volunteered to take the wheel for a few kilometres. The speed was controlled by a hand throttle, which I used to maintain a sensible distance from the small cruiser in front. The steering was less responsive than on a car, so I had a tendency to over-compensate when nothing appeared to happen. However, the river was broad enough and the traffic almost non-existent, so there were no real dangers, and I managed to maintain a line roughly in midstream. About a kilometre from the terminus, we passed a yacht tacking upriver. I handed the steering back to Andrew, who brought us safely back to the Centre.

The Waveney River Centre (https://www.waveneyrivercentre.co.uk/) is a well-designed holiday complex, catering for all accommodation requirements. The Inn has seven spacious rooms for those who like a little luxury. Elsewhere on the site are apartments and lodges for guests who prefer self-catering, and yurts, pods, caravans and camping areas for budget-conscious visitors. All guests can use the dining facilities of the inn and the on-site swimming pool. Canoes and kayaks are for hire, as well as the cruisers. 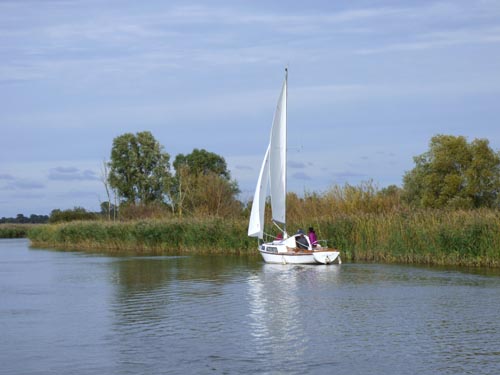 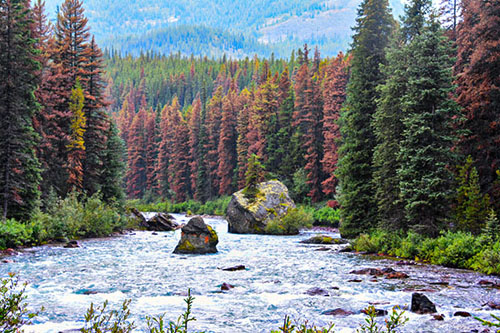 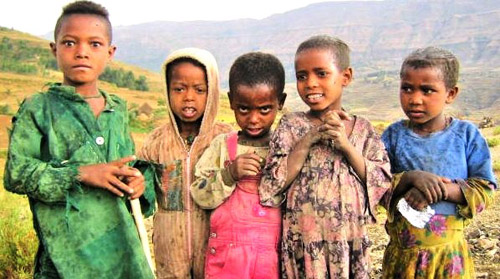 Lost – and then found – on the way to Lalibela