In mid-September we set out for Stehekin, a little hidden gem nestled in the heart of America’s North Cascade Mountains. This isolated rural settlement is located at the headwaters of 50-mile-long Lake Chelan in Washington State. There are four ways to reach Stehekin: on foot, by horseback, floatplane or boat. It is a place where no roads can take you. 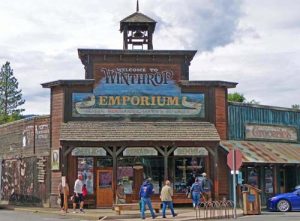 En route we stayed for a few days in Winthrop which in the late 1800s was a small American Frontier town in the Methow Valley. A number of years ago the town was reinvented to emulate its early days. Today Winthrop’s main street is bordered on both sides by uneven wooden boardwalks. We strolled around popping into a fascinating array of shops, galleries and restaurants, all with storefronts in the style of the Old West. Even the bank and the gas station replicated Victorian-era architecture. Later on we climbed the steep wooden stairway to the Shafer Historical Museum to view how the early settlers lived and worked. Displays included an authentic homestead, an old schoolroom and a large display of antique farming implements. As we wandered around, we encountered a group of “steampunk” enthusiasts, all of whom were attired in classic Victorian clothing with at least one prominent accessory such as goggles, parasols and top hats.

The following day we attended the 80th anniversary of the first smokejump in Winthrop. A smokejumper is a firefighter who parachutes into remote and rugged terrain to extinguish forest fires. To honour the occasion, these specially trained wildfire experts executed a practice jump. At the sound of the siren, they suited up in multi-pocketed jumpsuits and donned helmets with front cages, special boots and gloves.

Within 10 minutes they were ready to board the airplane. Moments later, we watched as the parachutists floated down to the designated target. To us spectators, they seemed to hit the ground with a hearty thump but all safely rolled in a “parachute landing fall”.

We continued onward to Lake Chalen. Chelan itself is nestled on its southernmost shore. Here early on a clear sunny morning we boarded the Lady of the Lake II. Vineyards and orchards dotted the hills on either side of this narrow lake. As the boat gently chugged its way uplake, the mountain slopes became steeper. There were fir trees everywhere. Some marched soldier-like along the high ridges, some were arbitrarily scattered on the precipitous rough terrain, others clung to life precariously close to the water’s edge, and yet others were charred and blackened reminders of a devastating wild fire. The weather changed, too. Gone was the morning’s calm azure blue water. Now small white caps danced on the lake’s steel grey surface. Threatening clouds swirled overhead. Rain was imminent.

During the four-hour trip, the Captain provided the occasional succinct commentary. He told us that Chelan was the third deepest lake in the nation and, if it were drained, it would cover the whole of the State with 4½” of water. Later on he pointed out Domke Falls where gushing white water cascaded down the mountainside. Continuing, he told us that Stehekin was a Native American word meaning “the way through”. Formerly, it represented one of few travel routes connecting the State’s interior wilderness to the North Cascades. Today Stehekin is many things to many people. It’s a mecca for backpackers hiking the Pacific Crest Trail. For visitors and residents, it’s an escape from the hustle of the modern day world. It’s a peaceful community suspended in time where only one paved road and one stop sign exist.

By the time we docked there were dense clouds overhead and a steady rain was falling. We checked into a cozy log cabin at the North Cascades Lodge. It was time to relax, enjoy a tasty lunch and slow down. Around mid-afternoon the sun peaked through the clouds so we decided to stroll along the Lakeshore Trail. We passed several solitary cabins where firewood had already been stacked for the winter. A carpet of pine needles covered the pathway releasing their characteristic aroma. Across the lake were jagged peaks rising to over 9,000 ft. Looking back, we got a peek-a-boo view of Buckner Glacier, just one of the area’s 300 glaciers.

The next day we hopped on the “Red Bus” for a narrated tour to picturesque Rainbow Falls where water gushes down a 312 ft. cliff. We stood on the viewing platform where a light mist sprayed gently over us. Driver Steve told us that in 1897 a branch of the US Post Office was opened and the road was built by homesteaders. Mining and logging first attracted people to the community but soon tourism topped the agenda. He pointed out “The Garden” where local resident Karl cultivates a large fruit and vegetable garden and also raises goats and honey bees. Two miles up the road was the Pastry Company with its large selection of fresh pastries and breads.

Then tucked away in the trees was the Old Schoolhouse where for over 65 years children learned their ABCs before it closed in 1988. These were just some of Stehekin’s hidden gems. Steve told us that the community has no doctor and that most medical emergencies are looked after by the park rangers. There is a small power station but many of the 90 full-time residents have their own portable generators. That evening we visited the Stehekin Valley Ranch. Every evening, a sumptuous community-style meal is served. The menu included roast beef, chicken, salmon or vegetarian options followed by a large selection of homemade pies. After a stimulating day in the mountain air, we hungrily gobbled everything up.

The warning horn of the Lady Express sounded as it approached the dock. Reluctantly, we stepped aboard for the return journey to Chelan. Leaving the wharf, the boat gradually gathered speed. For three days we had reveled in being off the beaten track and had been awed by the quiet serenity of this remote paradise. Behind us Stehekin slowly faded into the distance. 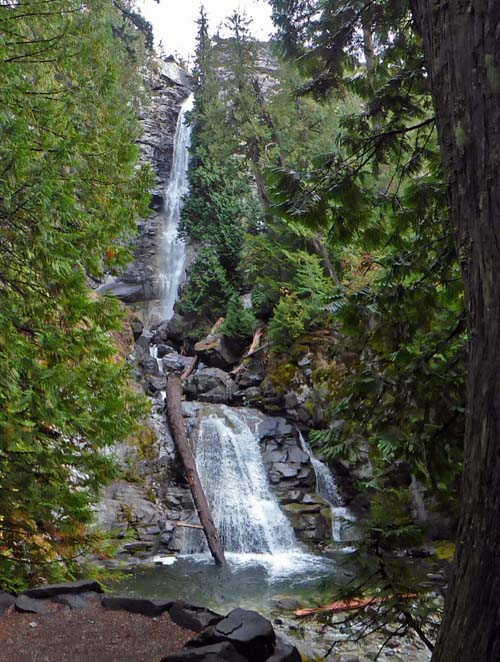 All aboard for a vegetarian cruise