Yes, it is possible to see the highlights of Athens even if you have only one day. And you will have time for lunch in the old city, Plaka. Here is how to do it.

Start by familiarizing yourself with the metro. It is much faster than buses and taxis, and it also spares you from having to deal with cab drivers who will swindle even the most sophisticated traveler out of their euros without batting an eyelash.

Your first stop should be the Acropolis while you still have plenty of energy. Go early in the morning because it can get very hot up there, and the lines to buy a ticket will tire you out before you even get started. Take the Red Line to the “Akropoli” stop. The station exit is conveniently located a block or so away from the ticket booths. From the Acropolis, it is a relatively easy (and downhill) walk to Plaka and Syntagma Square. Or take the metro and get off at “Monastiraki” and “Syntagma”.

“Acropolis” is a generic term meaning a citadel or fortified area of an ancient Greek city, typically built on a hill with very steep sides and serving defensive purposes. There are many acropoleis in Greece, but most people associate “Acropolis” with the one high up in the ancient fortified area of Athens. The one in Athens is the one with a capital “A”.

The significance of this particular acropolis stems from its age—dating back to the 5th century BC—and the magnificent structures built on it. These include the Parthenon, said to be one of the finest examples of classical architecture.

As the excitement and anticipation build, a sign announces that you are now entering the “heart of Ancient Athens”, the place where “the most essential aspects of the European identity emerged: Democracy, Philosophy, Theatre, Sciences, Arts. EUROPE STARTS HERE!” I am psyched. 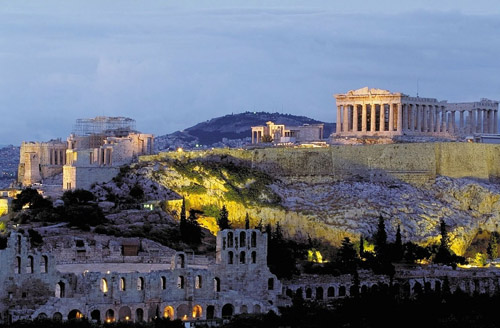 We start along the path leading up to the Acropolis and are encouraged. The incline is slight and there are shade trees along the side. But don’t be fooled. It is a long daunting way up to the fortress-like setting at the top. Keep a close watch for where you step because the gently sloping pathway quickly turns into a steep, hazardous, and slippery marble staircase. Watch out for the person in front of you—they may stop suddenly and without warning to take a sip of water or to take a photo. A collision up here could be disastrous.

Along the way, you will pass the ancient stone theater, Odion Theater of Herodes Atticus, on the southwestern slope. This is a concert venue and a spectacular setting when it is lit up at night. The semi-circular amphitheater appears to have been carved out of the natural rock and faces a 28-meter-high stone structure with arched openings that at one time held statues. It was built in 161 AD by Herodes Atticus in honor of his wife and is considered to be the birthplace of European theater.

The Propylaea is the first set of structures as you reach the Acropolis. It and the other buildings up here at the apex were built to thank the gods and celebrate the Athenian victory over the invading Persians. It marks the entryway to the temple complex and today can be identified by the numerous columns and steep walkways. It is a building of the Doric order with a few Ionic columns. I make note of the columns outlining what once must have been a fabulous structure, but what I remember most is the winding and slippery marble staircase used to ascend to the top. Crowds make their way up, taking care to drink plenty of water and not lose their balance. It feels dangerous but exciting. 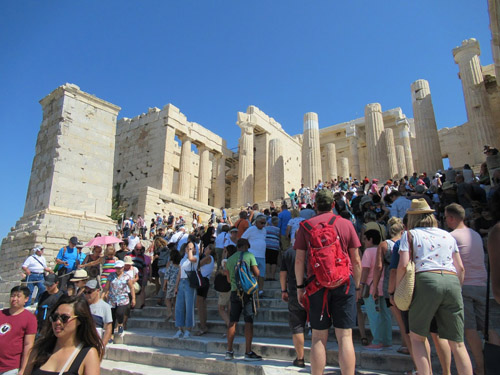 Once you reach the peak and emerge from the Propylaea, the three-quarter view of the Parthenon is awesome. One of the glories of Western architecture, this majestic showpiece of the Acropolis was built to be the focus of the building complex. It was built in the fifth century BC as a temple to Athens’ patron goddess, Athena, the Greek goddess of wisdom and war and was meant to house an immense statue of Athena that was made out of gold and ivory by the famous sculptor Pheidias. This statue has been lost since the Roman Empire conquered Athens in the second century BC.

The sky is a perfect clear blue and the structure, made out of 22,000 tons of white marble, stands out brilliantly against it. It has fifty Doric columns arranged in perfect classical order, and the top is open to the sky because of a fire that broke out in the 3rd century AD and destroyed the roof and most of the sanctuary’s interior.

The Erechtheion also is of the Age of Pericles, the 5th century BC. It is the elegant building to the left of the path leading up to the Parthenon and is distinguished by six caryatids, fluted pillars of draped women who hold up the roof over the porch. These are exact copies of the originals which have been removed to the Acropolis Museum and the British Museum in order to prevent further decay. Named for Erechtheos, a mythological king of Athens, the temple has over its long history been used as a church, a palace, a harem, and a military powder magazine. It was restored after Greece gained her independence from the Turks in 1821.

Stop to take a breath and look around at the majesty before you—the juxtaposition of the ancient structures up here and the magnificent modern city below.

The building off to the right of the Parthenon is the Temple of the goddess, Athena Nike. Early in its history, the temple was used as a worship place for deities. It is considerably smaller than the other temples on the Acropolis and its parapet was used to defend the Acropolis from military attack. It also served to prevent people and objects from falling over the steep edge. 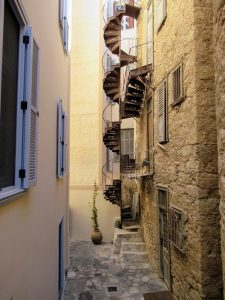 Sitting at the base of the Acropolis is Plaka, the “old town”. This is a picturesque area of narrow winding streets, shops, restaurants, and interesting neoclassical churches and buildings. The two main roads through Plaka are fairly flat, whitewashed, and mainly for pedestrians. But side streets can be challenging. Many are built on the side of the Acropolis and consist of a series of steep staircases leading up. Notwithstanding the inconvenience, shops and restaurants have sprung up on these vertical “streets” and are doing a lively business. Shop doors open onto the steps, and restaurants set up tables here, an unlikely but charming spot for an outdoor patio. We stop to admire how they use every inch available to them, our mouths watering at the sight of luscious Greek salads being delivered to the patrons sitting out here.

The Athens Cathedral of the Annunciation, popularly known as the Metropolis, sits in the main square of Plaka. Marble from 72 demolished churches was used to construct the massive walls of the cathedral. Next to it is a tiny Byzantine-era chapel, known as the Little Metropoli. It was built at the turn of the 13th century on the ruins of an ancient temple using old stone and monuments taken from earlier churches.

Tourist shops generally are pretty much the same everywhere, but you will find here the occasional artist-owned gold shop that offers exquisite hand-designed gold jewelry at a fraction of the price you would pay in the States because the cost of labor is so cheap here.

Handmade sandals are also popular. The workshop of Stavros Melissinos is especially unique. Stavros is called the poet sandal maker and he, along with his son Pantelis, has been writing poetry and making sandals here in Athens for over sixty years. His designs are based on the footwear of notables such as Socrates, Plato, and Helen of Troy and his clients include the Beatles, Jacqueline Kennedy-Onassis, Barbara Streisand, Rudolph Nureyev, and Sophia Loren. I bought some of his sandals twenty-five years ago and am still wearing them. 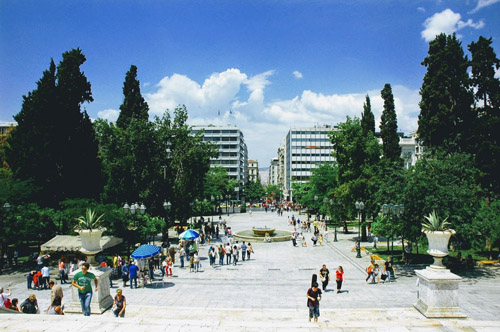 Syntagma (Constitution) Square is a few blocks down the hill from Plaka. It is the heart of the city, near many tourist destinations and a common meeting place as well as the scene of occasional demonstrations. Close-by is the Greek parliament building and the tomb of the unknown soldier. The old world and luxurious Hotel Grande Bretagne sits on the northwest corner of the square and is a nice place to stop for dessert and a cup of tea.

A moving shrine to people who have died in war, the Tomb of the Unknown Soldier, sits above Syntagma Square. It is a simple monument that was designed and built in the early 1930s and is guarded by the Evezones, the elite force of the Greek army and part of the Presidential Guard. Standing proudly above the Tomb is the old Royal Palace, built in 1843 as the first modern royal palace and, since 1934, home to the Greek parliament. 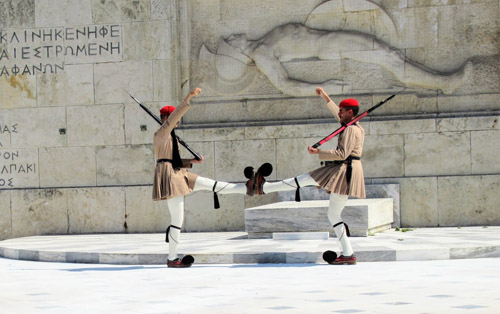 Periodically the two guards on duty perform a series of maneuvers to honor the dead. They wear red hats, taupe suits, white tights, and white shoes adorned with black pompoms. Their maneuvers are uniform and well-orchestrated, as though to the beat of music, and last for about thirty minutes. You cannot help but feel moved to honor the fallen heroes. A ceremonial guard change occurs every Sunday at 11:00 am when marching bands and the Presidential guard parade from their barracks behind the parliament building. 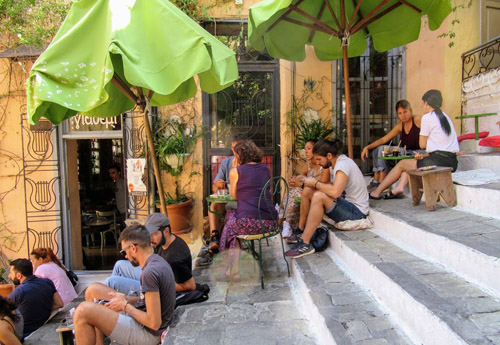 About the author: Elizabeth von Pier loves to travel. After she retired from her lifetime career in banking, she has been traveling the world, photographing, and writing. She has been published in the Los Angeles Times and many online travel magazines including In the Know Traveler, Go Nomad, WAVEjourney, Travelmag—The Independent Spirit, and Travel Thru History. She also recently published her first book, “Where to Find Peace and Quiet in London” and is now working on another volume in this series, “Where to Find Peace and Quiet in Paris” which is expected in 2020. Ms. von Pier lives in Hingham, MA. 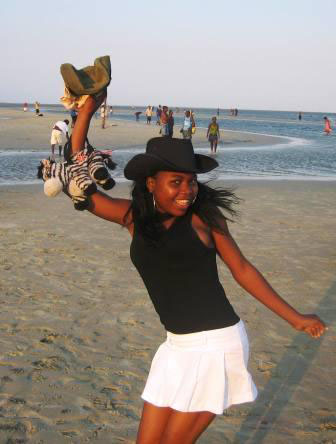 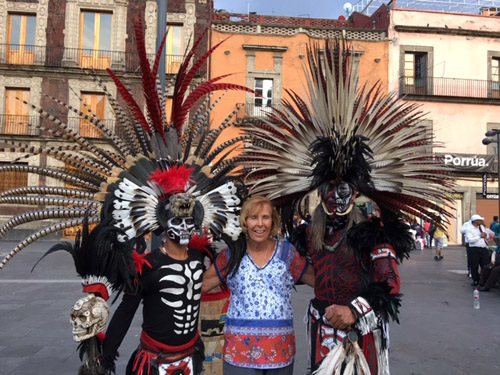 An immersion course in Spanish in Puebla, Mexico